Today, one of the most exciting new motorcycles of 2017 came out. Triumph’s next-generation Street Triple 765 S was released in India at an introductory price of Rs 8.5 lakh (about $13,500) ex-showroom, Delhi. We told you a few days ago when you could start making reservations for this bike. The new Street Triple is sold in three different styles around the world: S, R, and RS. By the end of 2017, the R and RS models will be available in India.

The Street Triple 765 has a brand-new 765cc, three-cylinder engine, as the name suggests. In the “S” version, this motor makes 113PS of power at 11,250rpm and 73Nm of maximum torque at 10,421rpm. The torque number is about 30% higher than the previous model. The news that this engine will be used in Moto2 race bikes starting in 2019 is the cherry on top. Click here to learn more. 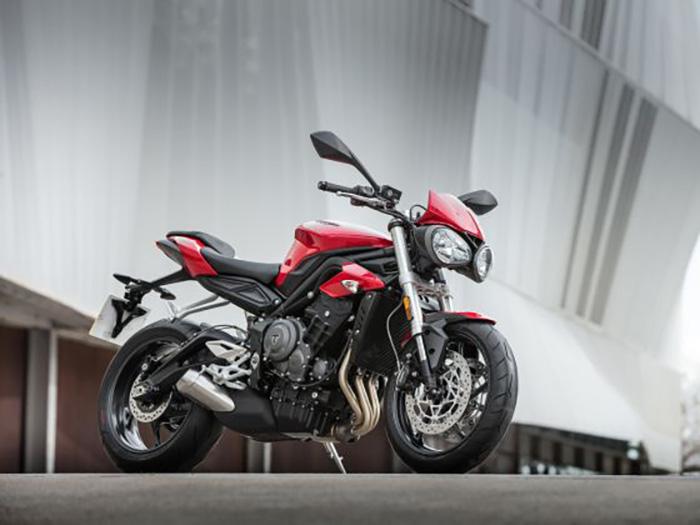 The Street Triple’s suspension is made of high-quality parts. This has upside-down Showa 41mm front forks and a Showa mono-shock with a piggyback reservoir at the back. At the front, there are two 310mm discs with Nissin callipers, and at the back, there is a single 220mm disc with a Brembo single-pot calliper. The bike also has a new rear swingarm with a gullwing shape. This is said to make the bike more stable at high speeds.

The company says that this motorcycle, which weighs 166 kg (Dry weight), is the lightest in its class. This means that, even though it has a bigger engine and meets Euro-4 emission standards, it is about 2 kg lighter than the previous model.

In India, there are two colour options for the Street Triple S: Diablo Red and Phantom Black (Metalic). Names like the Kawasaki Z900, the Aprilia Shiver 900, the Ducati Monster 821, and the Ducati Monster 797 were among its rivals. All of these bikes have a lot of power and are fairly new to the market. So, right now, the market for high-performance naked bikes is very hot.

Bad Oil Pump Symptoms
While Using Cruise Control, Can You Still Use The Brakes?
Dashboard Warning Lights
Is Motor Oil And Engine Oil The Same