Even though the features of the new Ciaz have changed, the variant spread has not. For new Ciaz, there are four different kinds: Sigma, Delta, Zeta, and Alpha. All of these can be bought with either a gasoline or diesel engine.

The price of a fully equipped diesel Ciaz Alpha is Rs 10.97 lakh (ex-showroom). Aside from a new look on the outside, the new Ciaz also has more safety and luxury features. Plus, it has a new gasoline engine.

In India, the Maruti Suzuki Ciaz will compete with cars like the Honda City, Toyota Yaris, Hyundai Verna, and VW Vento. Last month, Maruti put out a teaser video for the Ciaz. 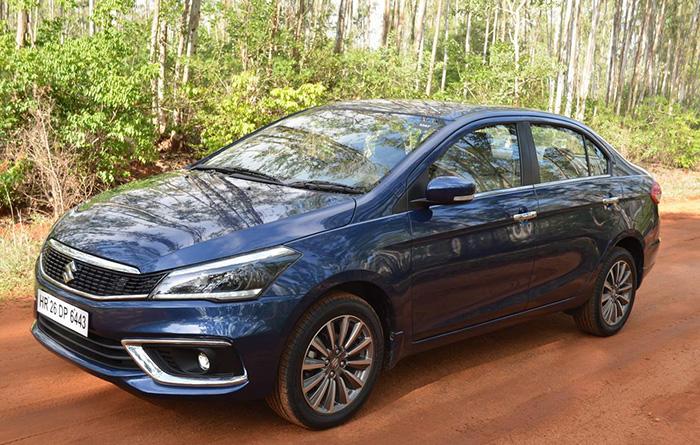 The outside of the new Ciaz has changed a lot, but the shape is still the same. Almost every time a car gets an update, the lights are the first thing that gets changed. The same is true for the Ciaz.

The 2018 Ciaz gets new Projector headlights with daytime running lights (DRLs) and LED taillights. Also, the front grille has been changed to look smoother. It has a chrome border around the front grille and fog lights. Now, there are more lines on the front bumper. The new Ciaz was seen in Spain last year.

The inside of the car hasn’t changed much. The inside is still beige, but the fake wood inserts make it look better. The steering wheel has also been changed, and it now has buttons for controlling the music.

Maruti Suzuki is betting big on the fact that most of its cars have Apple CarPlay and Android Auto. The Ciaz is the same, and it has both of these ways to connect to a phone.

Now that the software has been updated, the driver’s instrument console has a new screen. The small digital screen between the two analogue displays has a high resolution and shows a lot of information.

If you think all of the above updates are just small changes to the way things look, then this should impress you. The new 1.5-liter petrol K-Series engine with mild hybrid technology is the biggest change for the 2018 Ciaz.

The other engine choice is a 1.3-liter turbocharged diesel engine made by Fiat. This engine makes 90 PS of power and 200 Nm of torque.

The safety features have been updated a lot, and now automatic versions come with ESP (electronic stability programme) and Hill hold function as standard. The speed alert system, the passenger seatbelt reminder, and the reverse parking sensors are now built in. Aside from this, it has ABS, EBD with brake assist, and two airbags, all of which were already in the Ciaz that was sold before.