Since 2016, when it was first seen, we’ve been waiting for the new BMW Z4. At the Pebble Beach Concours d’Elegance in Monterey, California, BMW finally showed off the third generation of the Z4. At the 2018 Paris Motor Show, the new BMW Z4 will also be shown.

Since the beginning, BMW has been very open about the fact that the new Z4 will be made with Toyota’s help. And the next Toyota Supra will use the same platform and a lot of other parts, like the suspension and wiring. When was the last time you saw a German car company and a Japanese car company work together on something like the BMW Z4? The seventh-generation 3-Series will also be built on this platform, which was just made.

BMW wanted the new Z4 to be more fun to drive and have more power than the old one. BMW says that the 30 percent increase in torsional rigidity over the old model is a big reason for this. The chassis was built with extra-wide sills that made this possible. BMW says that the new Z4 roadster’s chassis is stiffer than that of the M4 Coupe. 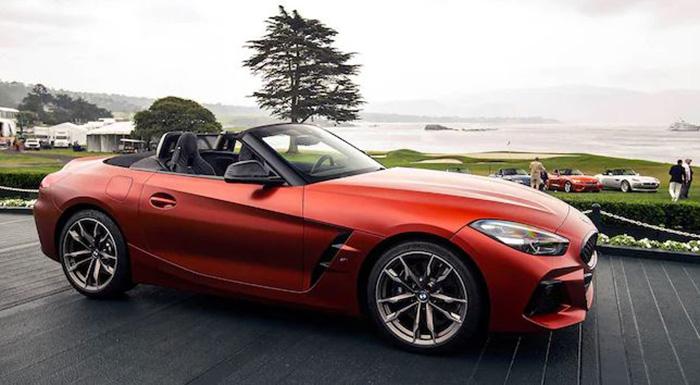 “All-new” is a word that’s thrown around a lot, but it’s true for the new Z4. It’s a totally different kind of car. It has a new design, platform, engine, and inside.

The old BMW Z4 had a convertible hard roof, but the new one doesn’t. Instead, there is a convertible fabric roof that opens and closes quickly and weighs 60 kg less than the hard top roof of the previous Z4. Still, this has caused quite a stir among Z4 fans, since most of them really liked the hard top roof because it makes them feel safe.

BMW made this choice to lower the Z4’s centre of gravity and make it easier to drive. The chassis is pretty rigid on its own, so it didn’t need a roof to hold it together. BMW says that this makes the car “more sporty to drive.”

BMW is still a true roadster, with the engine in the front and the wheels in the back. But the engine is moved farther back so that the front and back weights are equal. There won’t be an M-series Z4, but the top-of-the-line Z4 M40i Performance First Edition comes close. It even has a rear differential that can be controlled by a computer.

The new BMW Z4’s interior stays true to the theme of putting the driver first. The dashboard almost looks like the ones in BMW sedans. There is a sporty three-spoke steering wheel, a touchscreen centre console with updated software, and all-new seats. With this new platform, the Z4 will have a long list of options.

The best feature The BMW Z4 M40i has a 3.0-liter, six-cylinder, in-line, turbocharged gasoline engine. In Europe, this engine makes about 340 PS of power, and in the US, it makes about 380 PS. The amount of torque is 450 Nm.

When comparing the engine output of the new model to that of the previous generation, the power has gone up by 40 PS and the torque has gone up by 50 Nm. A turbocharger is a big part of the reason for this.

The new Z4 will also come with two other engine options: the sDrive20i and the sDrive30i. Both will have a 2.0-liter four-cylinder turbocharged gasoline engine. It will make 152 PS of power and 250 Nm of torque in the Z4 sDrive20i. The power output of the Z4 sDrive30i will go up to 264 PS, and the torque will go up to 390 Nm.

The gearbox is likely to be a ZF automatic unit with eight speeds. There is also the option of a six-speed manual transmission, though.

The BMW Z4 M might come out in the future. We’d love to see an M2 Competition engine put into the new Z4, which would give it 420 PS and 550 Nm of torque.

Next year, BMW India might bring the new Z4 to India. This will go up against the Porsche Boxster S very well. India sold a top-of-the-line version of the BMW Z4 from the previous generation that had 306 PS of power and 400 Nm of torque.

How Long Do Jeep Wranglers Last
How Long Does An Oil Change Take At Walmart
Do Car Batteries Charge or Drain While Idling?
Two Bedroom Fifth Wheel Reviews