If you’re like me, you still drive around with a CD sleeve attached to your car’s visor, and the thought of giving up your tried-and-true road tunes for a “upgraded” MP3 system just doesn’t get you excited.

When it was finally time for me to get a new car, I was really hoping I could find one that was new but still had a CD player.

It took me longer than I thought to find a new car with a CD player.

Most new cars don’t have CD players anymore. Instead, they use Bluetooth and streaming services to play music. However, some manufacturers still offer CD players as options. Some of the cars made by Toyota, Honda, Nissan, and Ford still have CD players.

The two most popular services that seem to have replaced CD players in modern cars are Android CarPlay and Apple Music.

A lot of new cars won’t have CD players anymore. That’s because GM and a lot of other companies stopped putting them in.

Even so, Toyota still puts them in some of their cars. There are also a few others who do!

And if you still have CDs, you have a few ways to play music in your car. You don’t have to have a CD player in your car to play them. 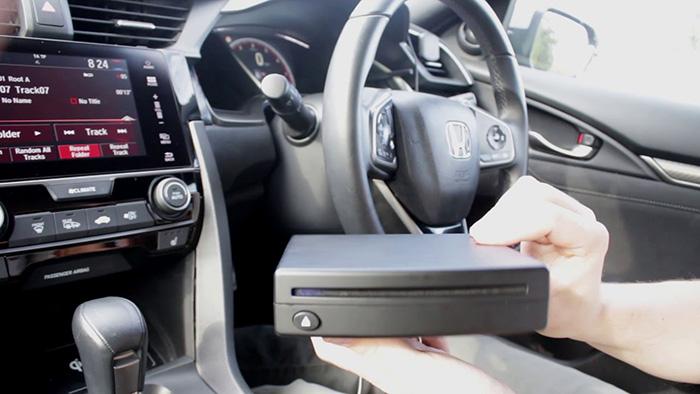 If you want a new car that still comes with a CD player from the factory, I’ve got a list for you.

CD players can still be found in Toyota, Honda, Nissan, and Ford.

They can be found in the Toyota Sienna, Highlander, Prius, and Camry.

Families should look into the Toyota Sienna. It has a lot of room. You can also still play all your CDs on them.

A CD player can also be added to the Toyota Highlander. It also has a 4-wheel-drive system.

Not all Camry trims, though, come with a CD player. So, you should call your dealership to find out if yours will have one.

People who want a hybrid car and like the Prius are in luck. Also, some of them have CD players.

CD players can be put in the Honda Crosstour, Odyssey, and HR-V.

There are 5 different trims for the Odyssey. Not all of them, though, have a CD player. Before you buy a car, check with your dealer to see if they have one with a CD player.

It’s a good choice for people who want a minivan.

A 6-disc CD player is built into the Crosstour. But no one has made them since 2015. So, if you want one, you’ll have to buy a used one.

The CD player is built into the HR-V, which is a small SUV.

CD players can also be added to the Nissan Rogue Sport, Frontier, 370Z, and Juke.

The CD player is still in the 2020 Rogue Sport. It’s a great choice for people who want a small SUV.

A CD player can also be added to the new 370Z. You might want to drive one if you like fast cars.

The CD player is in the Juke. It also has a great turbocharged engine. If you want a turbocharged SUV, you won’t find much better than this.

CD players can also be put in the Ford Mustang, Fusion, Taurus, and Fiesta ST.

When Did They Stop Putting CD Players in Cars?

Around 2015, car companies stopped putting CD players in their cars. But they didn’t all stop at the same time.

It looks like Ford plans to stop making it after 2022. But for now, they still have a few vehicles with them.

Why Did CD Players Go Away?

There were a number of things that led to the death of the CD player.

Manufacturers usually say that they take up too much space. Now, they can put a lot of other things in them instead.

The CD player died because of Bluetooth.

People can connect their phones to their cars using Bluetooth. A CD player takes up a lot more space than a Bluetooth module.

That frees up space in the car for other things.

Streaming services would be the next big thing.

These automatically connect to your phone. So you don’t need to change the Bluetooth settings.

Apple Music and Android Carplay are two of the most used services. Both Android and Apple phones can connect to these.

There are still a few things you can do if you want to play a CD.

You could buy an aftermarket part to have it put in.

Your car could get one of them from a shop that sells aftermarket parts. They will also connect it to your sound system.

You’d have to buy parts made by a third party. You’d also have to pay them for their work.

You could also buy a USB CD player as an alternative.

You can plug the CD player into the USB and connect it to the car’s sound system.

All you have to do is buy the parts. You can then put a CD in the CD player. After that, you just use a USB cable to connect it to your car.

It will let you listen to it just like if you plugged your phone in. That’s usually the least expensive choice. Most modern cars can also work with USB CD players.

The Demise of CD Players

When it comes to convenience, MP3 files are much better than CDs.

They are much lighter and can’t be scratched. So, CD players are no longer in most cars.

CD players aren’t worth the space they take up.

If you don’t have a CD player, you can have a much bigger screen for entertainment. Taking out the CD player also brings down the price of a car.

If you have a smartphone, you shouldn’t miss having a CD player. Using a streaming service, you’ll be able to connect.

This lets you listen to music in the car right from your phone.

Still, some new cars don’t have done away with the CD player yet.

Nissan is one of the most well-known companies that makes them. Check with the Honda dealer near you as well. In 2021, some of them will also have CD players.

How Bump Start Car Automatic Transmission
What Are The Functions Of A Crankshaft Seal?
Should You Replace Or Repair A Drive Shaft?
How Many Miles Is A Quarter Tank of Gas?