In the realm of automobiles, the Nissan Z is an extremely unusual breed. Creating a desirable and popular sports car is a challenge in and of itself, but to do it for nearly half a century is simply remarkable. It ranks right up there with the Skyline as one of Nissan’s most recognizable models.

The new Nissan Z will begin production in 2022, so now is a great moment to look back at its predecessors and see how they stack up against each other.

The 350Z and 370Z may look alike on the outside, but there are significant distinctions between the two. Since its predecessor was discontinued, Nissan has been working hard to improve upon the 370Z’s performance and powertrain. 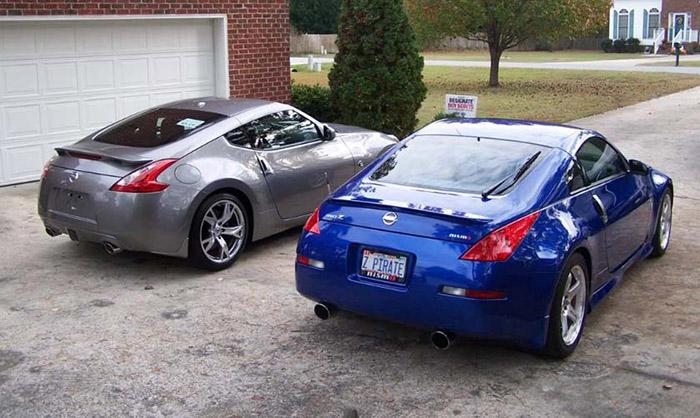 Since their inception in 1969, the Z Cars have been a popular line of high-performance sports cars. The displacement of the engine is indicated by the three digit number preceding the letter Z. Nissan’s 240Z, 350Z, and other models all have two-liter engines. Fairlady Z was used to refer to a wide range of models, including those with a 2.0L engine, on the domestic market.

The S30 codename was used for the first generation, which was manufactured between 1969 and 1978 in four different versions.

240Z, 260Z, and 280Z Fairlady Z models. Both in Japan and abroad, these vehicles gained household names as Datsun automobiles.

Throughout the years of production, the engine size and power have steadily increased, from the first 2. 0L engine in the Fairlady Z to the 2. 8 liter inline six engine in the 280Z.

Second-generation grand tourers strayed away from the basic sports car formula in favor of a smoother, more luxurious interior. The second generation, also known as the Datsun 280ZX and Nissan Fairlady Z, was manufactured from 1978 to 1983 under the codename S130/Z30. It was possible to get either the naturally aspirated or turbocharged versions of the 2.0-liter and 2.08-liter engines.

The third-generation Fairlady was the first mass-produced V6 engine in Japan and received a considerable upgrade to minimize drag. A 3. 0L V6 engine, which was also featured in the 300ZX model, was available as an option for the Z31 model from 1983 until 1989.

The Datsun brand was discontinued during the production of the Z31, and all following Nissan vehicles were renamed as such.

This iteration is commonly regarded to as the second generation of 300ZX because it still uses the 3 liter V6. Z32’s V6 engine, on the other hand, had a substantial impact on its peak speed and acceleration.

It was reworked with a flushed style typical of this time period, removing the pop up headlights. The manufacture continued from 1989 to 2000, but it was less successful than the preceding model’s production run.

The sixth generation 370Z replaced the 350Z and lasted from 2009 until 2020 in production. Redesigning the Z34 model, the 3. 7L V6 engine was introduced. It was one of the last automobiles built in the old-fashioned method, with a manual transmission and a naturally aspirated V6 engine.

A new model simply known as the Nissan Z will mark the start of the seventh generation. Because it has the same underpinnings as the 370Z, it’s been given the codename Z34. However, the new model has been said to be extensively reworked to overcome the limitations of the outdated platform. 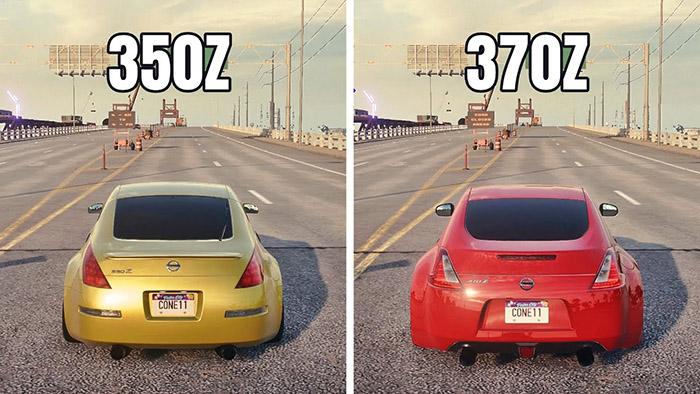 To compare the 350Z and 370Z, we’re not comparing two cars that were manufactured at the same time, but a predecessor and a successor.

The 370Z is a direct replacement and improvement over the 350Z, thus this comparison will emphasize the differences and assist car aficionados make an informed choice.

Front mid-engine, rear-wheel drive layouts are common to both models, which are built on the Nissan FM platform.

The Z cars require high performance, which is why the engines were constantly improved to produce greater power. There are two V6 engines in the 350Z and 370Z, one for the 350 and one for the 370. A new engine was even added to the 350Z during its second half of manufacture.

The VQ35DE engine is available in two different configurations.

The standard 287 hp and the ‘Rev up’ 300 hp The Track and 35th Anniversary Edition trims, which came available with a 6-speed manual transmission, debuted in 2005 with the stronger engine.

All models with manual gearboxes were given the ‘Rev up engine’ in 2006, while the 287 horsepower engine remained in use with the automatic.

VQ35HR appears to offer only minimal gains over the VQ35DE in terms of performance. In order to achieve this ‘High Revolution’ engine’s 7, 600 rpm redline, 80 percent of the engine’s internal components had to be redesigned.

The torque curve of the VQ35HR is flatter and greater at lower rpm than that of the VQ35.

With just one engine, the 370Z’s transmission options are limited to a 7-speed automatic and a 6-speed manual. For the 370Z NISMO edition, NISMO, Nissan’s in-house tuning company, worked to build the most powerful production Z Car.

For the 40th anniversary of the Datsun 240Z’s premiere in the United States, a special Black Edition was created. Only 370 Black Edition 370Zs were supposedly produced, making them incredibly sought after and uncommon.

The genuine performance of an automobile can’t be determined solely by its engine power. The vehicle’s weight, suspension, and transmission speed all play a role in determining its overall performance.

In both coupe and roadster configurations, the 350Z is somewhat heavier than the 370Z. Both cars weigh between 3,200 and 3,500 pounds, depending on their trim and body style, but I won’t get into specifics.

When it comes to acceleration times, the 370Z beats out the 350Z by half a second. Because of its improved power-to-weight ratio, the 370Z was designed to be wider in order to provide the driver more control.

Next to performance, suspension design is the most significant difference between 350Z and 370Z.

The 350Z, on the other hand, has a higher handling and cornering capability thanks to its twin ball joint system.

The 350Z’s suspension may not be a strong suit in the eyes of a buyer in 2022. The 370Z’s suspension, on the other hand, is far more commonly available and less expensive to replace than the unique design of the 370Z’s body.

Which One Should You Buy? 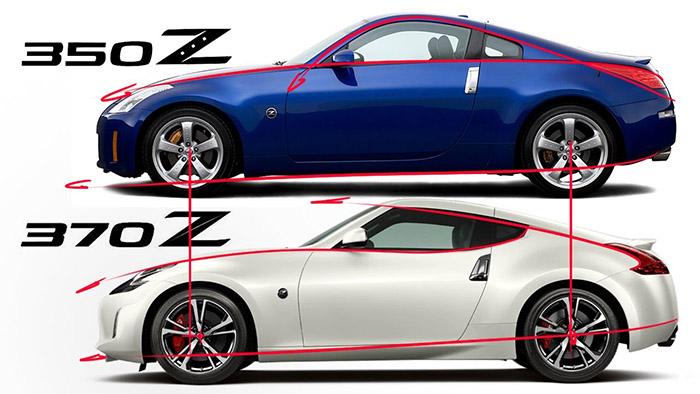 You won’t be able to choose between the 370Z and 350Z like you would a daily driving. Before we get into the specifics of buying a sports car, let’s have a look at the current market values.

The year and mileage of the 370Z have the greatest impact on the pricing. For $30, 000, you can have a 2020 model, but older models can be had for less than $15,000. Although there are more coupes available than roadsters, there are more 350Zs on the road than there are roadster coupes.

When it comes to Z vehicles, there are two additional considerations: the cost of upkeep and the potential for resale value. Because of this, the components in sports vehicles are subjected to more abuse and wear and tear than other automobiles. In particular, older 350Z cars that have had multiple owners and have accumulated considerable miles are at risk.

For both 350Z and 370Z, call your local Nissan dealership or mechanic’s shop and request a breakdown of routine maintenance. If you know what to expect from each car, you’ll be better able to adapt your budget accordingly.

However, there are no guidelines for determining which sports cars will go on to become classics and begin to appreciate in value. A smaller batch size boosts your chances, but it does not assure you of success.

However, mass-produced cars are often undervalued and trashed, which substantially reduces their numbers and makes them more sought for. Consequently,

It’s too early to predict if the 370Z will go down in automotive history as a classic, but the 350Z is on the verge of becoming one. It’s not the rarest of automobiles, but a significant number have been deactivated throughout the years.

Some versions are only $7, 000, so I don’t think the asking costs are going to go any lower.

I think the 350Z is a classic because it has a lot of interesting things going on around it. I believe the coupe will fare better in the long term, but I am positive that manual transmissions will be preferred. Even while the 350Z has various vehicle aid technologies, it lags far behind today’s high-tech sports vehicles.

The 370Z is an improvement over the 350Z in a number of areas that were lacking on the older model. The 370Z is faster, has more power, and is lighter than the 350Z.

The improved suspension system on the 350Z should help it handle better, and with a few tweaks, it should be able to equal the power of a 370Z.

155 mph is the electronically regulated top speed of both Z vehicles. The extra power the 370Z generates when the electronic limiter is disabled allows it to reach a higher peak speed.

The more recent 370Z models are excellent choices for those who want a reliable sports car they can use every week. But if money is limited, the choice between the 350Z and an older 370Z model comes down to personal taste and maintenance expenses.

Although the 350Z has the potential to be a classic sports vehicle, the decision is ultimately up to you.

Top 7 Brake Locks
Do Jeep Wrangler Lifespan Long?
Are You Allowed To Have Tinted Windshield And Windows In Florida?
Can You Add Water Instead Of Coolant