High viscosity index of 5W50 engine oils (near to 200) suggests the oil is particularly stable under high loads. Because of their high price, these lubricants are rarely widely used, but they are essential for high-performance engines and are dubbed “sports oils.” In every instance, they are depicted in the form of synthetics.

Synthetic lubricants predominate in 5W40 oils, which have a slightly lower viscosity. 50w50 is more stable at high temperatures and loads because of its higher high-temperature index than the other two oils. Because the oils have the same low-temperature index, they will perform similarly when given a cold start.

We can use the typical values of kinematic viscosity at 100 °C (212 °F) to compare the differences between the oils. 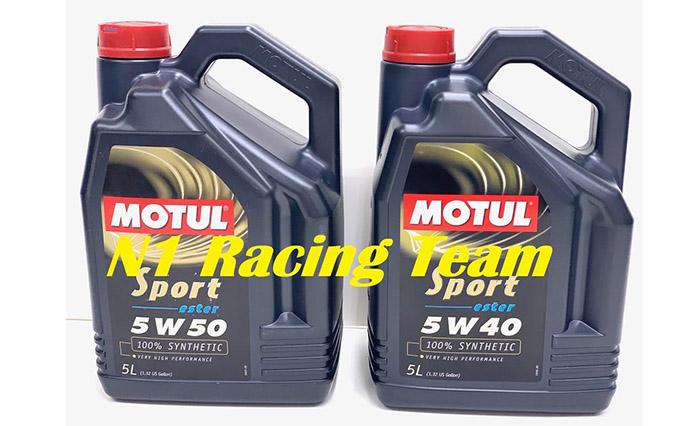 As an example, I’ll use the findings of laboratory tests on Motul 5W 50 and Motul 5W 40 oils to demonstrate the differences between the two.

Even at operational temperatures, the viscosity is substantially higher, indicating that it will make a highly robust film suitable for harsh conditions, as seen clearly in the table. In addition, the flash point has been enhanced and the overload stability has been improved.

As for starting in cold weather, the difference isn’t going to be significant; it all comes down to the manufacturer and composition. Because of the modest levels of esters in this particular 5W50 oil, turning the crankshaft on a cold one will be much easier.

When should 5w50 be used in an engine? Since 5W50 has a greater viscosity and thicker oil coating to protect the engine, it is an excellent choice for a high-mileage vehicle because tolerances are consistent.

Oil will burn off the cylinder walls if it is too thick for the engine. There is a risk of overheating and coking rings as a result of a thick oil film preventing heat transfer. Keep in mind that an increase in viscosity means a rise in energy consumption as well as an increase in the amount of fuel consumed.

According to the circumstances. 5W40 is an excellent choice for normal driving in ordinary engines. A 50W50 synthetic motor oil is recommended for performance driving. However, we always follow the advice of the engine maker. It’s never a good idea to take a risk like increasing viscosity, so think it over thoroughly first. Understanding why you need to raise the viscosity will make it clear which method is best for you.

In this case, Motul 50ka oils will be marginally better, but not much better than other oils. With most oils, this is a fact. In cold start, there will be no noticeable difference between the two oils. In terms of performance, the two are very different at high temperatures and load.

It is feasible to combine motor oils, but only under very specific circumstances and with oil from the same manufacturer. The viscosity of the oil will either decrease or increase depending on the amount of additional oil.

You get an average of 5W 45 by combining the two viscosities 50/50, as shown in the table. Synthetic, semi-synthetic, or mineral oils are also taken into consideration.

Because the 5w50 oil has a higher viscosity, it is thicker and better able to withstand high loads. In addition, it is more resistant to shear, which means that the engine oil will not thin out as quickly as a lighter weight oil at high temperatures or under heavy loads.

What’s An Aftermarket Tow Package?
How To Remove Stains From Plastic Dashboard
3 Ways On How To Check How Much Gas You Have With A Broken Fuel Gauge
Car Leaking Antifreeze When Parked