If you’ve ever been inside a parked car with the windows rolled up, you know how quickly it can get hot and stuffy inside when everything is locked up.

When the windows are closed, the doors are locked, and there are a few people in the car, the air quality may become more than just uncomfortable.

How long can you stay in a car before you start to get short of breath? Do cars even keep out air?

Cars don’t keep out the air. If you roll up the windows of an average-sized car, the amount of oxygen that can flow through the car is enough for up to 10 people to breathe before they start to feel the effects of low oxygen.

Most cars will change the air in the car every one to three hours, so you can’t suffocate.

This is what a study by J.H. Park and other environmental health researchers at Harvard University found.

It’s important to know that older cars have a higher air exchange rate than newer ones.

Read on for some important tips about what you need to know if you have to sleep in your car. 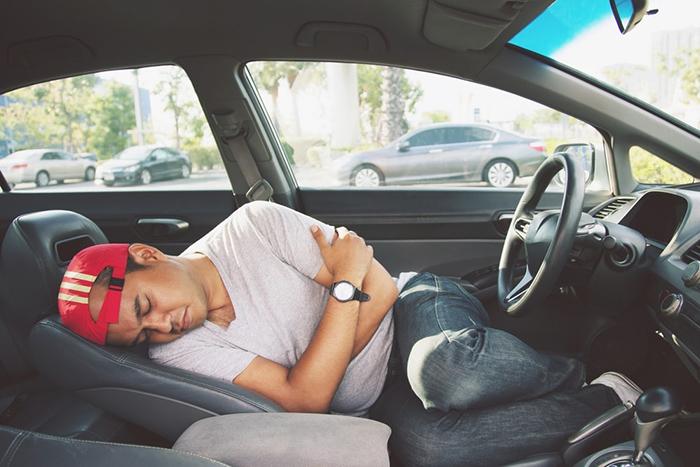 No, cars are not airtight because their parts and structure are made so that fresh air can get in.

Even if all the windows are closed, you are not likely to suffocate in a car because air can move through it.

There are some signs that a car is not airtight:

If the car didn’t let any air in, it would be hard to close the doors or windows. This is because the air pressure inside and outside the vehicle would be different.

If an airtight vehicle fell into water, the difference in air pressure would also make it float.

If the windows were closed and the car was airtight, people wouldn’t be able to drive for long distances because they would probably suffocate.

More things show that a car is not airtight, but it’s important to remember that oxygen can get in even when the doors and windows are closed.

In addition, there are vents in the cars that let air from the outside come in.

Air can also get in through the car’s windows and door seals. They are only closed so that water doesn’t get into the car.

A car can’t be airtight because it gives off harmful gases, like carbon monoxide, that could get into the car and make you suffocate.

Is It Safe to Sleep in a Car?

When deciding whether or not to sleep in your car, there are many things to think about.

Carbon monoxide, a poisonous gas that your car gives off, can kill you if you breathe it in for a long time.

It takes the place of oxygen in the red blood cells, which changes how the body works.

CO is very dangerous because it can go undetected for a long time because it has no smell, no colour, and no taste.

This is normal for a lot of cars, but depending on other things, your car could get even hotter.

One example would be a car that gets too hot because parts in the engine are broken.

Sleeping in the car is dangerous, especially for pets and kids who can’t say they are uncomfortable.

If the right steps aren’t taken, they can easily get heat stroke and become dehydrated.

On a hot day, don’t sleep in your car because it might get too hot.

If you park your car on asphalt, it could get hotter because asphalt soaks up a lot of heat.

On a hot day, it’s better to park under some shade.

If the inside of your car is wet, the temperature inside could be lower than 400 F.

Frostbite and hypothermia can happen because of these low temperatures.

Most of the time, air will condense when there is a big difference in temperature between the outside and inside of your car.

Drops of water will stick to your clothes, making you feel even colder.

There are a lot of risks when you sleep in a car, from criminals to wild animals.

Make sure there are no valuable things out in the open.

Keep your food in airtight containers or outside in a tree if you are in bear country.

Keep your doors locked and your windows only half open to keep thieves out of your car.

Park your car where there are other people and it is well-lit. Don’t spend the night alone in the woods.

Do You Need to Crack a Window to Sleep in a Car?

Sometimes opening a window doesn’t help because the car might already be too hot.

The CO buildup in the car could also make it take a while for the fumes to go away.

If it’s damp in the car, you should open a window.

But what if it rains or it’s late at night?

Can You Run Out of Air Sleeping in a Car?

When you sleep in a car, you won’t run out of air, but there are other, more dangerous things to worry about.

Because you can’t smell it, carbon monoxide poisoning should be your number one worry.

You can sleep in your car, but to stay safe, you must do the following:

1. Use the Fresh Air Setting on the A/C

If you can’t leave your car windows open for safety reasons, the next best thing to do is turn on “fresh” or “new” air.

You might have “recirculate” turned on, but it doesn’t help much with fumes in the car.

2. Check Where You Are Parking

Make sure you can park where you want to park. It’s a lot safer because they probably have security cameras to keep an eye on things.

This will make it harder for people to break into your car.

You should also park in a place with a lot of space and good air flow.

Do not sleep in a garage or a place with little air flow because the fumes from your car will linger and make you sick.

Don’t sleep with the engine running, especially if you’re in a place that doesn’t get much air flow.

Don’t park your car next to other cars, whether they are running or not.

If they give off fumes, they could get into your car while you’re sleeping.

3. Do Frequent Mechanical Checks on Your Car

Maintenance checks should be done often to avoid problems like tailpipe leaks, holes in the car’s body, broken A/C, etc.

If you want to sleep in your car, these are just some of the things you might need to fix.

If you plan to sleep in your car often, a CO detector will give you peace of mind that there are no toxins in the air while you sleep.

The detector will sound an alarm if any CO gets in the vehicle, keeping you safe at all times.