If you want to buy a Hyundai Elantra but live in an area that gets snow, you might be wondering how well this sedan does in the winter.

Because it has ABS, stability control, and traction control, the Hyundai Elantra does pretty well in snow. Even though it doesn’t come with all-wheel or four-wheel drive, you can add snow tyres to make it even better for winter driving.

So, let’s take a closer look at the parts of the Hyundai Elantra that make it a good vehicle for the snow.

Is the Hyundai Elantra a Good Car for Snow? 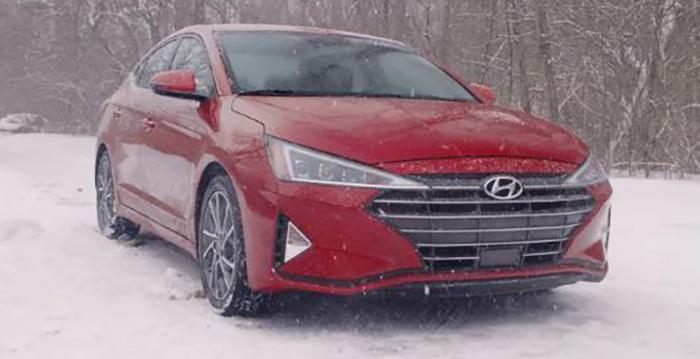 If you’re driving a Hyundai Elantra, winter weather won’t slow you down too much. But if you put the right tyres on it, it will work even better.

The Elantra has a number of systems that help keep the car stable.

The anti-lock braking system makes the car better in the winter. You don’t have to worry that your brakes will lock up when you put pressure on them. Not even ice will be able to make that happen.

The Elantra also has an electronic brake distribution system that was made by Hyundai. Not every tyre on your car carries the same amount of weight when you drive. So, the EBD system will change the amount of pressure that is put on them.

Both of these technologies help keep you from losing control of your car when you hit the brakes.

The remote start system would be another good thing to have in the winter. No one likes sitting in a cold car. With this, you can warm up the car while you are still inside. When you get there, it will already be warm.

A new stability control system also makes things work better in bad weather. It will know when you’re no longer in charge. Then, it will change the brake pressure and engine speed to get the car back to where it should be on the road.

That makes it much easier for drivers to stop sliding and get back in control.

A new system called traction control also helps you stay on the road.

By adjusting the power to the tyres, you can stop the wheels from spinning when they don’t need to. A patch of black ice won’t even have a chance.

As soon as you start to lose control, it will figure out how much power to send to each wheel.

If one of your wheels is turning faster than the others, the traction control system will send less power to that wheel.

The High-Beam Assist would be another good thing about the Hyundai Elantra. This will keep your high beams from blinding people coming the other way.

You’ll also have a lane departure assist. It will tell you if you are going outside the lines. If you keep drifting, the steering assist will push you back to the middle.

A blind-spot assist device also lets you know when someone is in the area you can’t see. Even if you try to merge, it will put the brakes on one of your wheels. That keeps people from running into each other.

There’s even a feature that helps prevent rear-end collisions. This one can tell if you’re backing up and there’s traffic coming the other way. The car will stop if something gets in the way. You won’t run into anything that way.

Some Hyundais even come with a heater for the engine block. This part, however, depends on the market.

You can keep the engine warm by plugging your Elantra into a regular outlet.

A battery booster might also help you drive better in the winter. This gives your battery more power if it dies because of the cold.

Does the Hyundai Elantra Come With AWD?

The Hyundai Elantra does not have all-wheel drive or four-wheel drive. It’s a car with front-wheel drive. None of the trim choices add any other ways to drive.

That doesn’t mean, though, that the Elantra can’t handle winter. This sedan should still be able to handle a lot of snow.

You should be extra careful when driving on ice. Since only two wheels have power, it’s easy to lose grip.

If you’re driving on ice, go slowly. The traction control system should stop you from completely losing control. But you’ll have to go a lot farther to slow down.

You’ll also notice that you can’t move as quickly on ice.

How Much Snow Can the Elantra Handle? 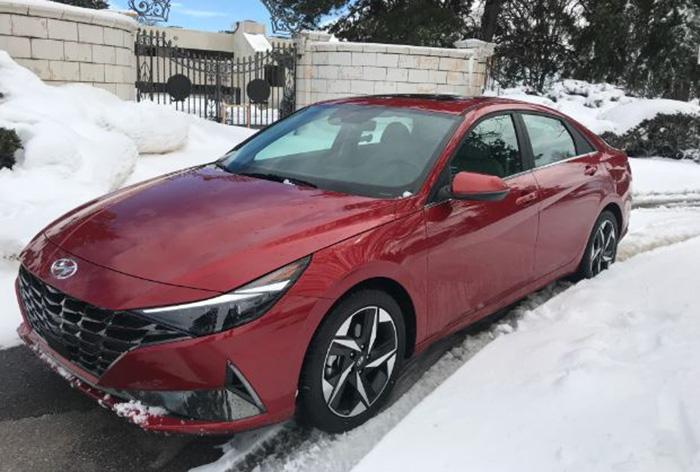 The height of the Elantra is 5.3 inches. That is more than enough to drive on most winter roads. You shouldn’t have any trouble in the snow unless the roads aren’t cleared.

We don’t think you should drive through snow that is more than 4 inches deep.

You could still drive through deeper snow if you had big snow tyres.

You might find that the cold weather causes other problems. For example, it might seem like your battery dies faster than usual. Batteries don’t hold their charge as well when it’s cold.

Also, you should check the air in your tyres. If it was cold, they might not inflate enough. The system that checks the tyre pressure should tell you. But before going for a drive, you might want to check.

Also, your windshield wipers could freeze. If it’s snowing, wipers that are frozen won’t help much. Most likely, they’ll just stay where they are.

Keep your engine’s antifreeze tank full. If not, you could have problems with fluids freezing inside it.

Putting snow tyres on your Elantra is the best thing you could do for it. These give you better traction in the snow. And they’ll raise your car a little bit off the ground.

Snow tyres are made of a special kind of rubber that is more flexible in cold weather. For traction, you need to be able to bend. So, they will grip the snow a little better.

You’ll also notice that you can stop better when you have snow tyres on. Since they have better grip, it will take them less time to slow down.

They’ll even help you get going on roads that are slick. When traction is better, wheels are less likely to slip.

You might want to bring along a tyre inflator. Because tyres lose air pressure in the cold, you never know when you’ll need one.

If your spark plugs are getting old, you should get new ones. When it’s cold, old spark plugs tend to fail more often. You won’t be able to start the engine without good spark plugs.

The Hyundai Elantra Is Suitable for the Snow

Don’t let the snow stop you from getting one if you’ve been thinking about it. There are many safety features in the Hyundai Elantra to keep you safe on the road.

Just don’t drive in snow that’s more than 4 inches deep. Snow won’t bother you as long as you do that.