Mustangs are a classic American car that are known for being fun to drive. You might wonder, though, how that driving experience would work in the snow and if Mustangs are good in the snow.

Mustangs don’t do well in snow and ice because they have rear-wheel drive (RWD) and low ground clearance. Adding snow tyres or chains is one way to improve their performance in snowy weather.

Even if it’s snowing, you should still be able to drive them as long as you’re careful. Usually, you don’t want to drive something with rear-wheel drive (RWD) in the snow.

If you tried to take one of them on a snowy road, you might fishtail. Most of the weight of the Mustang is not on the back axle.

That means your back tyres don’t have a lot of force pushing them down.

The fact that Mustangs are so low to the ground is another reason why snow can be hard for them. They might not be able to get over just a few inches.

If there has been a lot of snow, you shouldn’t take one out.

If you are skilled, you can still drive a Mustang in the snow. If you use the right methods, you shouldn’t have any problems.

When you order the car, you can also ask the dealer to put in some safety features. A lot of changes have been made to help cars handle better in the snow.

What Features Does the Mustang Have for Snowy Roads? 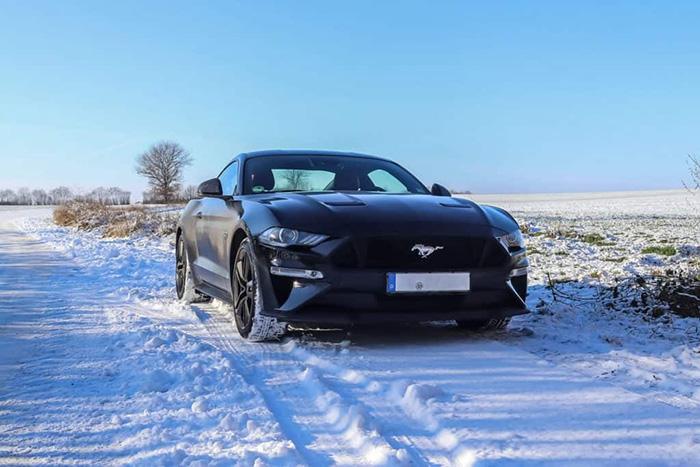 When you order a Mustang, make sure you tell the dealer to add all possible safety features. They will make driving much safer when it’s snowing.

Most Mustangs already have traction control as a standard feature. When they move, their TCS technology keeps an eye on all 4 wheels.

If one of them loses grip, your car will adjust itself automatically.

The sensors in the TCS are activated when a wheel starts to slip. It will put the brakes on any slipping tyre to stop it from spinning.

Your TCS system can also use the car’s engine to slow it down.

Electronic stability control is another helpful piece of technology.

This is in most Mustangs and works a lot like TCS. It keeps an eye on how you drive to see if your car is stable.

It compares how fast you’re going to how you’re turning the wheel. They’ve even made them so that speed is taken into account.

If the system thinks you’re unstable, it puts the brakes on. It will also give the engine less power, which will slow down your car.

Antilock brakes also help the Mustang do better in the snow. If you try to put too much pressure on the brakes, the wheels can lock up.

If it weren’t for the antilock system, you would start to skid.

The anti-lock brakes on the Mustang also have a redistributive system.

You will also have an electronic helper for the brakes. On ice, it takes longer than usual to stop a car. If you don’t press hard enough, this system will do it for you.

So, your car will really slow down and stop.

How to Prepare Your Mustang for the Snow

There are a lot of things that help the Mustang drive in the snow. But you can also do your own things to get ready for snow.

If you do that, it should be easier to get out of the snow if you get stuck.

We would suggest that you get some tyre chains and put them in the trunk. If a blizzard comes out of nowhere, you can wrap them around your tyres.

To be even more ready, you can also put a battery charger in the trunk. When it gets cold, a lot of drivers say their batteries are dead.

That’s because batteries lose power faster when it’s below a certain temperature.

If the car’s battery dies, you could jump-start it with a battery charger. So, you won’t have to wait around for someone to help you.

Just connect the charger to the battery on your own. Then you can quickly get back on the road.

Driving a Mustang on Ice 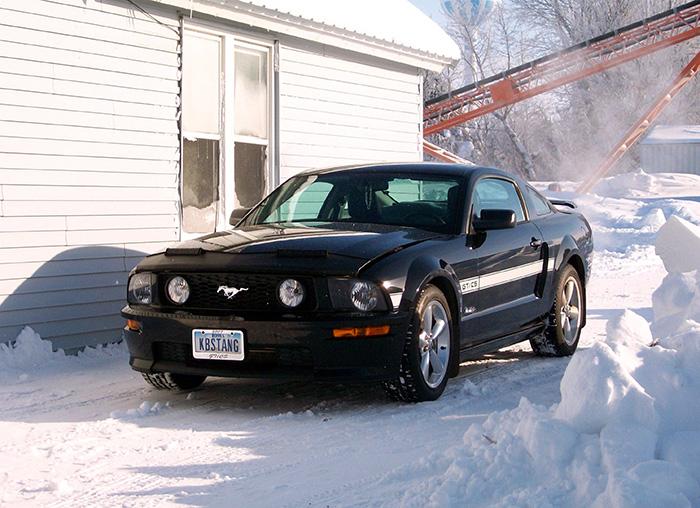 How well does the Mustang handle when the road is icy? Icy roads are like snowy ones, but they are a little different to drive on.

The most important thing to keep in mind is how long it takes to stop.

If you’re on ice, you’ll need to start to slow down a lot sooner. If not, you won’t be able to stop in time.

If you’re on ice, it will be hard to get your Mustang moving again after stopping. Because most of its weight isn’t on top of the rear axle.

So, when you stop, it’s hard for the tyres to hold on to the road.

Putting more weight in the back of your car can help it grip the road better. You should also make sure to use the safety features of the car.

They’ll make it harder for you to lose control.

Is the Mustang an AWD Vehicle?

When there’s snow on the road, everyone knows that it’s safer to drive an all-wheel-drive car. They have better grip when the road isn’t in good shape.

The Mustang doesn’t have all-wheel drive, which is too bad. All of their models have transmissions that send power to the back wheels. So, it’s hard to drive them when the roads are wet.

To keep from losing control, you’ll have to drive carefully. If you go too fast, you might lose your grip on the road.

So, if the weather isn’t great, try to be kind.

Should You Put Snow Tires on Your Mustang?

Getting snow tyres is one of the best things you can do in the winter. They have changed them so that they grip the road better when there is snow on it.

You should get snow tyres for your Mustang if you want to drive it in the snow. When it’s snowing, they’ll make a big difference in how well the car drives.

Snow tyres have treads that are wider than those on all-season tyres. This helps them pack down the snow as you drive, which gives them better grip. It doesn’t take long to put snow tyres on your Mustang either.

If you put snow tyres on your car, it won’t take as long to stop. Also, it starts moving smoothly again after you stop.

This is because snow tyres are much better at holding on to snow than other tyres.

How Does the Mustang Handle Freezing Temperatures?

Ford’s Mustangs used to all have carburetors. When it got below freezing, these didn’t work very well.

Carburetors only work at the right temperature, so cold weather can stop them from doing their job.

But this problem doesn’t happen with new models.

Ford changed all of its cars so that they all use electronic fuel injection systems. If you have one like this, it will work well in cold weather.

If an old model has a carburetor, it might not start when it’s cold. It shouldn’t be a problem if yours has an electronic fuel injection system.

Ford’s first car with electronic fuel injection was the Mustang GT, which came out in 1986. Since then, all of their new models come with it.

BMW 328i Oil Type
How To Remove Swirls From Black Paint
How Much Is The New Harley-Davidson Bicycle?
Jeep Wrangler Oil Filter Housing Recall