It’s fun to drive when it’s warm outside, but not when there’s snow on the road.

Even though many cars are known to be good in bad weather, you might be wondering how Tesla and other electric cars compare. In a snowstorm, the last thing you want is to have to get your Tesla towed.

Here’s what you need to know to figure out if your Tesla will be good in the snow.

In the snow, Teslas are very safe and have great performance. With their high-tech electronics and advanced traction control systems, electric cars like the Tesla of today do much better in bad weather than the first electric cars.

In fact, many experts and car fans will say that the increased torque that Teslas and other electric vehicles offer makes them even better in snow than traditional combustion engines.

That’s just one way that Tesla has made sure their customers are happy.

Read on to find out more about how to drive your Tesla in the snow.

What  Makes Teslas So Good In The Snow? 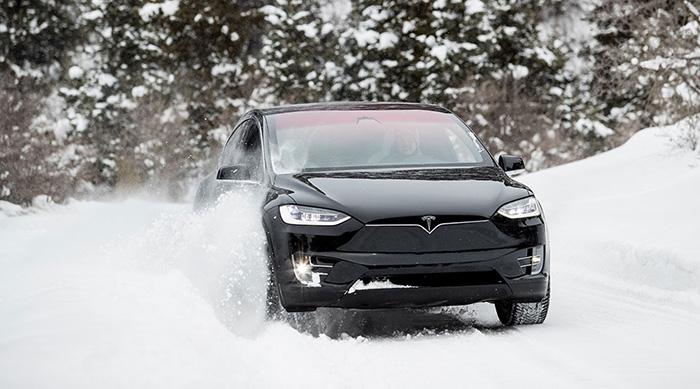 Many drivers are surprised to learn that the Tesla battery pack is a big part of how the car handles in the snow.

Because of where the battery pack is in the car, the centre of gravity is very low. This makes the Tesla stable on the road even when the pavement is wet.

Most experts agree that if you live in an area with harsh winters, an AWD Tesla will be the best car to drive in the snow.

Your Tesla can give you the best grip you need to stay safe by using all four wheels at different speeds.

In fact, most of the time, an AWD Tesla will do much better than a RWD Tesla.

But this is not something that only happens with electric cars. Gas-powered RWD cars have been known for a long time to perform worse in the winter.

If you have a vehicle with rear-wheel drive, it’s much easier to lose grip on snow or ice and have your tyres spin.

The answer to the age-old question of whether an AWD Tesla will perform better than a 4WD regular car is as mixed as the weather you’re driving in during the winter.

First, a 4WD vehicle will almost always do better in deep snow because it is designed to have a higher ground clearance, a higher profile, and to work independently of traction control.

The main difference between AWD and 4WD is that 4WD is only on when needed, while AWD is always ready to go.

Because of this, AWD systems can quickly adjust to changes in the road, which puts less stress on your car.

So, 4WD is better in deep snow, but an AWD Tesla will do better on ice or roads that have light snow on them.

Do Electric Vehicles Handle Better in the Snow?

As you just read, a Tesla with all-wheel drive will do well in the snow. But in general, electric cars are thought to be both good and bad in the snow.

Most of the time, performance will depend on how the car is built and what model it is.

Early models of electric cars were hard to drive in the winter, but many changes have been made, especially to Tesla cars.

For example, early electric cars were almost completely controlled by computers, which made it hard to drive them on wet roads.

But as traction systems have gotten better and battery packs have been moved to make the centre of gravity low, winter driving has gotten a lot better.

The regenerative braking system is the one thing that most new Tesla drivers have trouble with when they first try to drive in snow or ice.

This means that a Tesla will automatically slow down, which can make the car slide out of control when you least expect it.

Luckily, this problem doesn’t happen very often. Since the traction control system has been improved, the regenerative braking stops automatically when the temperature outside drops below a certain point.

This makes it much less likely that you will suddenly slip while driving, making you much safer on snowy or icy roads.

Even though you can’t turn off regenerative braking on your Tesla, there are some things you can do to help keep from losing traction.

If the car doesn’t automatically slow down when you hit the brakes, you can let off the gas more than you normally would.

This way, you can slow down at your own pace, and the car won’t have to use all of its brakes at once.

You may be able to turn down the regenerative braking on some Tesla models. To do so, check under “Driving Settings.” 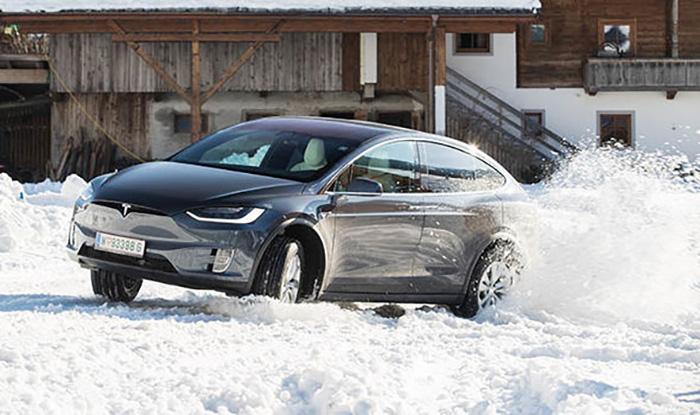 Not all Tesla models do the same well in the snow, though.

If you live in an area with a lot of snow and ice, choose a Tesla model that gets good reviews for winter driving.

Most of the time, this is the Tesla Model 3.

The Model 3 just barely beats out the Tesla Model S. This is because it comes standard with all-wheel drive, which means you’ll always have plenty of grip on that slippery road.

Also, the Model 3’s batteries are low to the ground and under the floor, which gives it a very low centre of gravity.

But the batteries are pretty much in the same place in all Tesla models.

The Tesla Model 3 is different from other cars because, in addition to having standard AWD, it has a low profile. This helps a lot if you lose traction and need to keep control of the car.

If you don’t want the Model 3, the Model S, which is very popular, is almost as good in the winter.

AWD is not standard on the Model S, but it can be added as an option.

In the electric vehicle market, the Model S is often called the “perfect snow sedan.” However, it is heavier than the Model 3, which is strange since both cars are about the same size.

If you choose a Model S, keep in mind that it’s heavier than a Model 3, so you’ll need to plan for longer stopping distances when you brake or slow down. This is important to remember to avoid getting into an accident.

When you buy a Tesla, some of the best features will be ones that help you drive safely in the winter.

Some of the most important things to know are how to charge your car’s battery and how cold weather can affect your battery’s winter range and performance, which can be important if you don’t want to be stuck on the side of the road in the middle of winter.

First, look on your Tesla’s screen for the Snowflake icon.

This means that the battery is too cold to use all of the energy it has stored. This can limit your vehicle’s range, power, and regenerative braking in the winter.

But once your battery is warm, the Snowflake icons go away, which means your car should be running at its best.

If your car needs to be charged, you should do it in the winter at a Tesla Supercharger station.

Not only is it faster, but your battery will heat up faster as well.

Also, keep your Tesla plugged in when you’re not using it. This helps keep the heat in your car by using the charging system instead of the battery.

If snow and ice are in the forecast, you can do things to keep your mirrors and windshield from freezing.

First, move the wipers and mirrors on your Tesla by putting the wipers in the service position and turning off the auto-fold feature on the mirrors.

Also, don’t forget to use the Defrost feature of the Tesla app to remove snow and ice from your car.

To keep your charge port from getting frozen, you can turn on Preconditioning on HI or use the Defrost feature in the app. Also, make sure the cameras and sensors for your Tesla’s autopilot are free of snow, ice, and dirt.

Lastly, if you live in an area where the roads are snowy or icy for most of the winter, you should get winter tyres for your Tesla.

You can do this by going to a Tesla Service Center or buying tyres from the Tesla Store online.

If you’ve ever driven a traditional gas-powered car in very cold weather, your battery has probably died at some point.

Since this happened, you might worry that the same thing could happen to your Tesla.

But that’s a common mistaken belief about electric cars, and it’s not likely to happen to your Tesla.

If anything, the cold will make it more likely that you’ll lose some of your car’s range.

This doesn’t happen because cold weather is bad for your car’s battery. Instead, it happens because the battery has to work harder in cold weather to power other parts of the car.

Several studies have been done on this subject to find out how much range you might lose.

In extremely cold weather, your Tesla may lose up to 20% of its normal range.

But Tesla has made a lot of improvements to its batteries and charging systems, so most Tesla drivers say that the range of their cars doesn’t change much when it’s cold outside.

If you want to know how your Tesla compares to other electric cars in cold weather, studies have shown that some electric cars can lose as much as 50 percent of their normal range when driven in extreme cold.

Careful Planning is the Key to Success

When winter comes and you head out in your Tesla, you’ll always do best if you plan ahead.

For example, if you remember that your car’s heater will use a lot of power, you’ll know that this could affect your regenerative braking and range.

Also, you can use Track Mode to get unstuck if you get stuck in the snow and can’t get traction under normal driving conditions.

Even though Tesla says not to do it, this is a quick way to get back on the road.

With Track Mode, you can spin your tyres to get going faster. But if this works, you should always turn on your Tesla’s traction control system right away before driving on the highway.

Now that you know a lot more about how your Tesla will handle snow, you’ll have one less thing to worry about on a cold winter night when you’re driving.

Your Tesla will keep you safe on snow- and ice-covered roads, whether you use Track Mode to get out of a snowbank or learn how much range your car will have in cold weather, among other important things.