There’s nothing more liberating than going for a drive on an open road on a bright, sunny day, which happens a lot in Arizona.

Did you know that some of the sunniest cities in the world are in the state of Arizona?

Even though life on Earth needs a certain amount of sunshine, Arizona’s sun and high temperatures can sometimes be dangerous to human health.

The hottest month in the state is July, when the average daily temperature is 107 degrees Fahrenheit.

Arizona has almost constant sunshine and very hot temperatures, which are bad for cars. Tinting your car windows is not just a fashion statement in Arizona.

In one of the hottest and sunniest places on Earth, you need to know all you can about Arizona window tint laws. We have the answers to your questions, including this one: can you get pulled over for window tint in Arizona? 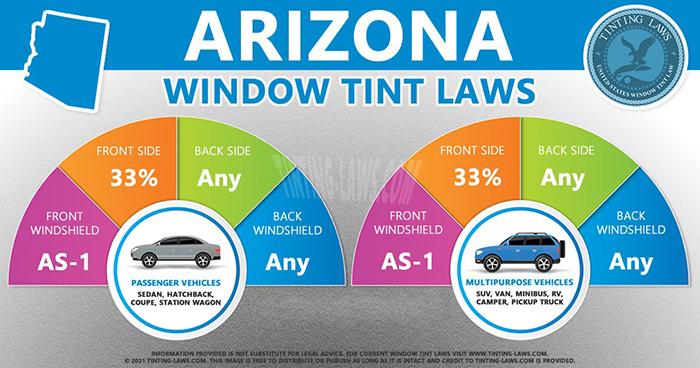 Some of Arizona’s laws about window tint are unique to the state, and if you don’t follow them, you could get pulled over for tint in Arizona.

Visible Light Transmission, or VLT, is the amount of natural light that gets through the tinted film on your car’s windows. Like other states, Arizona bases its window tinting laws on VLT.

Laws about window tinting in Arizona apply to passenger cars (like compact cars and sedans) and vehicles with more than one use (like SUVs or trucks).

If you don’t follow Arizona’s laws about window tint, you could get pulled over.

And the result could be a ticket that costs a lot of money.

You can put non-reflective film on the front windshield of a passenger vehicle, but it must be above the AS-1 line.

According to VLT standards, the front-seat side windows can be tinted up to 33 percent darkness. This means that 33 percent of natural light can pass through.

Arizona law says that the back seat side windows can have any percentage of tint darkness.

In Arizona, the back windows of passenger cars can be tinted to any level of darkness.

In Arizona, a non-reflective film can be used to tint the front windshield of a multi-purpose vehicle.

But the tint must be above the AS-1 line set by the vehicle manufacturer.

According to VLT standards, the front-seat side windows can be tinted up to 33 percent darkness. This means that 33 percent of natural light can pass through.

Arizona law says that the back seat side windows can have any percentage of tint darkness.

In Arizona, the back windows of multipurpose vehicles can be tinted to any level of darkness.

“Reflective tinting” is a new way to tint windows that uses a high-quality tint with a mirror-like finish to block a lot of sunlight.

Reflective window tinting gives the car owner many benefits, including the most privacy during the day (though you can still see inside your car at night).

Reflective tinting also cuts down on glare, protects against UV rays and heat, and makes it less likely that your car’s upholstery will fade.

The laws in Arizona about reflective window tinting are the same for both passenger cars and vehicles with more than one use.

In Arizona, the laws say that the reflective tint on the front side windows and back side windows of all cars in the state can’t be more than 35%.

People with medical conditions that get worse in the sun are encouraged by the state of Arizona to apply for a window tinting exemption.

So, if you’re worried about a real medical condition and you search “can you get pulled over for tint in Arizona,” you don’t need to worry.

Also, these medical exemptions apply to both the car you drive yourself and any other car you usually travel in.

But you’ll need a note from your doctor and only certain skin and other conditions will let you off.

Can You Get Pulled Over for Tint in Arizona?

Getting pulled over by police in your car is never a good thing.

If the officer is worried about the tint on your car windows, you’ll know that it’s best to know the rules ahead of time to avoid this situation.

In 2021, the Arizona State Legislature changed the rules for how window tinting can be done in Arizona.

You can get pulled over for tint in Arizona, but the state’s rules aren’t too strict, and following them is pretty easy.

The laws about window tint in Arizona say the following things.

If the back window of your passenger or multi-purpose vehicle is tinted, you are required by law to have two side mirrors.

In Arizona, coloured window tints are allowed on passenger and multi-purpose vehicles, except for red and amber tints, which are illegal.