The Ford Mustang is a classic American car with a long history, but you may be wondering how family-friendly it is and if it can fit 5 people. This is a very important question to think about, whether you want to buy a Mustang or just rent one to have fun in.

Except for a few high-performance models, the most people that can fit in a Ford Mustang is 4. But if there is a fifth person over the age of 16, they could technically sit on the hump bench between the two back seats without a seatbelt.

The hump bench may not be the most comfortable seat in the house, but it can be used when necessary. But keep in mind that the hump bench does not have a seatbelt because it is not a real seat.

For this to be “legal,” the person would have to be at least 16 years old and able to sit in the back seat without a seat belt.

Even though this rule is true in most of the United States, check your local laws just in case they are different.

If you need to fit five people in your car often or for long trips, it’s best to get a different car for safety and comfort’s sake.

How much room is in the backseat of a Mustang? 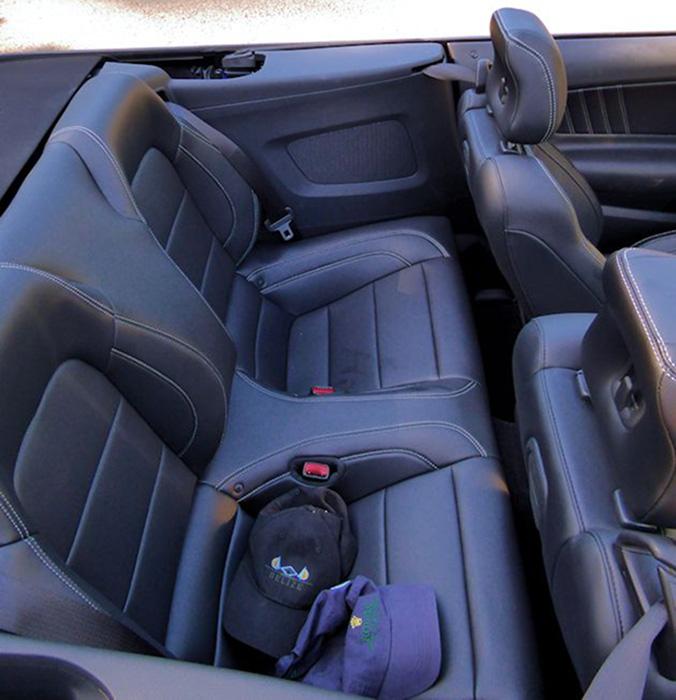 If you put 5 adults of average size in a Mustang, it won’t be a comfortable ride. At least for the people sitting in the back…

Our friends in the front seat can stretch their legs and relax in their bucket seats, but the backseat is a whole different story.

If you don’t know about the Mustang, I should tell you that they are coupés, which means they only have two doors. That means that the people in the back will have to fold the front seats forward and crawl back to get where they need to go.

When you get to the back, there are two official seats with seatbelts and a bench hump between them.

Every model of Mustang is different, and some have bigger humps than others, but most modern ones look like the one below.

Even without a ruler, it’s easy to see that there isn’t much space.

You won’t have much room unless the people sitting in the real seats on either side of you are small. From side to side, you probably won’t have much space around your hips and shoulders to make the ride comfortable.

If you look at how the roof slopes, you can see that there is not a lot of headroom either. People who are shorter will get some relief in this area, but for most people, there won’t be enough headroom.

Ford’s 2020 Mustang lineup says that there is only 34.8 inches of headroom in the back. But that number is taken from the bottom of the seats themselves!

You’ll need to take a few inches off that number to account for the bench’s raised back.

Before you get out of the Mustang convertible, this is where it shines! If you’re going for a ride on a nice day, do the people in the back a favour and put the top down.

This will give them a lot of much-needed breathing room.

Even though it is physically possible to fit five people in a Mustang, it would not be safe. Even though the back seats have some safety features, there is still no fifth seat belt.

There is nothing holding the person in the middle back in case of an accident. This is a very dangerous situation and something that needs to be thought about. Even more so if you’re driving around in a convertible!

Do Mustangs have 4 seats?

Almost every Mustang has four seats. People often call these lineups “2+2” or “2-plus-2” because there are two full-sized seats in the front and two smaller seats in the back.

But it’s also important to note that some high-end performance Mustangs only have two seats in the front. By getting rid of these seats, these “track-ready” vehicles can be made lighter and have more safety features added.

Looking at Ford’s 2020 Mustang lineup, here is a list of how many people each one can officially seat.

The front seats are comfortable bucket seats, but the backseats are much smaller. For adults of average size, the back seats will probably feel tight on long trips.

If you get car sick easily, I should also tell you that the backseat may make you feel uncomfortable because of how closed in it is.

If the weather is nice, rolling down the windows to let in a lot of fresh air can do them a lot of good.

Can I put car seats in the back of a Mustang? 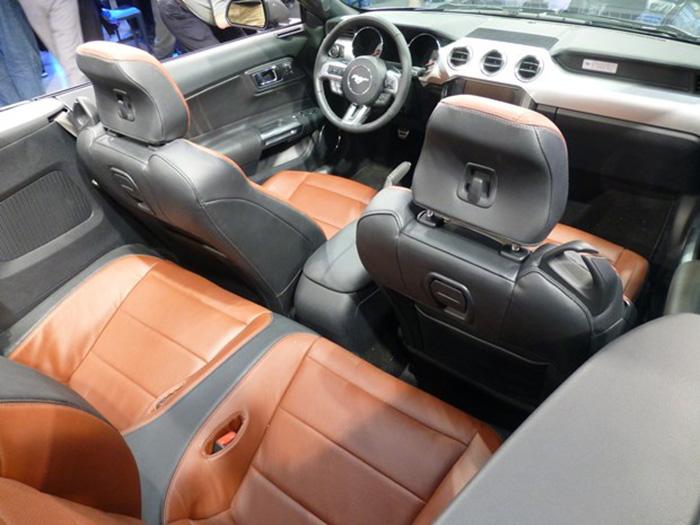 Yes, it is possible to put car seats in the back of a Mustang. In fact, you can put a car seat on each side, so it can hold two car seats.

Please don’t try to put a third car seat in the back, though…

In most cars, the middle seat is the safest place to put a car seat, but Mustangs don’t have that option.

Installation, on the other hand, will take some skill!

Don’t forget that since you don’t have back doors, you’ll have to squeeze past the folded-down seat to connect the car seats. It will be hard to find room to move around and put them in the backseat, but it is definitely possible.

The hardest car seats to put in are those that face backwards, but there are some tricks you can use. If your model has a base that can be taken off, make sure to install that separately first because it is much smaller and easier to move.

You can then click the rest of the car seat into place to keep it safe.

Once your child is big enough for a forward-facing car seat, things will get a lot easier because they usually take up less space. Your child may also be able to get into the back seat on their own, which would save you a lot of trouble.

Just take your time and make sure the car seats are in the right place. When you start to feel frustrated, take a break or ask for help.

Even though the Ford Mustang isn’t the best car for a carpool, it sure is a lot of fun to drive!

You’re sure to enjoy your ride, whether you’re taking the family for a spin on a sunny weekend or just driving around on vacation.

Just be smart about how many people you try to fit in them, knowing that safety and comfort will suffer. When the vehicle is full, keep rides short for the sake of everyone.

Sometimes you have to choose between being useful and having the most fun.

What Are The Requirements For Steering Grease Rack?
Do Cold Air Intakes Increase HP
What Does 20% Tint On Car ?
Cooking Oil in a Gas Tank: What REALLY Happens?!