In this article, we’ll look closely at what ignition coils are, how they work, why they break, and what signs a bad ignition coil shows.

In the ignition system of a car, there is a type of induction coil called a “ignition coil.” Its job is to give the spark plugs the current they need to light the mixture of air and fuel in the combustion chamber. Coil assemblies are an important part of spark-ignition engines and are needed for the engine to work.

The gasoline engine is an internal combustion engine. To work, it needs air, fuel, and a way to start the fuel burning. In engines that use spark plugs to make a spark, the spark is what starts the engine.

The idea behind how ignition coils work is called electromagnetic induction. Induction is the process by which an electromotive force or voltage is created by putting a conductor in a moving or still magnetic field. When it comes to ignition coils, the magnetic field is always in the same place.

Coils are basically step-up transformers that turn low voltages from the car battery into thousands of volts. The car battery doesn’t have enough power to make a spark strong enough to light the air and fuel mixture. Because the compressed air and fuel mix is a good insulator, it needs a high voltage current.

The primary and secondary windings are the two wire coils that make up a typical ignition coil system. As the current flows through the primary winding, it gives the winding energy and creates a magnetic field around the coils. A device that keeps track of time quickly turns on and off the current to build up and break down the magnetic field.

When the current to the primary winding is cut off, the magnetic field collapses. This causes a surge of current in the secondary winding. The current then goes through the gap between the electrodes in the spark plug, making an electrical arc that lights the mixture of air and fuel.

How can you tell if an ignition coil is worn? 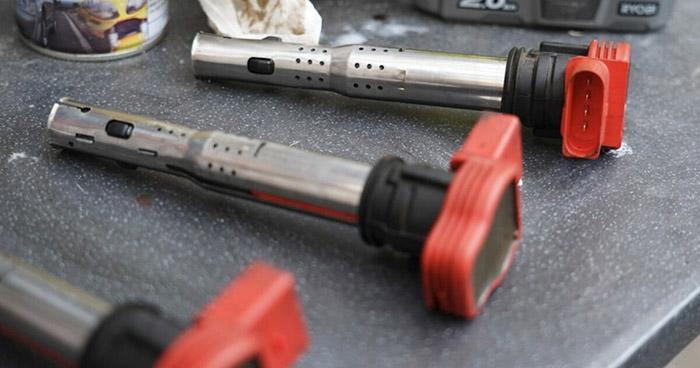 The ignition coils are a very important part of how the engine works. If one of the coils breaks, the engine will stall, misfire, backfire, and have trouble getting started. These problems have a lot to do with the burning process. There are a few ways to tell if your ignition coil is broken, and most of them are easy to spot, as we’ll talk about below.

Worn coils can also cause poor acceleration and a rough idle, which is usually caused by bad sensors, not enough fuel, or worn spark plugs. When the coils on your car are worn, you may notice that the engine is hesitant when you try to speed up, that the throttle response is slow, and that the car idles roughly.

The engine stopping is another sign that the coil is worn. There are many things that can cause a car to stall, such as not enough air, not enough fuel, too much weight, or a failure of combustion. When the coils don’t have enough voltage to make a spark, the engine just shuts off because it can’t make enough power to move the car.

Misfires can be caused by bad coils, just like when an engine stops running. A misfire happens when one or more of the engine’s cylinders can’t get the fuel and air mix right to burn. Misfires are easy to spot because they tend to sputter and work hard. If several cylinders misfire at the same time, the engine could stop working.

Backfires happen outside of the cylinders, while misfires happen inside the combustion chamber. Worm coils could cause one or more of the cylinders to not start up. If the mixture of air and fuel leaves the combustion chamber without being burned, it may catch fire on its own in the exhaust (due to the heat in the exhaust). If your engine backfires, it can do a lot of damage to your exhaust system.

Poor gas mileage is another sign that your coil packs are worn. Incomplete combustion leaves extra fuel unburnt. When the coils don’t send enough current to the spark plugs to make a spark, the fuel’s chemical energy isn’t turned into a form that can be used. When this happens, the amount of fuel used over a certain distance is more than when the coils are working well.

What causes ignition coils to fail? 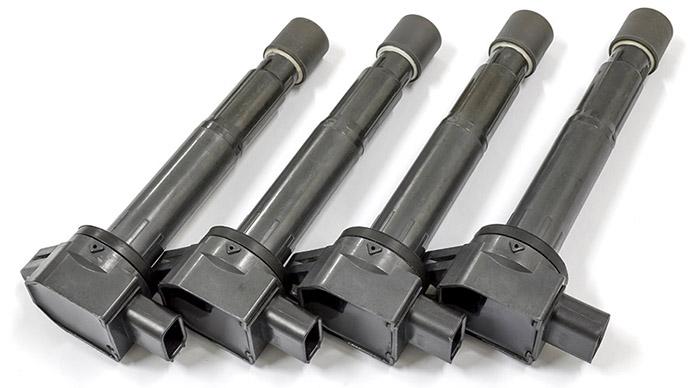 Modern ignition coils are made well and don’t need to be replaced for years. But just because the coils don’t have a service time doesn’t mean they won’t break. Like any other part, coils wear out over time. This is why:

Coils get very hot from the engine because of where they are located. The engine makes a lot of heat, which can put stress on the metal and plastic parts of the coils. When the coil is heated, the metal parts tend to get bigger. When the coil gets hot, it loses some of its ability to change low voltages into high voltages.

When the engine is running, it makes a lot of vibrations. Since the coils are put in the engine block right over the spark plugs, they are shaken very hard. Over time, the shaking causes the connections in the coil assembly to become less tight. Loose connections stop the flow of electricity between the parts of the coil that conduct electricity.

Moisture and dirt are often to blame for wear on the ignition coil. Since the coils are put in the engine, if the seals break, oil and coolant could get into them. Moisture can get into the coils and cause the electrical parts to rust or short out. Broken seals and gaskets can cause leaks that can damage not only the coils but also the whole engine.

For the spark plug to make a spark, the current from the coils must bridge the gap between the plug electrodes. If this gap is bigger than what is recommended, the coils will have to work harder to make a strong enough current to reach across the bigger gap. This puts stress on the parts of the coil and speeds up wear.

In older cars, the coils send electricity to the spark plugs through cables. The normal wear and tear on cables or the high heat inside the engine compartment can damage them. When the cables are worn out, their resistance goes up a lot. If you don’t pay attention, the ignition coil could be destroyed by the increased resistance on the cable.

How do you know when you need new ignition coils?

If you notice any of the signs of bad ignition coils, you should take your car to a qualified mechanic as soon as possible. Early detection of failed coils can stop problems that could lead to expensive repairs in the future.

Because of improvements in manufacturing technology, modern coils are so long-lasting that most manufacturers don’t set maintenance schedules for them. As we’ve already talked about, coils will eventually break down because of normal wear and tear, heat, vibrations, and dirt.

Aside from the usual signs of a bad coil, you can also use an onboard diagnostic (OBD2) scan tool to look for problems. When plugged into your car’s OBD2 port, the tool will look for problems in your car. If it finds a problem, the scanning tool will show a unique code and a brief description of the problem.

When the coils are broken, the “Check Engine” light might not always come on because of the car’s engine management system. Scanning the onboard computer won’t turn up a fault code in this case. If nothing else works, you may have to check the coils by hand for cracks, dirt, and other obvious problems.

How much does it cost to have the ignition coils replaced?

Most coil packs cost between $60 and $200. The price depends on what kind of car you have and what year it was made. Most of the time, an hour of labour costs between $100 and $150. Most of the time, the whole thing takes less than an hour. If you take the car to a dealership, you can expect a big bill and to pay twice as much.

You can replace the coils yourself instead of taking your car to a mechanic if you have a lot of time and don’t mind getting dirty. You can save a lot of money on labour, and you can pick the parts you want to use. It will only take you about an hour to change the coil.

How are ignition coils replaced?

Replacing bad coils is pretty easy and can be done by just about anyone who knows the basics about cars. We’ve written out the general steps below, in case you want to give it a try:

Stop your car and turn the engine off.

Open the hood and, if there are any, take off the engine covers.

Let the engine cool down for a while (to avoid burning yourself).

Find the coils on the engine after the engine has cooled down enough that you can touch it with your bare hands. You can find them easily by following the wires from the coils to the onboard computer. The number of coils could be 4, 6, 8, 10, or 12 depending on your engine.

Take off each coil assembly’s connector. Take note of where the connectors are in relation to the coils. This will help when it comes time to install.

Pull each ignition coil carefully out of its place above the spark plugs. If the coils are held in place by bolts, you will have to take the bolts out to get the coils to move.

After you’ve put the coils in place, connect the connectors back to the coils and make sure each coil is properly connected to its own connector. If you connect a wire to the wrong plug, the firing order could get messed up, which could do a lot of damage to your engine.

Start the car and look to see if the “Check Engine” light is on.

Use an OBD2 scanner to look for fault codes in the computer.

Take your car for a test drive if the “Check Engine” light doesn’t go off and the scanner doesn’t show any error codes.

Check for misfires, stalling, and other problems that could mean the coils are bad. If there aren’t any, good job! You have successfully changed the coils on your car.

Is it OK to drive with a bad ignition coil?

The answer is a clear “NO.” Even if the ignition coils are broken, you can still drive the car, but it’s best to only drive it to the repair shop. Coils that are broken should be changed right away. Driving with bad coils can put you in dangerous situations and could hurt other parts of the car.

Ignition coils are so important that if you don’t have them, your car won’t run at all. Signs of worn coils shouldn’t be ignored, and problems with coils need to be fixed quickly. Ignoring the problem will significantly accelerate wear on other components, and could lead to costly repairs in the future. Whether you decide to take your vehicle to a mechanic for repairs or replace the coils yourself (since the replacement procedure is pretty easy), you’ll need to act fast to prevent further damage.

What Is A Control Arm Bushing ?
Can You Push Start An Automatic Car
Subaru Wrx Maintenance Schedule
Boston To Acadia National Park