Have you ever thought about the most crucial fluid your car requires to run? Gas or diesel would be the first things that come to mind. They are important, however without oil, the engine won’t last long to burn the gas. Engine oil is a key ingredient of a functional engine.

What Is An Oil Pump? 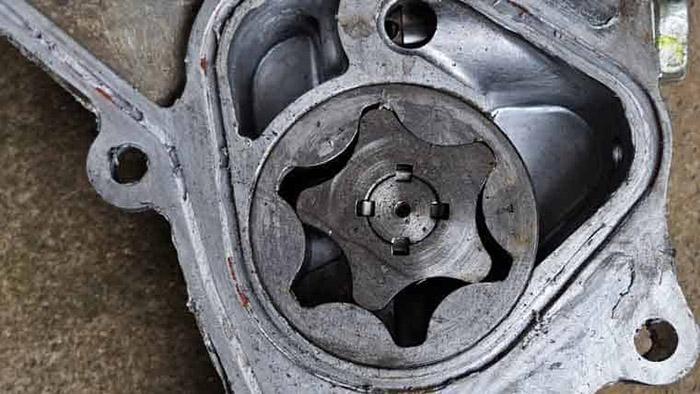 The engine works by burning fuel. The reaction creates energy for the engine to function. While the engine is working, there are many moving parts that brush against each other. Metal on metal contact will definitely destroy the engine.

This is why lubrication is vital. To gain an idea, imagine your joints working without lubrication. What if you could feel your bones grinding against one other each time you move. To make sure your engine gets the same comfort, we utilize engine oil.

How Does It Work

In the past, lubricant was administered manually to the engine. Oil or grease was occasionally used by the user to lubricate the engine. The drip feed system was born out of this initial concept. The oil will be dripped from the top of the engine into the pan as a result of this design. As it flows downward and collects in a tray at the bottom, it will lubricate the engine.

Engine oil is now distributed throughout the engine via a fuel pump. There are several parts to the system. To complete the system, all of them must work together.

Oil is sucked into the pump via the oil pan. This fluid is then circulated around the engine through multiple channels. Using the pump, the oil can be recirculated and returned to its starting location.

There are numerous parts that go into making up the system as a whole. Using the pump, the oil is drained from the pan. Then the oil is filtered. The oil is cleaned by the filter of any dirt or debris.

Sensors are located all throughout the oil pump. Both the amount of oil poured and its pressure are gauged by this device. The onboard computer receives this data. If there is a problem, you will be alerted by this method.

The pressure is kept constant by a pressure valve. Oil pressure is required to complete a full engine cycle, but too much of it can be harmful. Because of this, when the pressure rises, a valve opens to release the pressure.

The oil supply to the engine could be disrupted if one of these components breaks.

Why Do Oil Pumps Fail 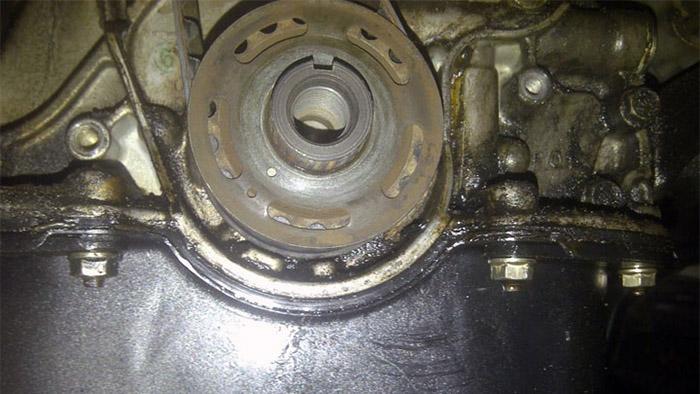 Pumps for oil are large, powerful machines that must be handled with care. They are made to endure a lifetime. However, they are not without flaws. The engine will run dry if the oil pump breaks down. First, let’s look at the causes of a faulty oil pump before discussing its symptoms. There are a few possible causes of oil pump failure.

An oil pump, like anything else, has a use-by date. Oil pumps, like all other engine parts, are subjected to a great deal of stress. As a result, the pump’s components will begin to fail. The pump is damaged by high temperatures and high pressures.

A long and healthy life for your oil pump depends on regular and thorough maintenance. The oil pump is responsible for dispensing all of the engine’s oil. Your pump is doomed to fail if the oil in it is contaminated with dirt and debris.

Every 3000 to 6000 miles, most cars require an oil change. You should have your oil changed on a regular basis if your manufacturer recommends it.

The dirt is dragged away from the engine by the oil, which keeps it clean. The oil takes this up and absorbs it. The oil’s density will fluctuate over time as a result of this. As time passed, it thickened into a sludge. Pumping this oil will cause the sludge to gnaw away at the parts of your pump that are used to pump it. This will cause your pump to fail sooner.

Oil levels can decline if you have leaks. Your engine and oil pump are going to take a beating if you run them on low oil levels.

If there isn’t enough oil to keep the oil pump lubricated, then it won’t be able to function properly. Then you consider the pump’s capacity. A lot of pressure is needed in order to circulate the little oil it possesses. It will have a shorter life expectancy.

There are numerous varieties of engine oils to choose from. The type of engine oil you need depends depend on the make, model, and environment of your vehicle.

Your engine and oil pump will be damaged if you use the wrong viscosity oil. Before you add any oil to your car, be sure you use the correct type.

What Are Bad Oil Pump Symptoms? 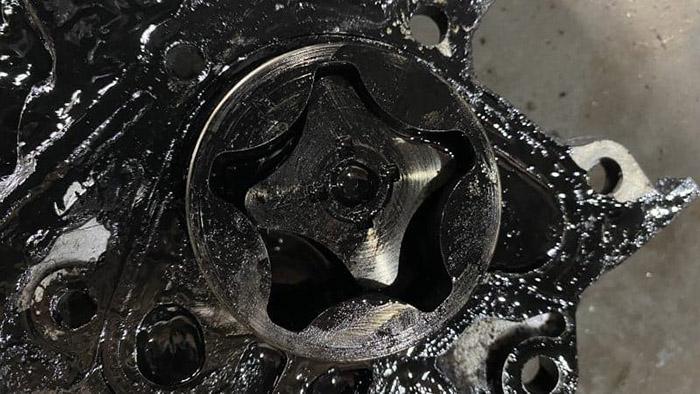 As you may well know, engine oil has various advantages. It is an essential part of the engine’s workings. No matter how much oil you add, if the oil pump does not work, you have wasted your money.

If your oil pump isn’t working properly, how do you know?

Knowing the signs of a failed oil pump is necessary for this. You should be able to recognize an oil pump failure as soon as it occurs if you keep these signs in mind. Your engine will be protected from further damage if your oil pump fails.

When your oil is at least somewhat operating, you won’t experience low oil pressure. As the oil flows through the engine, it does not generate pressure in the oil pump. When the diameter of the oil’s path changes, pressure is generated.

When the oil pump totally fails, low oil pressure results. There will be no pressure readings from the sensors if there is no oil being pumped out of the pump.

A low oil pressure warning light will appear in most cars when this occurs. If your oil level is low and you’re experiencing this problem, the only method to determine if it’s due to a failing oil pump is to add more oil to the engine. Check the dashboard once more for the warning light after you’ve double-checked that your car’s engine oil is sufficient.

There is a possibility that the problem is related to an oil pump, rather than a lack of oil.

A pressure relief valve that is malfunctioning will no longer be able to perform its function on demand. The oil pressure will progressively rise if it is not controlled by a pressure regulator. The check engine light will come on as a result of this.

If this is a serious problem, your check engine light is likely to flicker. This means that you should not continue driving at this point in time.

When it comes to the engine, high oil pressure can be just as bad as low oil pressure. This could impede the flow of oil through the engine. Eventually, you will run out of oil if this happens.

The engine oil regulates the temperature of the engine in three ways.

Lubrication is the most important function of engine oil. This decreases the amount of wear on the engine’s metal parts. However, it also helps to lessen the amount of friction that exists between these parts.

Heat is generated as a result of friction. The engine heats up quickly because of the many parts rubbing against one other. The oil in the engine minimizes heat production by lubricating these parts and so reducing friction.

Consider the fact that motor oil is a liquid as well. A lubricant/coolant mixture is what it is. A portion of the engine’s heat is absorbed by the oil as it passes through the engine. The oil is then returned to the sump after it has been heated.

This is where it rests to let it to cool down so that it can absorb part of the heat generated by the engine again when it laps it again.

Oil also forms a fluid barrier between two metal parts. Metals are excellent heat conductors. This means even if one engine component is heated, the whole thing heats up. The engine oil acts as a barrier to stop heat from transferring from one part to another.

Noises From The Valve Train

You may be wondering what a valve train is and how it works. Engine-related components include this unit. It is located above the engine’s camshaft.

The valve train is made up of pushrods, seals, and guides for the various valves. These are also critical to the engine’s operation. Using these valves, the air can be brought in so that it can be mixed with the fuel and then set on fire.

Hydraulic lifters, pushrods, seals, and other valve train components will wear out prematurely if not properly lubricated. This will eventually lead to a seizure. Metal-on-metal rubbing sounds will be audible before the engine stalls.

Squeaking, grinding, or popping sounds are all signs that your oil pump needs to be checked out.

Noise From The Oil Pump

If you’re wondering if the oil pump produces noise when it’s running, it does. However, this is not a sound that can be heard by everyone. Even if you try, you won’t be able to listen to it.

If you hear noises coming from your oil pump, it’s time to replace it. Wheezing noises should be audible even when the car is at a standstill.

The oil pump is to blame for this. It makes a whining sound as the gears within the oil pump wear down. Replacement of these gears may be possible, but it is better to replace the entire oil pump. Because it doesn’t really matter.

You can’t drive your automobile if you don’t have an oil pump, it’s safe to state. It ensures that the engine’s moving parts are properly lubricated.

Your oil pump may fail for a variety of reasons. The good news is that if you take regular care of your oil pump, you can expect it to last for many years.

As soon as you determine the cause of the oil pump failure, you must consider the expense of a replacement. Depending on the car you drive, the cost of a replacement part can vary dramatically. For an average-sized automobile, you should expect to pay roughly $1000.

That the oil pump only accounts for around a quarter of the $1000 bill and the rest is for labor is a disappointment. However, it is important to note that replacing an oil pump might take up to five hours.

You can save money on labor costs by replacing your oil pump yourself. It’s just that this is one of the most difficult repairs you can do to your automobile.

If you don’t have a lot of experience working on cars, it’s best to leave it to the professionals. If you’re just starting out with DIY, this isn’t the best option.

Does The AC Burn Gas
Where Chevy Silverados Made
What Causes A Key To Get Stuck In The Ignition?
Does Coolant Evaporate In Hot Weather