We all have to deal with that awful situation at some point: you turn the key in the ignition, but nothing happens. It’s not a great situation, but a jump starter makes it easy to deal with.

We suggest getting a starter with an air compressor in case you also have a flat tyre or one that isn’t inflated enough.

The Flylinktech Jump Starter 2500a Peak Portable Car Starter has good ratings and a good name. It comes with a powerful 2500 peak amp starter that can start all gas cars and diesel cars up to 8.0 litres.

Flylinktech says that the starter can jump-start your battery up to 30 times on a single charge and only takes one to three seconds.

The compressor can push out up to 150PSI, and it has a safety valve that turns it off automatically. It comes with adapters for sports balls, inflatables, and air mattresses.

The capacity of the power bank is 24000 milliamp hours, and it has two USB outs, one of which is a quick charge, as well as a DC out that is rated at 12-16 volts. It also has a 5W LED flashlight that can help you start your car when it’s dark.

The box comes with the jump starter/air compressor, smart clamp battery cables, a DC car adapter, a USB to USB-C cable, three-valve adapters for the compressor, and a storage case to hold everything.

Users liked how easy it was to use and how fast it worked.

It takes a long time to charge up at first.

The cables may not be long enough for everyone.

There is no SOS or flash mode.

The Shumacher Rechargeable AGM Jump Starter is a good choice if you want a cheap car jump starter with air compressors that will get the job done. The Schumacher has a peak current of 1000 amps and is rated to start gas vehicles up to 8.0 litres and diesel vehicles up to 6.0 litres.

This car starter weighs 10.95 pounds and has a safety alarm that will go off if the cables are not hooked up right. It also has an LED light built in so you can see what you are doing when it is dark.

The Schumacher has a single USB port and a 12 volt DC charger, so it can also be used as a power bank. The unit’s air compressor is rated for a maximum of 150PSI.

Solar panels can be used to charge.

The internal switch keeps it from getting too charged.

Customer service is fair and easy to work with.

Will need to be charged often

The battery will die soon.

No car charger adapter is included.

The JF.EGWO Jump Starter with 150PSI Air Compressor has a whopping 4000 amps and can start all 12-volt cars, trucks, boats, RVs, snowmobiles, etc., even though it only weighs 2.75 pounds.

JF.EGWO says that the car starter can start a car 70 times without needing to be recharged.

The AVAPOW is a jump starter, but it can also be used as a power bank. It can hold 28000 milliamp hours of power. It also has two USB ports, one of which can charge quickly.

The jump starter has a place to plug in to charge, and it comes with both a 12V DC car adapter and a 100V AC wall adapter.

The jump starter can also be used as a flashlight. It has three modes: light, flash, and S.O.S. If you need to jump-start a car at night, you can use the light mode to help you see. On a full charge, it should work for 120 hours.

This model’s air compressor can fill 35 litres of air per minute at 150 PSI.

There is a display that shows the pressure in real time, so you can see how the inflation is going. The maximum inflation for the compressor is between 10 and 15.

The kit comes with a carrying case, a jump starter/compressor, safety jumper cables, an extension hose for the compressor, four nozzle ends, and two power adapters.

The unit comes with a 12-month warranty from JF.EGWO.

People who used the jump starter said it worked well, was easy to use, and kept them from being stuck with their cars.

Some people may find that cable wires are too short.

Users noticed that the labels for inflation are backwards.

May not start if the battery is totally dead

This unit has 1200 amps, which is enough for gas engines up to 7.0 litres and diesel engines up to 3.5 litres. It also has a safety feature called “INTELLIBOOST 2.0,” which is meant to protect against things like reverse polarity and overheating.

The RUGGED GEEK RG1200 Safety Plus can also be used as a power bank. It has a USB-C input for charging, two standard USB outputs, and a USB-C output. It also has a digital display that shows how much power it has, so you can tell when it needs to be charged.

The jump starter can also be used as a flashlight with 100 lumens and three modes: light, flash, and S.O.S. The unit’s small size makes it easy to hold while you work on your car.

The RGO150 compressor is a 150PSI inflator with three adapters: a needle adaptor for sports balls, a Presta adaptor for bicycle tyres, and a nozzle adaptor for inflatables. It gets its power from the RG1200 itself, so there’s no need to plug it in while it’s being inflated.

In the box, you’ll find the jump starter/compressor, a carrying case, the INTELLIBOOST cables, the RG150 compressor with three adapters, a USB-A to USB-C cable, a USB-C cable, a car charger, and a wall charger.

Users like that the unit is portable and doesn’t have any wires. They also like how long it lasts.

If you touch the light switch, it might turn on.

Compressor adapters made of plastic can get hot

It can be hard to charge a battery pack. 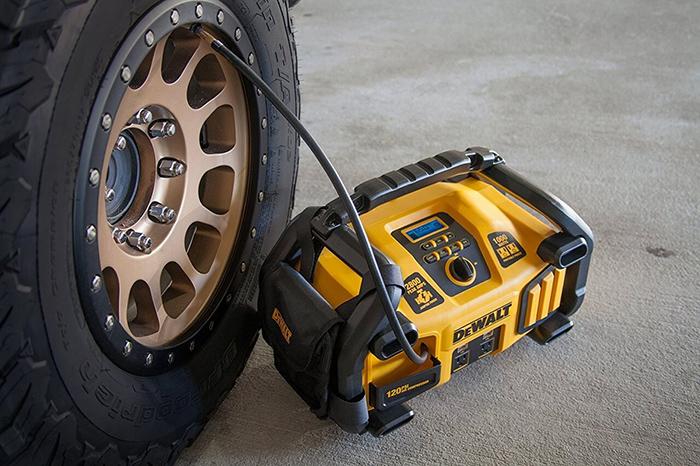 The MILRYPET Car Jump Starter with Air Compressor is a small, light device that should get you back on the road quickly.

It gives up raw power for size, with a peak current of only 500 amps and the ability to start cars with up to 7.0 litres of gas or 5.5 litres of diesel. MILRYPET also says that the car starter can jumpstart a car 20 times on a single charge.

The MILRYPET has a 12000 milliamp power bank that can charge two devices at once through a dual USB output and one quick-charging port. This unit also has a flashlight mode with four settings: normal light, warning light, flash mode, and S.O.S.

The air compressor is a high-powered single-cylinder air pump with 22 cylinders that can produce up to 120PSI.

It has a pressure sensor to make sure the tyre doesn’t get too full, and it says it can fill a tyre to 30 PSI in about five minutes. It also has a memory feature that lets you save the PSI you want for your tyres.

The carry case makes it easy to store.

Unit must be close to full charge to jump.

There may not be enough length on charging cables.

What Are the Features to Check for in a Car Jump Starter?

Make sure the jump starter is rated for your engine type so you don’t end up with a starter that isn’t strong enough to start your engine.

Make sure the starter for an RV or a commercial vehicle can handle more than 12 volts if you want to use it. Also, check the length of the cable, because you’ll need to put the starter close to the battery, but in a place where it won’t fall.

Does It Matter What Kind of Car I Have?

It’s true. Jump starters are rated for different sizes of car engines. Most starters can handle a V4 engine, but to start a V8, you’ll need one with a lot of cold-cranking amps.

Most jump starters won’t work on a battery that is completely dead. The problem is that the dead battery will use most or all of the power, and for your car to start, you’ll also need to send power to the starter engine.

Do I Need to Be Careful When Using a Jump Starter?

Definitely. Car starters put out a lot of amps, which can cause burns. If there is a short circuit, the battery could catch fire or leak acid.

Slowly and carefully, don’t touch both ends at the same time, and make sure the positive and negative wires are connected correctly.