When the battery terminals on your automobile start to corrode, you’ll notice a powdery buildup. In some cases, the powder may turn a different color. Why does a car battery develop blue powder?

Copper sulfate or lead sulfate can create white powder on battery connections. It is known that anhydrous copper sulfate changes color when it is exposed to water vapor.

The white powder will undergo a chemical reaction since the battery terminals are always exposed to wet free air.

Copper is used in the battery terminals’ connectors. Sulfuric acid is contained within the battery and is released through the terminals as hydrogen gas.

The terminals are positioned in a public area with unrestricted access to fresh air. It is because of this reaction that an acidic environment is created in the surrounding atmosphere. The reaction at the terminals is sped up by the presence of salt and water vapor.

This white solution will turn blue when exposed to moisture and copper connectors in the ambient atmosphere. This corrosion is caused by salts of sulfate.

Corrosion on the battery terminals can cause problems starting the engine, limited power supply to the headlights, and even poor recharging of the vehicle.

It is most common to see corrosion on the negative terminal of the battery. Undercharging the battery may be the cause of these symptoms, so keep an eye out for them. In contrast, if the corrosion is found on the positive side of the battery terminal, it indicates overcharging.

The alternator’s failure to give sufficient time for the battery to recharge can be the primary cause of battery undercharging. This, however, may be related to the high demand for electrical power from vehicles and the short duration of car trips. The corrosive compounds will form on the negative terminal as a result of the gasses being exposed.

There will be an excessive amount of gassing if the battery is overcharged. Excess heat in the electrolyte will result in the production of oxygen and hydrogen gasses.

Corrosion can occur when these gases react with other metals on the terminals. It is possible for the plates to be damaged if the battery is old and vented, for example.

How do I get the blue stuff off my car battery? 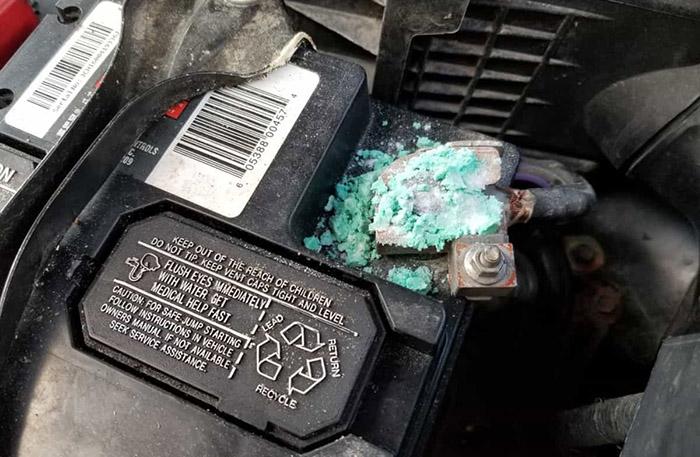 You checked your car’s battery and discovered a blue staff on the terminals?

An anhydrous copper sulfate that causes battery terminal corrosion can be seen in the bluish staff.

To get rid of the blue thing, you’ll need an antidote to it. corrosion might be difficult to cope with. It can be safely removed in this manner.

But if you notice that one or both connections are inflated when you take them from the terminal, you may want to replace them as soon as possible. As a result of the toxins in the battery acid, handling such a batter is unsafe.

How to prevent the appearance of blue powder in the car battery?

This blue powder has appeared on the battery connections of your car from time to time. Despite your efforts to eliminate it, it reappears later.

Overcharging, for example, can lead to a buildup of these chemicals in a battery. Consequently, if you know what causes the terminals to appear blue, preventing causes will prevent such situations.

Are there any other colors on a battery that problems? 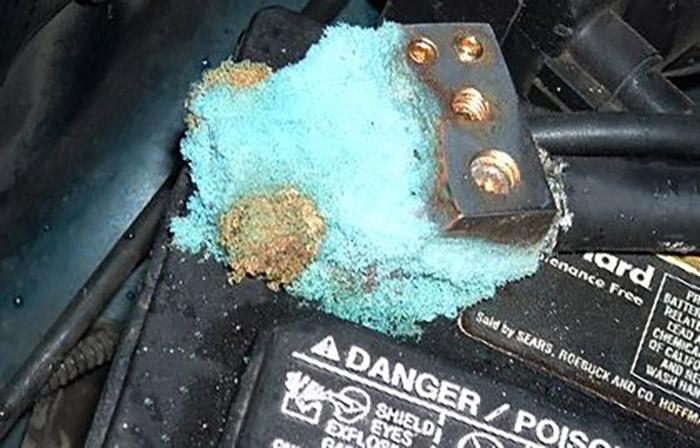 Although the brown color of corrosion is commonly associated with rust, thcause is assumption should be based on the metallic elements themselves, not on the general public’s expectations.

Although battery terminals are constructed of metal, corrosion occurs in a unique form and color that is distinct from other corrosion.

Certain gases and charges produced by battery acids form corrosive compounds near the terminals. Anhydrous copper sulfate or lead sulfate is the most common corrosive chemical found near battery terminals; it is white while dry but can turn green or blue when exposed to moisture.

Corrosion around the terminals of your car battery is simple to spot. In the event that you see white, green and/or blue deposits on the terminals, they are caused by lead sulfate or anhydrous copper sulfate.

Your car’s performance may suffer as a result of these circumstances, so it’s best to clean them up as soon as possible. Checking on the battery’s status on a regular basis will help keep it in top shape.

However, in order to avoid future outbreaks of the bluish substance, you must learn what triggers it.

What Is A C1201 Toyota Error?
Are Mustangs Good Cars
Can You Turbo An Automatic Car
How Do You Get A Medical Exemption For Window Tint In Georgia?