If you go to Acadia National Park, you will already see a lot of beautiful sights. But that doesn’t mean you should go fast on I-95 to get to the park.

When you leave Boston to go to Acadia, you’ll spend most of your time driving through Maine, which is full of vast wilderness and unspoiled beauty.

On the way between the two, there is a lot to see. This is true whether you stay near the coast or go a little farther inland.

Even though you could easily spread out the 4 12 to 5 12 hour drive between Boston and Bar Harbor/Acadia over several days, we recommend taking at least two days to make the trip. 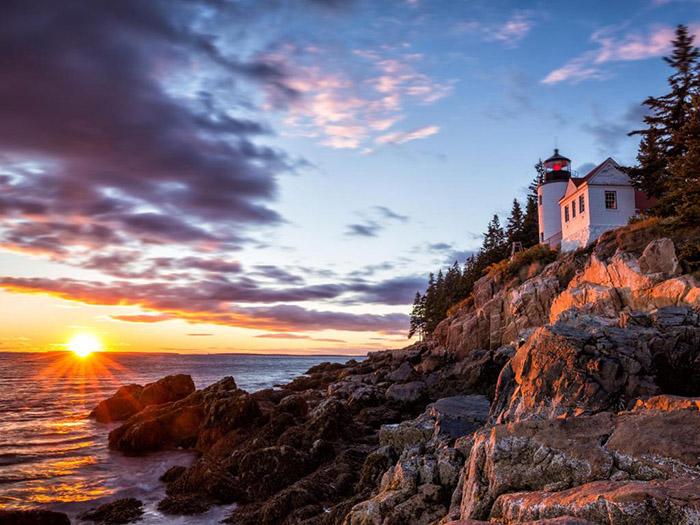 Salem, Massachusetts, is a trap for tourists. And sometimes makes fun of itself.

The town didn’t want to talk about its violent, religious, and witch-hanging past until the 1970s, when the TV show Bewitched made people realise they could make money off of it.

Now, it’s more kooky than scary and more a story than a fact.

But you should still stop by to see the history and the well-kept town.

It also has the House of the Seven Gables, which was the inspiration for Nathaniel Hawthorne’s book of the same name.

Suggested Places to See Around Salem

The House of Witches (The Jonathan Corwin House)

The House with Seven Windows

Drive Time: 1 hour and a half plus traffic

Kennebunkport, Maine, is an old shipbuilding town that turned into a resort town. It has well-kept old buildings, sailboats, and one of the cutest Main Streets you’ll ever see.

Many people who come to Kennebunkport stay there for the night, but you don’t have to. In just a few hours, you can see a lot of what’s worth seeing.

Ocean Avenue is a must-do for people on road trips.

If you get to Kennebunkport in time for lunch, try The Clam Shack, a pop-up restaurant in the parking lot of a fresh seafood market.

Suggested Places to See Around Kennebunkport

The church of St. Ann

The Drive: Go north on North Street/Log Cabin Road (right past the Seashore Trolley Museum) to US-1 North to ME-207 South into Fort Williams Park, Cape Elizabeth.

Cape Elizabeth is just south of Portland. It has Fort Williams Park and the Portland Head Light, which is the oldest lighthouse in Maine and the most photographed lighthouse in the U.S.

When you go there, you’ll see why. The Head Light and its keepers’ quarters, which are now a museum, are on a rocky outcropping that sticks out into the water. This makes for some really dramatic scenery.

Also, there are a lot of interesting old things in the park, like what’s left of bunkers and a 19th-century mansion.

Dramatic views of the ocean

To get to Portland, drive north on ME-77.

15 minutes (plus time for traffic)

On the last part of Day 1, you’ll drive into Portland, Maine.

Portland is the most populated city in the state, but with less than 70,000 people, it feels more like a small town than a big city.

The Old Port, with its brick buildings and cobblestone streets from the 1800s, takes up most of downtown Portland. It’s also where most of Portland’s nightlife takes place.

Eat some seafood, get a drink at a local brewery, and walk around the downtown area of Portland for a while.

Any Portland sights you might want to see will either be open or easier to see in the morning. If you want to see a lot in Portland, you might need to stay an extra night.

Suggested Places to See in Portland

Trail on the Eastern Promenade

The museum of art in Portland 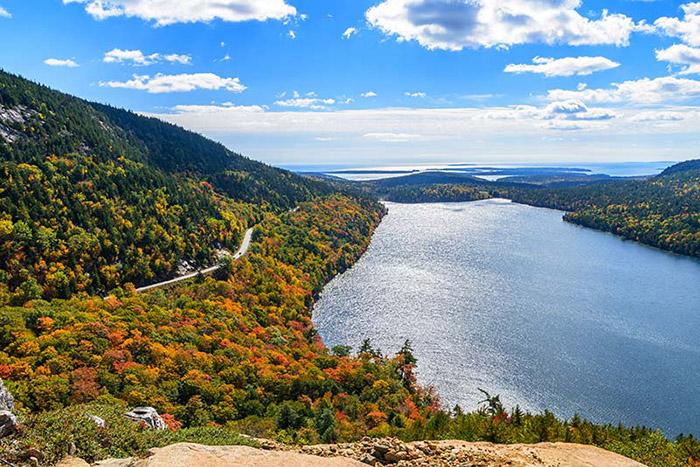 The MidCoast is a part of Maine that you pass through on the way from Portland to Acadia National Park or Bar Harbor. This stretch of coast is known for its rough, striking beauty and its cute seaside towns.

Even though there are a lot of places along this route where you can stop and get good seafood (at least during the summer road trip season), we recommend getting snacks and lunch before leaving Portland.

You don’t want to miss the last thing you wanted to see because you took too long at lunch.

Drive north on I-295 until you reach Yarmouth.

15 minutes (plus time for traffic)

When you leave Portland, you won’t be in the car for long before you reach your first stops.

Just off the highway and inside the headquarters of GPS and wearables company Garmin is a unique attraction that you won’t find anywhere else in the world. Not on this scale, at least.

The Eartha Globe is the biggest rotating globe in the world, and anyone can see it during Garmin’s regular business hours, Monday through Friday from 8:30 a.m. to 5 p.m. It is in a lobby, though, which is all windows. So you can still look through the glass even if you pass through on the weekend.

The Bickford Collection Truck Museum is also in Yarmouth, and true car fans may want to check it out. This open-air pavilion is open from June to October and has a collection of old trucks inside.

If road trips are all about weird, one-of-a-kind things you see along the way, this should be the highlight of your trip from Boston to Acadia.

In the Maine town of Freeport, where L.L. Bean was started and where its main store is, there is a 16-foot statue of a boot with a rubber bottom.

The stop won’t take more than a few minutes (unless you need to buy something), but you’ll remember it for years to come.

As soon as you leave Freeport, you should head toward the coast.

For people who love cars from the early 1900s, Boothbay Railway Village is a must-see. The Boothbay museum has more than 60 old cars from 1902 to 1962 in its collection.

In this re-created village, you can ride in an old train car pulled by a steam engine or, on occasion, in a restored Model T from the museum.

But whether or not you can ride in them, the cars are amazing.

To get to Rockland Harbor Breakwater Lighthouse, take ME-27 north to US-1 north.

A very special lighthouse keeps watch over and shines light on Rockland Harbor in Maine. The Rockland Harbor Breakwater Lighthouse is at the end of a stone sea wall, or breakwater, that goes out to sea for almost a mile.

And, if the weather is good, you can walk the length of that breakwater from sunrise to sunset.

There are no set hours for the lighthouse itself. It depends on volunteers to give tours, so it could be open or closed on any given day. Check the Facebook page to see what dates and times are coming up.

Lucky you if the lighthouse is open when you are there. People can climb up into the lantern and take a look around.

Drive north on US-1 to get to Camden.

Camden, Maine, is a beautiful seaside town that is known for an unusual thing: a waterfall that flows right under its charming Main Street and into Camden Harbor.

The Megunticook Falls in Camden are mostly made by people. They are caused by a series of dams built upstream on the Megunticook River. And where it flows over the rocky coast, it makes for beautiful scenery.

This is a wonderful place to eat dinner. Near the falls, there are many places to eat and lots of fresh seafood.

And you should go see the Camden waterfall before it’s too late. The dams that make it hurt the ecosystem in Camden, so getting rid of them may be the only way to protect the environment.

Take US-1 north to ME-3 east to get to Bar Harbor.

2 hours on the road

When you stop in Camden, Maine, you are less than two hours from Acadia National Park or Bar Harbor.

From late May to late July, the sun sets at 8 p.m., so you may be able to get back on the road in time to see the sea as you drive up US-1 along Penobscot Bay.

Seal Cove Auto Museum is on Mt. Desert Island, where Acadia National Park and Bar Harbor are. If you want to learn more about cars while you’re there, check it out.

This collection of cars from the beginning of the 20th century is in Seal Cove, just across the island, and is open to the public from May to October.

If you go to Acadia National Park or Bar Harbor, you’ll already get a stunning look at Maine’s rugged coast.

Acadia and Bar Harbor don’t have everything you’ll find at your other coastal stops, but they do have a lot of it, like antique cars and seafood.

So, if you like to mix up your road trips, you might want to stay on the interstate and drive through Maine’s big cities instead.

For our other road trip from Boston to Acadia National Park/Bar Harbor, the first two stops of the day are the same: the Yarmouth globe and the Freeport boot.

Maine’s state capital is Augusta. But compared to other cities, it’s a tiny thing.

There isn’t much to see there, but there might be a few things that are interesting.

Capitol Park is right across the street from the Maine State House. From the top of the park, you can see both the State House and the Kennebec River. And the Vietnam Memorial in the park is definitely worth a look.

Fort Western is also in Augusta. Fort Western is the oldest wooden fort in the United States. It was built in 1754, during the French and Indian War.

You could buy lunch here and sit by the Kennebec River to eat it. Or, if you get there a little early, you can grab a cup of coffee at a local shop or at Dunkin’ Donuts, which is a local favourite, and keep going to Bangor.

Part Four: From Augusta to Bangor

Drive north on I-95 to get to Bangor.

Augusta is not as big as Bangor, Maine. In fact, it was almost twice as big. And it gives Bangor a leg up when it comes to the restaurants in the area. (There are also more fast food chains.)

The author Stephen King’s house, which is in the process of being turned into a writers’ retreat and museum, is also in the city. This is a great place to go for horror fans.

There is also a 31-foot statue of Paul Bunyan in Bangor, because one giant boot just isn’t enough strange statues for a day of road tripping.

Don’t worry, car fans, because the Cole Land Transportation Museum has you covered with its collection of cars, trucks, and military items.

The home of Stephen King

Take US-1A east to ME-3 east to get to Bar Harbor.

About an hour to drive.

When you leave Bangor, you’re almost at your destination. Almost anywhere on Mt. Desert Island in Maine can be reached in an hour by car.