Datson has brought back and updated the Go and Go+, which start at Rs 3.29 lakh and Rs 3.83 lakh, respectively. Datson has started taking reservations for these models just in time for the holiday season.

1) “Amber Orange” and “Sandstone Brown” are two new colours. 2) The front bumper was changed, and LED daytime running lights were added. 3) Alloys of 14 inches instead of 13 inches 4) Even the base models have good safety features.

The new Datsun GO and Datsun GO+ are a step in the right direction for Nissan. Here are 5 reasons why Diwali is a good time to buy a Datsun GO or GO Plus:

1) Safety As A Right

ABS and dual airbags are standard features on all Datsun GO/GO+ models. As all car companies get ready to meet the standards for crash tests, these features are starting to show up in cheaper cars. Still, it’s strange to see them in a car as cheap as the Datsun GO.

Not only the government, but also buyers, are rewarding car companies that come with safety features as standard and punishing those that only put them on their top-of-the-line trims. Young people who buy cars know that they need to be safe. Even cab drivers and fleet owners are starting to pay more attention to safety features.

Not too long ago, if you wanted a car with 2 airbags and ABS, you had to buy the version with a touchscreen infotainment system, diamond-cut alloys, and chrome door handles. The Datsun GO and GO+, on the other hand, put safety ahead of things like power steering and air conditioning.

Nissan has clearly got its head and heart in the right place, and this is a good thing to do. I just hope that Nissan has also worked on the chassis and stiffened it so that, if something bad happens, it won’t let things into the cabin. 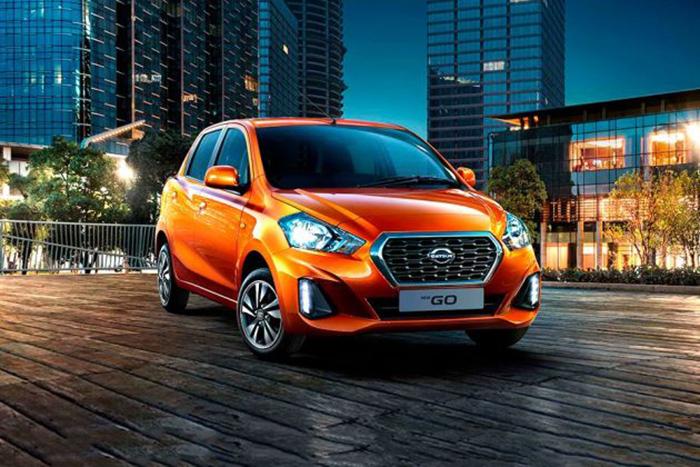 Even though the older Datsun GO and GO+ had simple shapes and lines on the outside, they had some oddities and ergonomic mistakes. For example, the bench in the front was useful, but it was a huge safety risk for the passenger in the middle. It wasn’t wanted by many people, and even fewer wanted to use it. It can never come back.

The hand brake was moved to make room for the bench. The parking brake was under the wheel, and you had to pull and twist it. It was too easy to lose interest, which was a shame. More importantly, it could have been turned off by accident. It’s not a theory; it’s based on real life. In the new car, it’s between the front seats, where it should be.

The infotainment system that let you use your phone as a controller has been taken away. Instead, the top trim comes with a touchscreen that works with both Apple CarPlay and Android Auto. Nothing could be better than this.

The 1.2-liter gasoline engine is still in the GO and GO+. It’s the same one that’s in the Micra. This engine is a real gem, and it shouldn’t be in a car that costs just a little more than the cheap Alto 800.

The motor is easy to drive around town because it has a good low end, but it really shines in the middle range. This car can also drive between 80 and 100 km/h on the highway without any trouble, while the tachometer stays in a calm range of 2300 to 3100 RPM.

It’s both very elegant and surprisingly cheap. In 2016, when I briefly drove the GO+, the car’s MID always showed a number close to 20km/l. It dropped to 19.4km/l after I was stuck in traffic for an hour and didn’t turn off the air conditioner. I want to make it clear that I wasn’t carrying anyone in the back seats. The car may have been slower and used more gas because the cabin was full.

The gearbox was the only thing that made it less fun. The gates on that unit weren’t clearly marked, and the lever wasn’t always easy to move. Let’s hope that the new Datsun GO/GO+ facelift has made it better.

4) All The Right Features

Both of the updated Datsun cars seem to have hit the mark, and they hit it hard. Even the base model (D) has two airbags, antilock brakes (ABS), parking sensors, and basic central locking and power windows in the front. With the A variant, you pay an extra Rs. 70,000 and get power steering and power mirrors.

Buyers in colder areas might not mind, but the rest of us will have to think about the A(O) version, which has, most importantly, remote central locking, rear power windows, and air conditioning.

The T trim comes with a 7-inch touchscreen infotainment system that works with both Apple CarPlay and Android Auto. The Top model has LED daytime running lights, 14-inch alloy wheels, and a washer and wiper on the back.

For a car that starts at Rs. 3.29 lakh, that’s an amazing list of features (ex-showroom.) It’s good to see that Nissan includes safety features as standard and charges a small fee for convenience features, while saving the flash for the top model.

Nissan has fixed the things that people didn’t like about the car’s interior, added safety features, and lowered the price. The cab aggregators and people like you and me are very happy about this news show.

The Datsun GO and GO+ are no longer the “budget” and “cheap” cars you might have thought of in the past. These are really nice cars that can compete with cars like the Maruti Celerio and the new Hyundai Santro in terms of features and performance.

Also, the Datsun GO+ doesn’t have a direct competitor. And this once-ugly duckling could turn into a beautiful swan if the Volvo V90 CrossCountry and Mercedes E-Class All-Terrain station waggons become popular.

If you’re like me and want a car that’s a good deal, the Datsun GO and GO+ are your best bet. If I were looking for a small hatchback, I would have chosen the GO A(O) without hesitation.