California has the most varied landscape of any state in the US. The state is a playground for explorers, with the Pacific Ocean to the west and the Sierra Nevada mountain range to most of the east.

Whether you’re a city-loving urbanite or a backcountry adventurer, California has lots of things to do and sights to see.

Though a good mix of both the city and the countryside is the best way to experience everything this amazing state has to offer. This is just the drive between those two stops and the ones in Central California.

Time to drive: About 3 hours, plus travel time

The drive will take half a day, or longer if you stay in nearby Mammoth Lakes, but you should get there in time to do some sightseeing.

You could also go south to San Jose and check out the Winchester Mystery House before going to Yosemite. But expect at least an hour more driving time.

Visit Yosemite National Park on the way. There will be many places where you’ll want to get out and take a look.

Take a hike. Snap a photo. But you can see a lot from the comfort of your car.

Time to drive: All day if you stop

Suggested Places to See Around Yosemite

The Drive: From Yosemite Valley, take CA-140 west to Merced (your best chance for fueling up on caffeine and snacks).

A little more than 4 hours.

This gives you time to look around both of the coastal towns when you get there.

If you want to stay in your car, you can pay to drive around the Monterey Coast on 17-Mile Drive.

There are some sights to see on it, and you can get your entrance fee back if you eat at a resort restaurant, but tomorrow you’ll be able to see similar (and often better) sights for free.

Suggested Places to See in Monterey/Carmel-by-the-Sea

The centre of Carmel

Take a tour to see whales.

Stay in Carmel-by-the-Sea or Monterey. 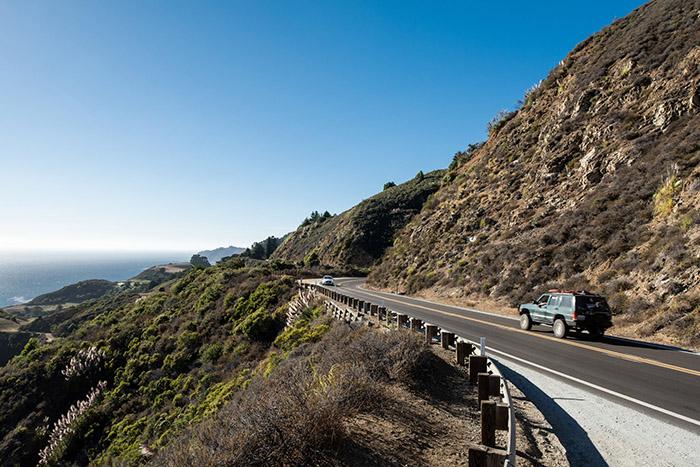 Time to drive: All day if you stop

Get drinks, snacks, and packed lunches before you leave Monterey/Carmel-by-the-Sea. Or, before you go, look up the restaurants along the way.

Because as soon as you leave Carmel-by-the-Sea, you’ll be in Big Sur.

In the Big Sur area, there are a lot of things to see and stay for a while (hikes, lookouts where you can eat lunch), but there aren’t many services, and the road itself makes you slow down and take your time.

It’s also important to know that, even when the weather is nice, many of the roads in the nearby forests can only be driven on with a four-wheel drive. So, if you are driving something other than a car, stay on the main road.

You’ll drive over the Bixby Creek Bridge and the Rocky Creek Bridge, but you might want to stop and take a look.

Partington Cove is a bay.

McWay Falls is a place in the United States.

The Drive: Head north on CA-1 (Pacific Coast Highway) to get to the Piedras Blancas Light Station and Elephant Seal Vista Point.

Drive Time: It takes about 2 hours to get there

Piedras Blancas Light Station and Elephant Seal Vista Point are a little north of San Simeon, but if you like lighthouses and seals, it’s worth the short trip back up the coast. From fall to spring, there are a lot of elephant seals at the vista point.

San Simeon is the way to get to Hearst Castle, which is worth seeing if you like crazy rich people’s homes and shows of money.

Still, you’ll get to San Luis Obispo pretty early. It’s a laid-back city with a cool vibe and a great music scene.

Drive south on CA-101 to get to Solvang.

Then you can do one of two things. You can get to Santa Barbara by driving south on CA-154 past Cachuma Lake. Or, take the 101 again and drive along the coast for a while.

Since the coast is pretty much the same from Santa Barbara, we suggest taking the route that goes through the middle of the state past Cachuma Lake.

Time to drive: About Solvang is 1 hour away

Approx. Santa Barbara is between 40 and 1 hour away, depending on how you get there.

We suggest stopping at Pismo Beach on your way out of San Luis Obispo. It’s the biggest beach in the area and a popular place for surfers.

Solvang is a Danish town with buildings that look like they belong in Europe. They have wineries, good craft beer, and real Danish pastries.

If you’re taking a road trip with kids, stop at Dinosaur Caves Park.

Ostrichland USA (right outside of Solvang, if you dig ostriches)

To get to Santa Monica, take CA-101 south to CA-1 (Pacific Coast Highway) and turn right.

Drive Time: About 2 hours, in theory

Enjoy your last bit of fun driving on the coastal road through Malibu and into the western edge of L.A.

Want to drive instead from Los Angeles to San Francisco? Our one-week trip from San Francisco to L.A. You can go backwards on a road trip.

But the best views are on the south side of the road, where the water is.

These plans can be added to our one-week plan for driving from San Francisco to Los Angeles to make a trip that takes about two weeks. We assume you’ll be starting your Northern California road trip from a big city, so we use San Francisco as our starting point.

Time to drive: About 6 hours (about the same from Portland, Oregon, or about 4 12 hours from Reno, Nevada.)

Even though you’ll be driving on a lot of interstates, you’ll know you’re there when you hit CA-299 through the forests of Northern California. The drive is more beautiful than you might think, but you have to go through Redding first.

The most beautiful way to get here is from Reno, through Plumas National Forest.

You can stay at a campground or one of the (few) hotels near Modoc National Forest.

Alturas, CA is the best place to stay if you want to sleep inside.

Drive Time: All day both days, and then some, with stops. You might wish you had more time, but you still have a lot to see.

If you stay in Mount Shasta, you’ll wake up to a beautiful view.

Time to drive: About 5 ½ hours

If you take this route instead of staying on the highway and coming in through Napa, you’ll roll right into the valley.

If you leave early enough, you should have enough time in Napa Valley to taste a couple of wines.

Just make plans ahead. Only a few wineries have tastings at night, and they can get full.

Stay at a (pricey) hotel in Napa Valley. Or, if you want something a little easier on your wallet, think about the Sacramento suburbs, which are less than an hour’s drive from Napa Valley.

Take the morning in Napa Valley, where brunch is popular, to wait out rush hour. After that, go to San Francisco.

This route goes through the Marin Headlands and over the Golden Gate Bridge to get to San Francisco.

Before crossing the bridge, you might want to spend some time in the Golden Gate National Recreation Area.

Suggested Places to See Between Napa Valley and San Francisco

The observation deck at Battery Spencer

Do not leave San Francisco.

The trip is by car, but you’ll want to leave your car in San Francisco. Even though San Francisco has hills, it is a city that you can walk through. There is too much traffic to enjoy driving through it.

The only times this isn’t true are:

At 31.5 percent, the slope of Filbert Street and 22nd Street between the above cross streets is the steepest in the city. Both of these streets only go down. (You don’t drive up them, you drive down them.)

Here are three places in the city where driving is a lot of fun.

Garden of tea in Japan (in Golden Gate Park) 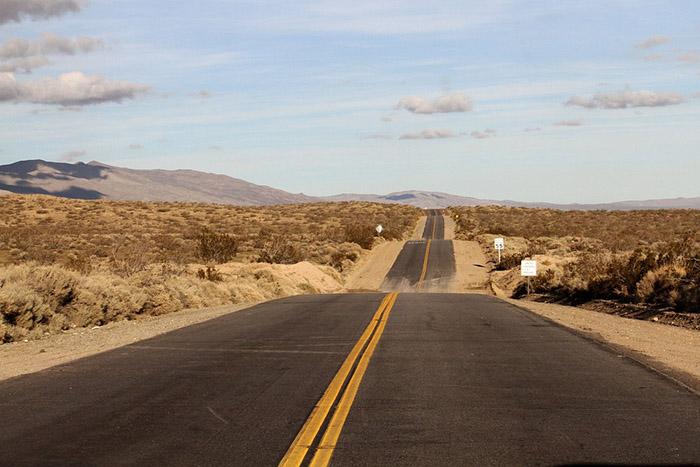 For our road trip through Southern California, we’re going to assume that you’ve already driven from San Francisco to Los Angeles and will spend a few days there.

A lot of travel sites say that you should stay in Los Angeles for two days. That’s not good enough.

If you want to learn more about what makes L.A. famous (from TV and movies), you must have at least three days.

Even if movies and TV aren’t your thing, Los Angeles is a big, spread-out city with lots to see and do. And because of traffic, you’ll be on the road for a long time between stops.

The Walk of Fame in Hollywood

The Drive: Take I-10 east. Or, if you’re in the mood for adventure, you can take CA-60 to CA-79 to CA-74 and drive through San Bernardino National Forest on the roads that go back and forth.

You’ll have time to check out Palm Springs/Palm Desert, an oasis in the desert.

The centre of Palm Springs

The Drive: To get to the Joshua Tree National Park Visitor Center from Palm Springs, head northeast on CA-62.

Joshua Tree National Park is one of the best places in the desert of southern California. It’s actually the Mojave and the Colorado deserts (part of the Sonoran Desert).

The best way to understand this part of California’s geography, which is hard to understand from the coast, is to go to Joshua Tree.

Time to drive: 3 hours and 45 minutes, plus traffic.

The first part of this drive will take you along the edge of Anza-Borrego Desert State Park and around the Salton Sea, which is California’s largest lake and was once a popular resort area but is now almost a ghost town.

Julian is a cute mountain town in California that is also a California Historical Landmark. You don’t have to stay long, but you should drive down Main Street and stop for a snack in the afternoon

The town is in an area known for its apples and apple pies.

The second part of the drive will take you right by Lake Cuyamaca, through Cuyamaca Rancho State Park, and out into the easternmost suburbs of San Diego.

Suggested Places to See Between Palm Springs and San Diego

The Sea of Salton

If you have a few hours to kill and don’t mind the hike, you can go to Cedar Creek Falls.

We assume you’ll add as many days as you want in San Diego, just like you did in San Francisco and Los Angeles.

If you only have one full day in the city, we recommend you visit these three places:

This will give you a nice overview of the city and access to dozens of museums if you have some extra time.

Have three weeks to drive around California?

What You Need to Know Before Driving in California

Dangerous weather is common in California. Also mudslides, not just fires. Any time of year, roads may be closed, especially those that go through national and state parks.

Many of the national and state park roads in California are at higher elevations and close for the winter. Check to see if any roads are closed before you go.

Road trips in Northern California are best in the summer.

There are fees on some of these routes. Have money on hand.

There is a lot of traffic in all of Southern California and around San Francisco. Our drive times are best-case scenarios. There are often back-ups of an hour or more. Prepare for it.

Can Autozone Register Bmw Battery
What Can A Faulty Abs Sensor Cause
How Hard Is It To Rebuild A 4l60e Transmission 5 Best 4l60e Rebuild Kit
Why Is Subaru Outback Brake Light Flashing?