Motor oil needs to have a certain viscosity for it to work as it should.

If the oil is too thin, it doesn’t protect the engine as well as it should. If it’s too thick, it makes it hard to start the engine.

So, when it’s cold outside, what happens to motor oil? Does it freeze up solid like water or stay liquid longer, like gasoline?

Motor oil is made from petroleum, which doesn’t freeze solid but instead gets thicker when it gets cold. Even though it doesn’t get hard or crystallise, it loses the fluidity that lets it move through the engine and keep it from getting too hot.

When motor oil gets thick, it doesn’t move as well, which could damage the engine parts in cold weather.

Read on to find out more about what happens to motor oil when it freezes.

What Temperature Does Motor Oil Freeze? 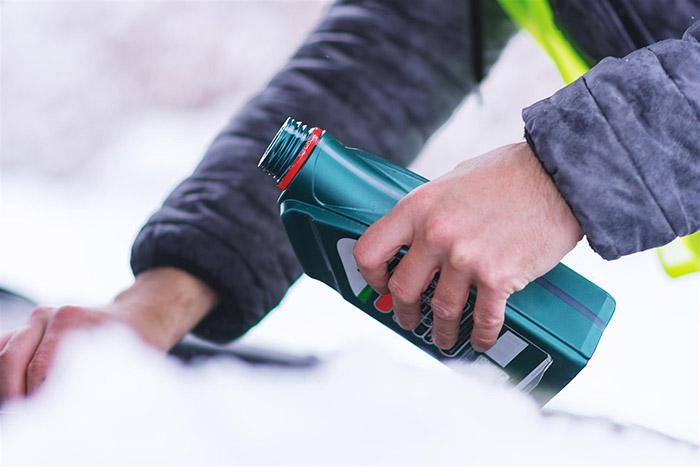 When it gets cold, motor oil doesn’t freeze. But the texture and consistency become almost solid, which stops it from flowing.

At 0 degrees Fahrenheit (-18 degrees Celsius), the oil doesn’t move as smoothly as it should.

The molecules in the oil stick together, which makes the oil more slippery.

These molecules are less likely to move around.

The pour point of any oil is the lowest temperature at which the oil will flow out of a container when it is tilted at a certain angle.

At 20 degrees Fahrenheit, most oils get as thick as maple syrup (-7 degrees Celsius). But every oil has a spec sheet that tells you exactly what its pour point is.

Conventional motor oil has wax in it, which makes the oil thicker when it’s cold outside.

The harder it is to move through the engine, the thicker it is.

Conventional motor oil has wax in it, but synthetic oil does not.

The viscosity index of these oils is also high. This is a measure of how viscosity changes when the temperature changes.

Even at temperatures as low as -20 degrees Celsius, synthetic oils can still work well (-4 degrees Fahrenheit).

They can only be poured at -50 degrees Celsius (-58 degrees Fahrenheit).

Synthetic oils flow very well and can keep their low viscosity even when the engine is cold.

Because of how they are made, these oils don’t freeze or solidify quickly.

How Long Does It Take Motor Oil To Freeze? 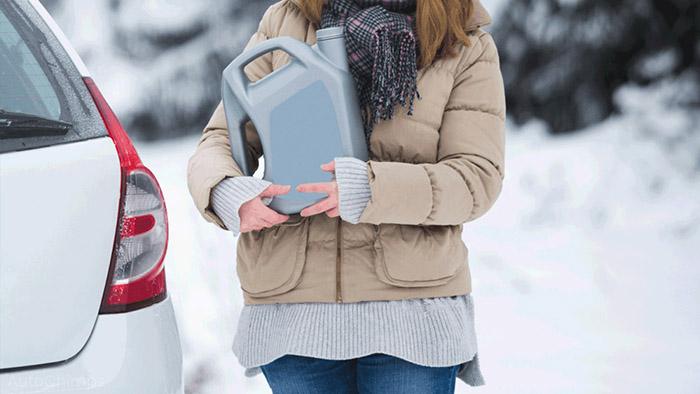 When it’s below zero, motor oil doesn’t freeze, but it does get thicker, which makes it harder to start the engine.

When an engine has been sitting still for a long time, usually overnight, it gets cold.

Overnight, the motor oil inside the engine gets cooler and thicker.

When you start the engine in the morning, the thickened oil doesn’t move as it should at normal temperatures.

What Happens When Motor Oil Freezes?

There is no crystallisation in motor oil, so it doesn’t freeze solid. It gets thicker and fights against the flow.

The oil either loses the energy it needs to move or doesn’t move at all.

In cold weather, this extra strain makes the battery weaker.

When engine oil is too cold, it grinds and scratches, which wears down the engine.

The thickened oil also blocks some paths, which stops the engine parts from getting the oil they need to work well.

The engine either breaks down completely or has to be fixed at a high cost.

Also, cold engines take longer to warm up, which means they use more gas and aren’t very efficient.

Can Motor Oil Be Stored Outside in the Winter?

It’s not a good idea to store motor oil outside when it’s freezing.

Gasoline and motor oil should always be kept in a place where the temperature stays the same.

Too much heat or cold changes the chemical makeup of the oil and makes it less effective.

People who live in places where the weather can get bad shouldn’t keep motor oil in their trunks or garages.

For the oil that’s already in the car, it’s best to buy the kind that’s best for driving in the winter.

When the viscosity grades are lower, it means that the oil can work well in cold weather.

You should also think about getting your car ready for winter.

When a car is left outside, coolants or antifreeze products help keep the engine from freezing.

Before you buy these products, check the owner’s manual to find out what the manufacturer recommends.

What Are the Effects of Increased Oil Viscosity?

When the viscosity of motor oil goes up, it moves through the engine more slowly.

When motor oil gets too thick, it also hurts the gearbox and the system that moves the oil around.

The part of the gear that is under water can’t push thickened motor oil to the other parts of the engine.

When the viscosity of the oil goes up, you also need more torque to start the engine.

Too much energy is used because of extra friction when the load goes up, or the engine gets severely damaged.

When the temperature is very low, the base oils in the oil can separate into different layers.

Also, the additives in the oil become insoluble, separate from the base oils, and end up at the bottom of the sump.

These additives are important, but the motor oil will no longer work if they settle to the bottom and turn to sludge.

Can Motor Oil Already in Your Car Freeze?

Motor oil can’t freeze because it’s made from petroleum, so it won’t freeze in your car. It sticks together and gets thicker, which makes it hard for the oil to move through the engine.

When motor oil is left out in freezing temperatures, its chemical properties can change.

Because of this, the oil stops working and doesn’t protect the engine parts as well as it should.

What Is the Most Appropriate Motor Oil for Use in Winter?

During the winter, you should use oil made for cold weather. It’s easier to move with and doesn’t slow down.

The best choice is motor oil with the letter W in the name.

Even when it’s very cold, motor oil doesn’t turn solid, but it doesn’t move around as well.

So, any movement in the engine parts can break some parts, like the oil pump or the mechanism that moves the car forward.

To keep your engine from having problems like these, choose motor oil that is light in weight or winter-grade oil for the colder months.

You can read the oil’s label to find out how thick it is. Winter-grade oils come with a special label that has the letter W on it.