Getting behind the wheel while you’re sleepy is a recipe for disaster. Overtired drivers not only endanger themselves, but they also endanger the lives of everyone else on the road, including pedestrians. Stop driving immediately if you can’t keep your eyes open and don’t get behind the wheel again until you’ve had some rest.

Cars can be parked and used as places to sleep if you don’t have anywhere else to go. Is it, on the other hand, safe to sleep in a running automobile AC?

The heat of a summer day or a long cross-country journey may have worn you down and you are in need of some much-needed rest in a cool place. If you want to sleep in your car while the AC is running, it’s crucial to know how to do so securely. Regardless of the cause.

Can I Sleep In My Car With The AC Running? 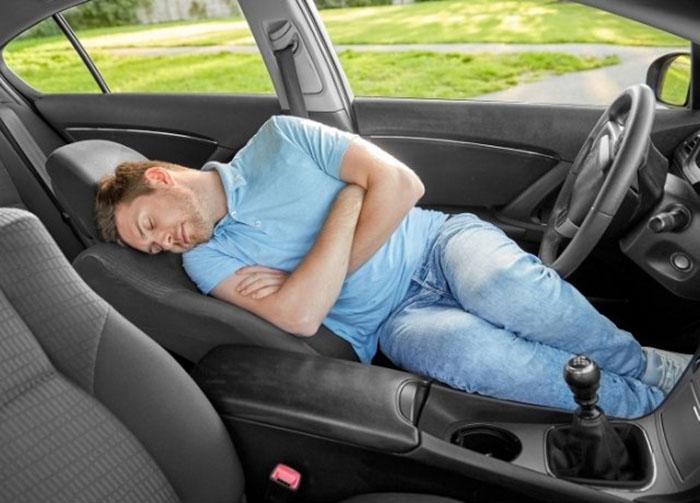 Truck drivers and those who drive for a living are not unusual in their habit of taking naps in their cars. Driving for a living does not exempt the general public from the necessity of taking frequent breaks to rest their eyes and recharge their batteries.

Leaving the AC running while sleeping in a car is risky, and drivers are strongly discouraged from doing so.

Leaving the air conditioning on for long periods of time can put you and your vehicle at risk. Even while it’s feasible to sleep in your car while the AC is on, it’s crucial to know that doing so could be fatal.

Risks Of Sleeping In a Car With AC Running

People can become ill or die as a result of breathing in too much carbon monoxide. The poisonous gas blocks oxygen from reaching the body’s tissues and organs.

If your car’s exhaust or air conditioning system has any leaks, the carbon monoxide can be circulated inside the vehicle rather of exiting the exhaust pipe and entering the atmosphere outside.

It is more dangerous to sleep with the AC on if the exhaust system of your car is leaking carbon monoxide. It’s rare that you’ll end up in a car accident if you have a working air conditioner, but you’ll need to be sure that there are no gas leaks in your car’s systems first.

You won’t wake up if carbon monoxide seeps into your car while you’re asleep. Before you opt to sleep with the AC on, make sure there are no leaks because carbon monoxide has no odor and will put you to sleep if you are poisoned with it.

Air conditioning systems sometimes have leaks that can be difficult or impossible to discover, thus drivers are advised to avoid using it while they sleep, since doing so could result in catastrophic repercussions.

Can Running The AC For a Long Time Damage My Car?

Your car could be damaged by you sleeping in it with the AC on, so if the risk of your life isn’t enough of a deterrent, you might reconsider after hearing what it can do to it.

Engine overheating can occur if the air conditioner in your vehicle is left on for long periods of time while you are asleep. While driving, the AC is set to run automatically. The outside air and the fans work together to keep the engine at a comfortable temperature.

Engine cooling isn’t as complete when you’re sitting in traffic, even if you’re using the AC.

Risk to the car radiator

If your engine overheats, the radiator in your automobile will likely be destroyed, necessitating an expensive repair or replacement. The cost of a new radiator outweighs the benefit of running the air conditioner while you sleep.

Risk to a car battery

Long amounts of time spent idling with the AC on might deplete the battery in the vehicle.

The last thing you want to learn when you wake up from your car snooze is that the battery is dead and you can’t start the car!

There are no dangerous exhaust fumes for electric car drivers to worry about, but operating the AC for a lengthy period of time can still cause overheating.

Damage to your car while you sleep is a pricey inconvenience, but carbon monoxide poisoning is extremely dangerous. By sleeping with the AC on, you are endangering your health.

Tips To Stay Safe While Sleeping in Your Car 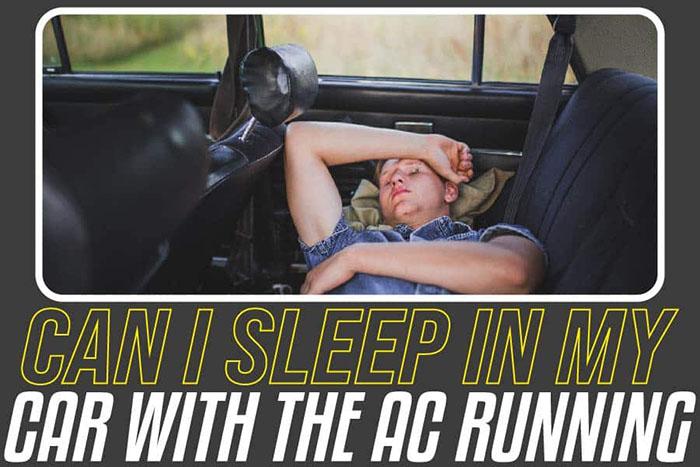 The exhaust fumes from your car can be avoided if you must spend the night in your vehicle.

We’ve compiled a list of the best ways to sleep soundly in your automobile.

Can I Leave My Car Running While I Sleep in It?

Leaving your automobile running while you go to bed is possible, but it is not recommended. Your health and the health of your car’s engine could be at risk if you run the air conditioning while you sleep. If you want to sleep in your automobile, make sure you turn off the engine.

Will I Run Out of Air if I Sleep in My Car?

An automobile’s air is constantly being replenished with fresh oxygen, according to research. Since most cars are quite large, you would have to spend a long period inside to exhaust all of their oxygen. It would have been replaced with fresh air at that moment anyhow.

You don’t even have to open the window if you don’t want to risk running out of oxygen, according to new research. An open window will, of course, improve ventilation, but it isn’t required.

Take a little snooze in your car if you’re feeling drowsy while driving, but be careful about turning on the AC. You may read about the dangers of sleeping in a car while it is running and the harm it can do to your vehicle in this post.

It is our goal that you have found this post informative and that you now have all the information you need to sleep comfortably in your vehicle.