Can I Use Water Instead Of Antifreeze Updated 09/2022

In the automotive industry, this is a common question. In this article, the pros and cons of using only coolant, water, or a combination of the two, will be discussed.

Water can temporarily replace coolant in an engine if, for example, a pipe broke on the road and coolant flowed and you didn’t have any spare, but only as a temporary fix. Distilled water should be used instead. You can also use regular tap water.

When you arrive, flush the cooling system with coolant to ensure that the water is replaced with coolant. Temperatures above freezing point are ideal for this type of emergency situation. Water might also boil away if it’s too hot outside.

It’s normal to mix water and coolant, but only when there’s no diluted coolant involved. There is information on the different types of coolants here.

Ethylene glycol antifreeze should not be mixed with water and used long-term since it loses most of its features, such as ideal viscosity, heat transmission, detergent capabilities, corrosion prevention, when its chemical composition changes. This causes the foaming process to begin. Later, it will be difficult to remove the cooling system from the foam because it is encased in it.

Why use coolant instead of water for the car’s engine? 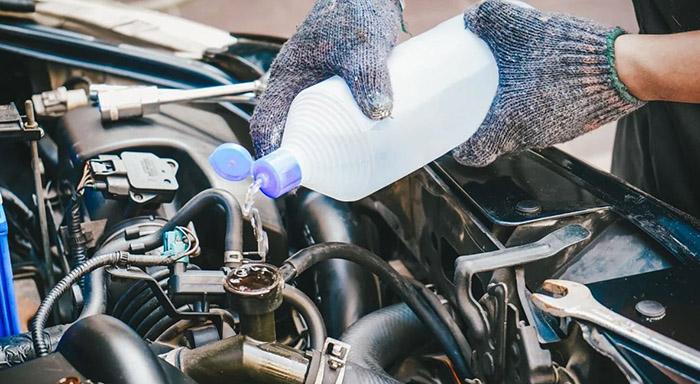 Coolant should be used at all times to guarantee that the engine warms up evenly and protects it from overheating. Since its composition prevents it from freezing at very low temperatures, antifreeze is able to handle temperatures as high as 110 degrees Celsius (230 degrees Fahrenheit). Isn’t it simpler to just use antifreeze in the cooling system because it already contains water? Honestly, no.

Water, as opposed to coolant, has the following drawbacks when it comes to cooling the engine:

Why is the use of water dangerous for the engine? 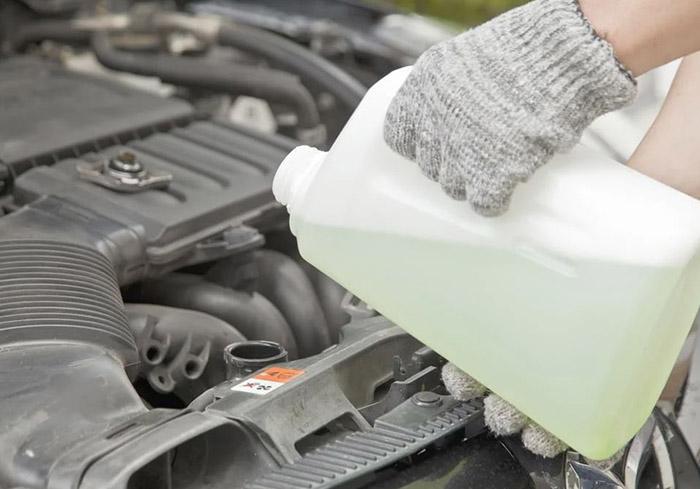 Experts advise against taking this course of action. Many factors contribute to this. Firstly, the engine is affected by the hardness of the water. For one thing, hard water can cause an engine to overheat because it clogs the radiator, making it impossible to cool the vehicle. Third, water freezes and can simply break the parts of the cooling system at freezing temperatures.

As far as heat transfer efficiency is concerned, water is no less effective than coolant. No matter what happens, the engine may still function and remain cool if water is pumped into its cooling system. The ultimate temperature may only rise by 2 to 3 degrees, but it will have no substantial impact on the weather.

It’s best to use distilled water. There is an excessive amount of salt and limestone admixture in other forms of water, such as drinking water.

A clogged radiator will reduce cooling effectiveness, and over time, the metal will begin to develop microcracks as a result of the buildup of these chemicals.

In addition, because water dissolves a significantly greater volume of oxygen than coolant, cooling systems are prone to air blockages. Coolant circulation is also disturbed when an airlock is present, and the pump simply ceases to circulate water (which also overheats).

When the temperature rises or falls, water expands or contracts more rapidly. Because of this, once the engine has warmed up, the reservoir will begin to fill with steam. The coolant reservoir can be entirely ruined if the valve is also defective.

Water will freeze if the atmospheric temperature falls below 32 degrees Fahrenheit. This results in damage to the cooling system components, such as burst pipes and radiators, and to the engine block.

When water can be added instead of coolant?

Only in the event of an emergency and no coolant is available, can water be used as a coolant substitute. Antifreeze is a better option than water when it comes to thawing frozen pipes. Overheating is exacerbated when the operating temperature of the engine is above 100 degrees Celsius (212 degrees Fahrenheit). Coolant levels should be checked frequently if you have to travel long distances.

How to return the cooling system to normal after filling it with water?

Use distilled rather than tap water to reduce the negative consequences of utilizing water as a coolant. This product is completely free of salt and scale. The system must be returned to its regular state even after utilizing distilled water.

Rinsing is all you need to do to complete this task. This is how it’s done:

Once you’ve warmed up the engine, turn it off and allow it to cool for a few minutes. The old fluid must first be drained before the new one can be added.

Clean the cooling system by using a cleaning chemical that can be purchased at any car shop. It’s important to remember that each one has its own set of rules for use, which may be found in the instructions. After flushing the system, you can add coolant.

Only one conclusion can be drawn: water should only be used in rare circumstances; otherwise, antifreeze should be used to prevent cooling system damage.