If you run out of coolant, how can you keep the engine cool? You may have seen someone in a movie use water before.

Can you actually replace your coolant with water in a pinch?

In a pinch, water can be used instead of coolant. But doing so is still risky because water doesn’t have the same properties as oil and could cause the engine to get too hot.

It might help a little with cooling the engine, but it’s dangerous.

Water doesn’t have the same properties as real coolant does.

Coolant does more than just keep your engine cool. It also keeps it from getting rusty, which water doesn’t do.

What Happens If You Use Water Instead of Coolant?

If you use water instead of coolant, nothing will happen, at least not right away. If you have nothing else, you can use water to keep the engine from getting too hot.

But you shouldn’t always count on it to protect the engine.

Coolant is good at what it does because it has certain qualities.

One of them is when it starts to boil. At 212°F, water boils. To raise the boiling point by a few degrees, you can mix it with 50% glycol antifreeze.

But if the coolant doesn’t have any water in it, it will boil at 375°F.

That’s close to the temperature at which your engine works, so it won’t evaporate.

Water isn’t very good for this because it evaporates too quickly.

If you compare it to antifreeze, it has a pretty low boiling point. Within a few minutes of driving, you’ll start to boil it, which will make it go away.

If you drove with water in your car for too long, it would evaporate and cause your engine to get too hot. So, you should only use water if you don’t have any coolant and only have to go a short distance.

If it fell below that, it would freeze inside the engine and crack the block.

If you let water freeze in the radiator, it could damage the whole system that keeps your car cool. Even when it’s below freezing, that won’t happen because of antifreeze.

Water also has a lot of minerals and other things that aren’t good for you. When there is water in your radiator, these build up on the inside of your engine.

Also, water can cause the metal parts of your engine to rust.

Since antifreeze doesn’t leave anything behind, it keeps the engine from rusting.

It won’t start to rust from the inside, either. Some of them have additives that stop rust from happening at all.

What will happen if you fill your car’s radiator with water and drive it for a while?

The first thing that will happen is that it will start to boil.

When water boils, some of it evaporates away, leaving the radiator empty. When it’s all gone, your radiator will no longer cool the engine.

Then you’ll know it’s getting too hot, sending the temperature up.

You can stop to let the engine cool down, but the radiator will need more water.

If the engine gets too hot from driving too much, the whole thing could break.

You’ll also notice how the engine works when it’s almost freezing outside.

At that temperature, any water you put in the radiator would start to freeze, making it grow.

If you let the water in your radiator freeze, it could break your coolant system.

Lastly, putting water in the radiator speeds up the rate at which the engine rusts. That’s because water makes rust and carries harmful things with it.

Anything that is in the water ends up inside the engine.

If these deposits stay on the radiator for long enough, they could stop it from working at all.

What to Do If You Do Use Water 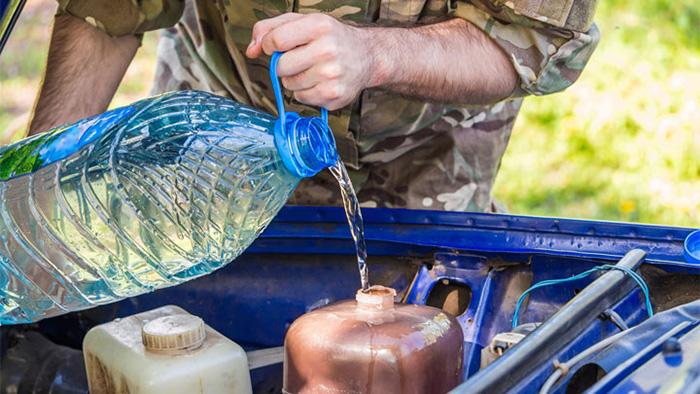 Not everyone knows when they need to add more coolant to their radiator. So, when the time comes, they might not have any with them.

If you run out of coolant, how can you use water to keep the engine from breaking?

First of all, you shouldn’t have to use water. But if you’re going to use it, here’s what you can do.

Mix it with the antifreeze that is still in your radiator.

The properties of a 50/50 mix will be better than those of pure water. So, putting some in the radiator wouldn’t hurt your engine as much.

Pour some water into it without getting rid of what’s already there.

As soon as you put water in the radiator, you should go buy antifreeze.

You don’t want to drive for a long time with water in there. If not, you could break the engine block and turn the car into a brick.

Go to a store close by where you can buy antifreeze. Then, go get some that are right for your car.

Before you put antifreeze in the radiator, you’ll need to drain the water out of it.

Usually, you can drain the radiator by opening a plug at the bottom and letting everything drip out. After you get rid of all the water, put the antifreeze in there.

When you fill the radiator with water, it’s not easy to get it all out. So, you might have to do this more than once to get everything out.

Once you put antifreeze in your radiator, you can drive.

After you’ve driven for a while, you should add more antifreeze. While you are driving, most of the water should evaporate.

That’s when you can finish filling your radiator with antifreeze.

What Is Coolant and How Does It Work

A lot of people get antifreeze and coolant mixed up. There are a few differences, but they are mostly the same.

Since these don’t freeze at the same temperature as water, they stay liquid when it’s cold outside. There are many different kinds of antifreeze, which are all marked by colour.

If you don’t want to hurt your radiator, you have to fill it with the right colour of coolant.

When the engine is turned on, the coolant takes in heat from the engine.

After leaving the engine, hot coolant makes its way to the radiator. That’s where it gives off heat to the surrounding air.

Most radiators have a fan that blows on the coolant lines to speed up the process.

Your engine won’t freeze up when it’s too cold because of the coolant. Because it is made with chemicals that freeze at very low temperatures.