Tesla cars are becoming more and more popular, but people often ask if it’s safe to charge them in the rain. They are electric cars, after all, and no one wants to get shocked while trying to charge their car.

Teslas can charge even when it’s raining because the charging parts have built-in safety features and the electricity doesn’t start flowing until the car and charger are properly connected. But you should still keep the charger from being completely submerged in water.

Even though the short answer is “yes,” you can charge a Tesla in the rain, you should still take some precautions for your safety and the long-term health of your car.

Tesla Charging in the Rain: Can it Be Done? 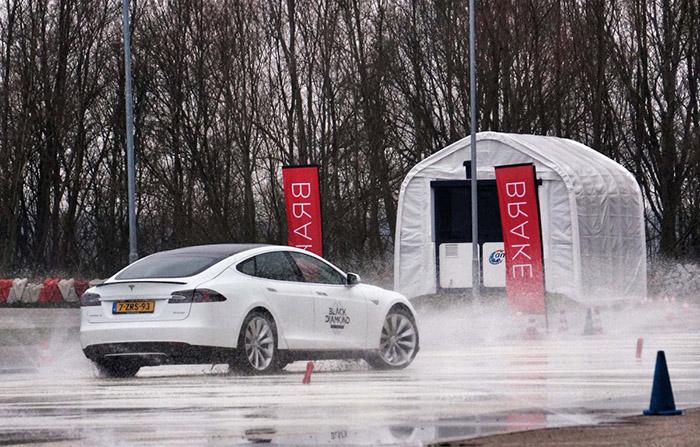 So, if you need to charge your Tesla whether you’re at home or on the road, what do you do when the weather makes it harder?

Rain can stop you in your tracks and make you think about whether you should try to charge your car and keep going or wait a while to see if it stops.

Since water is a good conductor of electricity, it makes sense that people think rain would give the person trying to plug in their car an electric shock. But that might not always be true.

If you thought you could charge your Tesla even when it’s raining, you’re right!

The parts that connect your car to the charger are made of high-quality materials that are made to be used outside. They can be used safely in the rain and won’t cause any problems in the process.

When the charger cord is plugged into the car, there will be an electrical current, but it won’t be as strong until the car and charger talk to each other and agree on when the current should start.

This makes sure that you and your car are safe and that rain and water won’t hurt anything while you are hooking everything up.

You can charge your Tesla in the rain because of how it is set up, but that doesn’t mean you shouldn’t take any precautions.

When you’re charging your car at home, for example, you should double-check a few things to make sure you’re doing it safely.

Even though you probably wouldn’t do this on purpose, the Tesla owner’s manual says that you should never spray a liquid at high speed at the car while it’s charging.

One common example of this would be using a pressure washer to clean your Tesla (more information on this topic here). Just be careful about what you do near and to your car while it’s charging.

The charging stations are made to work in all kinds of weather. Your house’s outlets might not have the same high-quality safety features that will keep you safe even if it rains a lot.

One problem is that the outlets aren’t always safe from rain.

When there is wind, rain can fall at an angle that could allow it to get to the outlet. This could be a problem if it is not inside or completely covered by an awning or roof ledge.

Because they are not made with the same level of safety and use as charging stations that are meant to be outside in all weather, you could be taking a risk if you use an outdoor outlet at your home to plug in your car instead of an outlet in your garage or one that is hooked up inside with an extension cord.

Even though chargers are made to be used outside, you shouldn’t assume that or forget that you should still act as if it’s raining.

Still, you should try to cover the cord as you plug it into your car and make sure you don’t take your time and let water get into any of your car’s compartments.

You shouldn’t mess with luck, and it’s always better to be safe than sorry. Water can also cause other problems, like puddles where you could lose the cord.

Even though making the charging station waterproof is a good thing, that doesn’t mean it would still work if you put it in water. So, connect the cord to your car and don’t mess around or you might cause yourself trouble.

Also, keep in mind that you won’t be the only one using these charging stations. If another car owner broke one of the chargers by misusing it, you might have to deal with their karma.

So, take care to make sure that other things don’t hurt your car.

As a convenient way to find and hook up to a charging station on the road, Tesla drivers can find places along their route that have built-in chargers so they can plan where to stop.

This makes owners feel like they can still take long trips and drives without worrying about their battery dying.

At these charging stations, you can plug your car in and let it charge for up to 30 minutes. You can even get an alert on your phone when your car is done charging if you download the Tesla app.

But that’s not the only way to deal with it. There are also other options, like the wall connector that lets you plug your car in at home so you can charge it every night, if you need to.

Even though an electric vehicle is the same size and style as a regular vehicle, the engine works differently. Electric cars don’t have an internal combustion engine like most cars. Instead, their electric motor is powered by a large traction battery.

Because the batteries in electric cars are different from those in cars with internal combustion engines, they need to be charged to keep their power. Some use charging stations, while others can be plugged into a regular GFCI wall outlet.

Benefits of an Electric Vehicle

Many companies and people are changing their ways of life because of the effects of global climate change. The automotive industry has come up with new ways to reduce emissions from driving cars and make vehicles that have less of an effect on the environment.

Electric cars don’t use gas, so they don’t pollute the air as they drive.

Also, these cars go faster than most other cars, which can make them feel a lot lighter to drive. They also have a battery that is usually covered by a warranty for a long time and is made to last for close to 100,000 miles.

Even though you may have thought that the answer to this question was definitely “no,” you can learn something new from this article that will help you when you’re driving or commuting in your Tesla.

You can drive your electric car no matter what the weather is like, and now you know why and how to stay safe while your car is charging.

But it should be said that you should think about how good your car is in general. Teslas are newer than other electric cars, but not all electric cars are made to the same standard.

This means that your used car might not be in the same good condition as a Tesla. You are taking a risk by charging your older electric car in the rain, especially if you don’t take any precautions.

The good news is that if you drive a Tesla model, you’re at the top of the list and can pretty much use your car in any weather.

With a little planning and knowledge, you can take a road trip in your Tesla, even if it rains.