If you have a Tesla and a generator for your home or for camping, you may have thought about charging your Tesla with the generator.

If you did this, you would have a lot of freedom on long trips where there are a lot of miles between charging stations.

But can it be done? Can a generator safely charge a Tesla?

A generator can be used to power up a Tesla. You’ll need the right adapter to ground your generator and make sure it can give you a clean sine wave that hasn’t been changed. Also, the generator must be warmed up first, and the amps must be set on your Tesla’s dashboard monitor to the lowest setting possible.

Now that you know it’s possible, let’s take a closer look at what it takes to charge your Tesla with a generator.

How Big of a Generator Do You Need to Charge a Tesla? 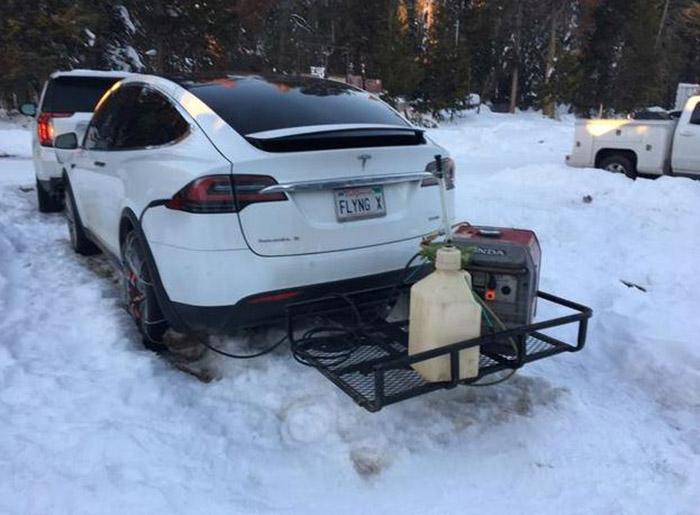 If your Tesla has almost no power left and you want to charge it all the way up, you will need a generator with at least 1500 watts of power.

If you have less than that, you might not be able to charge your car before your generator dies.

Most Tesla owners who want to charge their cars with a generator need one with at least 4000 watts of power.

Even with all of this, we’ve found that you’ll still have to wait a long time for your Tesla to reach full power.

Even if you use a 4000 watt generator, it will take at least 24 hours to finish the job.

Also, keep in mind that your generator will need multiple tanks of gas along the way to keep running. Before using this method to charge your Tesla, think about how much it will cost and how convenient it will be.

How Long Would it Take to Charge a Tesla with a Generator?

For example, let’s say we want to charge a Tesla with a regular 110V outlet.

Once the car is plugged in, it will take about seven hours to fully charge.

Next, when a 220V outlet is used, the time it takes to charge is cut in half, and most cars can be fully charged in just under four hours.

If you choose to charge your Tesla at a Supercharger site, it only takes 60–75 minutes before you’re ready to go.

Even though most home or portable generators will work to charge a Tesla, the difference in charging times may not make this a good option most of the time.

First, the Tesla owner’s manual says that you shouldn’t use portable generators.

Also, not every generator will work with your Tesla.

If an invalid power source is plugged into the car’s charging system, the car will not let this work.

If you are using a generator with at least 4000 watts of power, it will take most of a 24-hour cycle, if not the whole day, to charge a Tesla to its full capacity.

Can You Charge Any Electric Car with a Portable Generator? 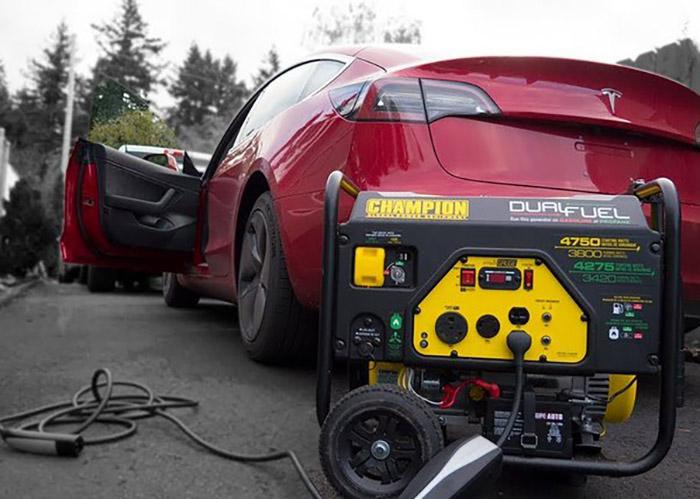 Yes, you can do this, but you have to be very patient, use the right kind of generator and accessories, and take the right safety measures.

One of the biggest problems in these situations is that most small generators don’t make enough power to charge electric cars in a reasonable amount of time, while larger generators designed to power homes are often too big for the job.

But there are some benefits to using a portable generator, even if it takes longer to charge your Tesla.

Aside from the obvious fact that there aren’t as many charging stations as gas stations, they also give you the ability to be self-sufficient if your power grid goes down or if you want to live off the grid.

When you use a portable generator, it will get louder as it charges.

Most portable generators aren’t made to charge electric cars, so yours will have a hard time keeping up with the power needs of your car.

In many cases, generators die while trying to do this, which could cost you hundreds of dollars to replace.

To sum up, you can charge your electric car with a portable generator, but it will take a long time and be less convenient than you thought.

How Many Watts Do You Need to Charge a Tesla?

Since electric cars like Tesla are made to use a lot of power, it makes sense that you will need a lot of watts to charge them properly.

If you aren’t careful, you might buy the first generator you see and assume it will work to charge your Tesla.

If you use a portable generator with 1500 watts or less, we can guarantee that your Tesla will not charge for at least 24 hours, if it does at all.

If you want to charge a Tesla in less than 24 hours, you’ll need a generator that can put out at least 4000 watts.

But since the more watts they have, the bigger they are, you might not be able to find a portable generator that is small enough to fit in the trunk of your Tesla.

But if you do, make sure you can wait around and have enough gas for your generator.

When is a Portable Generator a Practical Option for Charging a Tesla?

Even though we’ve talked about a lot of reasons why it might not be a good idea to use a generator to charge a Tesla, there are times when it is better to use a generator than the other options. This is especially true if your Tesla is almost out of power.

If you spend a lot of time on the road for work, camping, or other trips, having a generator lets you know that you can charge your Tesla even if you are in a remote area.

Also, if you lose power for a long time because of a natural disaster, rolling blackout, or something else, you can still charge your Tesla so you can drive to stores and other places to get the things you and your family need.

Every year, electric cars like Tesla become more and more popular, and we think the demand for generators that make it easier to charge cars faster will grow along with it.

If you have a generator on hand, you’ll have an extra option you can use to charge your Tesla if you need to.