If your car’s alternator is broken, you’re taking a chance if you keep driving it around.

After all, you don’t want to be stuck somewhere with a car that won’t start. Can you drive with a broken alternator? If you do, what will happen? Here’s everything you need to know.

Even if your car’s alternator is starting to act up, you can still get where you need to go. You do this at your own risk, though, because it’s likely that your car won’t start any time soon.

When your car’s alternator starts to break down, the battery will drain much more quickly.

So, even if you know your car’s battery still has a lot of life left, a bad alternator will do everything it can to kill it.

If your alternator has already stopped working, you might be surprised to learn that you can still drive your car, though probably only for a short distance.

Is It Safe to Drive with a Bad Alternator? 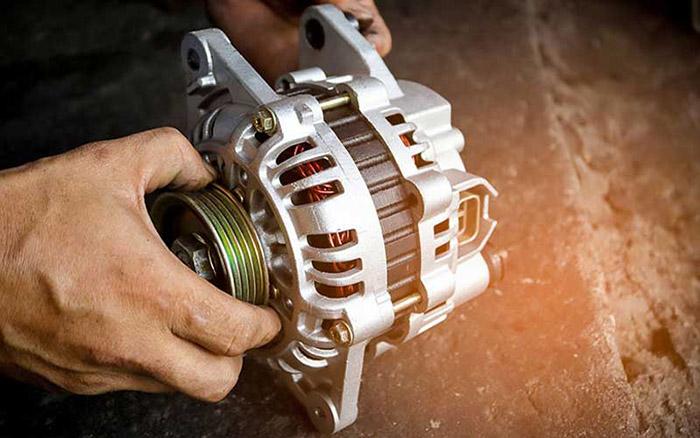 Technically, you can drive your car even if the alternator is broken. But you can only do that as long as your car battery still has power in it.

Once your car’s alternator stops working, all of the car’s systems will have to run on the battery alone. This is why your car’s battery dies so much faster without a working alternator.

Having a bad alternator can lead to other problems that could put you in danger when you’re driving.

First, the engine in your car will become very hard to depend on. This could mean that it is hard to start or that it stops working in the middle of rush hour.

Also, if you drive at night with a bad alternator, you may start to notice that your car’s headlights are getting much dimmer. This makes it harder for you to see and for other drivers to see you.

If your alternator isn’t working right, your dashboard and other electronics in your car might stop working, which won’t be fun when you’re driving.

Last but not least, you can expect your car to start smelling like rubber burning or like chemicals.

If this happens, it usually means that wires are burning or that the alternator belts are getting too hot, which are both likely reasons why the electronics in your car are acting up.

How Long Can You Drive with a Bad Alternator?

The bad news is that there is no clear answer for how many miles you can drive before your car stops running for good if the alternator is broken.

The best answer we can give you is that your car will keep running as long as its battery has power. Keep in mind that if your car doesn’t have an alternator that can recharge the power that is taken from the car battery, the battery becomes the only source of power for your car.

Once your car battery is the only source of power for all of its systems, it will die very quickly.

Your car will stall before you know it, no matter where you are at the time.

If your car’s alternator isn’t working well, you should turn off functions that aren’t necessary for driving. This will help you get the most distance out of your car.

This can mean turning off the air conditioner, the radio, and anything else that isn’t necessary for your car to run. If you do this, you should be able to get your car back home or to a mechanic to be checked out.

Will a Car Still Run with a Bad Alternator?

Yes, your car will still run even if the alternator is broken, but nobody knows for how long.

Depending on how bad your alternator is at the time, you may only be able to drive your car for 30 minutes before it stops and won’t start again.

Most experts agree that you can probably drive your car for up to two hours if the alternator problem just started, your battery has plenty of power, and you turn off all non-essential systems while driving.

One very important thing to remember is that if you need to start your car when the alternator doesn’t work, you must not turn off the engine once the car is running.

Since starting your car takes a lot of power from the battery, there is always a chance that you won’t be able to start your car again in these situations.

How to Tell if an Alternator is Bad

If you think your car’s alternator is starting to go bad, there are a few things you can look for to be sure.

Most of the time, the car battery dies. Since the alternator gives your car’s systems power and also charges the battery, a bad alternator won’t charge the battery as well as it should.

You’ll also smell burning wires or chemicals if the alternator belts are burning or getting too hot.

When you start to notice these smells, you’ll probably also start to hear strange sounds under your hood, like grinding or whistling. If you hear these sounds, it means the bearings in your alternator are worn out.

Since wires may be on fire, this can mess up the electronics in your car.

Because of this, your headlights will either get really dim or really bright, the warning lights on your dashboard may start to go crazy, and you may or may not be able to use your car’s power windows, power locks, sunroof, or other electronic systems.

As a final blow to you and your car, you’ll notice that your car stalls out a lot more than it did before.

If your car keeps stopping and you have to start it over and over, get it going and head straight to your mechanic to have your alternator checked.

When you do need a new alternator for your car, you won’t have to worry that it will cost you thousands of dollars to fix.

This is assuming, of course, that no other parts need to be changed. If you tried to drive as much as you could with a bad alternator or no alternator, your car could have gotten worse. This is especially true if you smelled rubber or chemicals, which could mean that wires or belts were burning.

Most alternator replacements only require changing the serpentine belt, which is a good thing.

What Makes an Alternator Go Bad?

Since the alternator is so important to keeping your car running, you might be curious about why it breaks down in the first place.

Most alternators break down because they are old or have been used a lot. In other words, the more often you drive, the less time your alternator will last.

Another thing that could cause your alternator to stop working is if fluid is leaking onto it.

If you think your alternator is having trouble, you should take your car to a mechanic as soon as possible.

Fixing the problem right away will help you and your car because it could lead to other problems with your car and could put you in danger on the road.

Can You Jumpstart a Car with a Bad Alternator?

Yes, you can jumpstart a car with a bad alternator, and it will probably run long enough to get you home or to the nearest mechanic. But if you leave the jumper cables connected for longer than you need to, you could damage the electronics in your car.

Can I Drive 20 Miles with a Bad Alternator?

Is Radiator Stop Leak Permanent?
How Long Can You Drive With Check Engine Light On
Whining Noise When Accelerating
How To Bypass Reduced Engine Power