Now that summer is here, the grass is getting longer. When you try to start the lawnmower, you find out quickly that it is out of gas. If you are in a pinch, you may wonder if you can use car gas instead of mower gas.

You can use regular or premium unleaded gas in most lawn mower engines, just like you would in your car. The ethanol rating of the gas you put in your lawnmower should be between 87 and 91. To protect your engine, gas for a lawnmower should have about 10% ethanol.

There are a lot of questions about gasoline and what can and can’t be used in a lawnmower or other small engine. We’ve put together some information to help you figure out what kind of gas your lawnmower needs.

How Can I Know if It Is Safe? 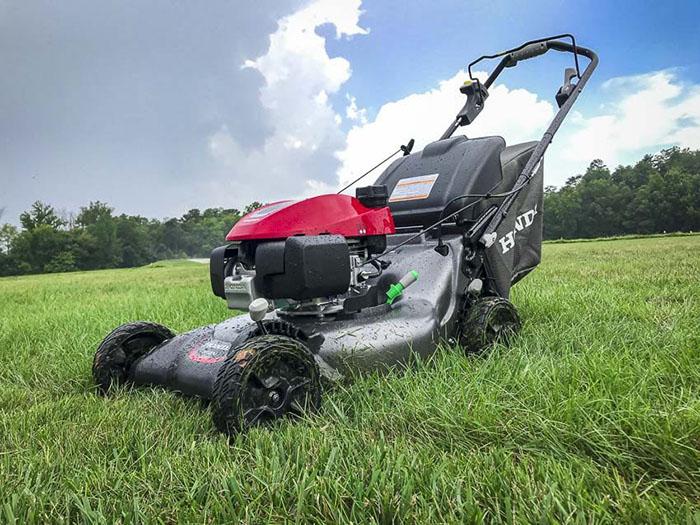 If you filled up your tank at a gas station, you can usually see on the pump how much ethanol is in your gas. This is true for both regular and premium unleaded gas.

As a general rule, if you don’t know what’s in your gas tank, it’s probably not a good idea to put it in your lawnmower.

Gasoline can go bad after about 30 days, which can hurt your lawnmower if you use it. Sometimes it’s hard to tell if this is the case with your gasoline, but there are a few things you can do to find out if it’s still good to use.

You can start by checking how it smells.

Now, watch out! We’re not telling anyone to breathe in the gas directly to see if it’s still good, but it’s fine to take a little sniff. If your gas smells a little bit sour, that’s probably a sign that it’s gone bad.

Pouring some gasoline into a clear container is another way to check the gas. If your gas is darker, like brown or black, it probably has gone bad.

If your gas has been sitting in your garage all winter, it’s probably a safe bet that it’s gone bad. If you want to make sure, though, you can use the methods we talked about above to find out if the gas is safe to use in your lawnmower. Remember that you should always be careful around gasoline, engines, and lawnmowers.

Gas is expensive, and we don’t want to spend more than we have to. However, a couple of gallons of gas will be much cheaper to replace than a brand-new lawnmower. 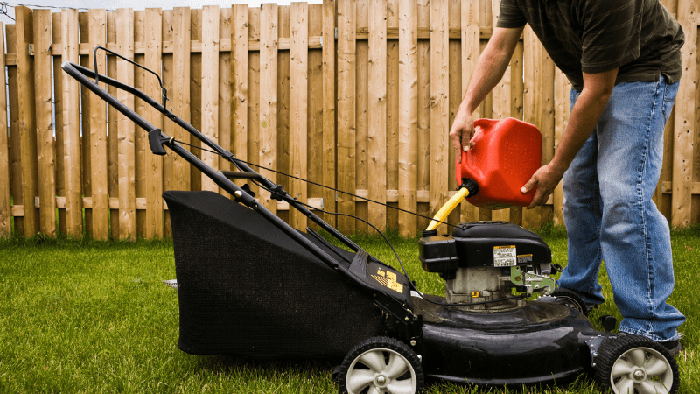 It is very important to know exactly what kind of gas the maker of your lawnmower says you should use in it. Even though we said above that you can use regular gasoline in lawnmower engines, this is usually only true for the most common 4-stroke engines.

If your lawnmower has a two-stroke engine, you will need to do some things differently. You can still use the same kind of gas you would in a car in a 2-stroke engine, but you also have to add some oil to the gas.

You can mix oil and gas yourself, or you can buy it already mixed. Most of the time, the pre-mixed variety has a high markup, but it sure is convenient!

50:1 is the most common gas-to-oil ratio for a 2-stroke engine. You won’t be able to use regular motor oil like you would in your car. Instead, you’ll need to buy oil made for 2-stroke engines.

Some lawnmowers also have engines that only work with gas that is “ethanol-free.” Most likely, you won’t be able to find ethanol-free gas at the gas station near you. You might have to look around a bit, but there are a lot of companies that make gas without ethanol for situations like this.

If you are like the rest of us and threw away the owner’s manual the day you bought the lawnmower, you should be able to find the information you need to fuel your lawnmower by doing a simple Internet search.

When trying to figure out what kind of gas is best for your lawnmower, people often ask if they should use regular or premium unleaded gas. When you first buy a car, you may be told to use premium gas to get the most out of it.

It’s not as important to use premium fuel in a lawnmower or any other small engine. The engine of your lawnmower will not be hurt at all by using premium fuel. In fact, it will work just as well as regular unleaded gasoline.

Premium fuel was made for big, high-performance engines. Some lawnmowers, especially riding ones, have more power, but in general, the engine in your lawnmower is not going to be considered high performance.

There are some small benefits to buying premium gasoline, but in a small engine, it won’t help as much as it would in a much bigger engine (like your car).

Even though premium fuel won’t hurt your lawnmower, it will probably hurt your wallet a little more than regular unleaded fuel.

At the end of the day, it’s up to you to decide whether premium or regular gas is better for you. Either way, your lawnmower will run fine, though.