Getting a rental car for a weekend trip or vacation is a good way to keep your own car from getting too many miles. If you drive less, your car will last longer and your insurance will be less.

Also, if your car isn’t the best, you might not want to drive it on long or difficult roads.

But if you are renting a car in the winter, you need to think about what kind of tyres it has and if you will need chains.

At higher altitudes, there are some places where all vehicles must have chains. You will have to drive with them whether or not you have a rental car.

So, can snow chains be attached to a rental car?

Most car rental companies don’t let you put snow chains on their cars. In fact, doing so could make any insurance you bought for the trip useless, leaving you responsible for any damage that might happen. If the rental company finds out you used snow chains, you could also be fined.

This isn’t the easiest problem to solve, and there are a lot of factors at play. We’ll explain why rental companies don’t let you use snow chains and why you could lose money if you do. 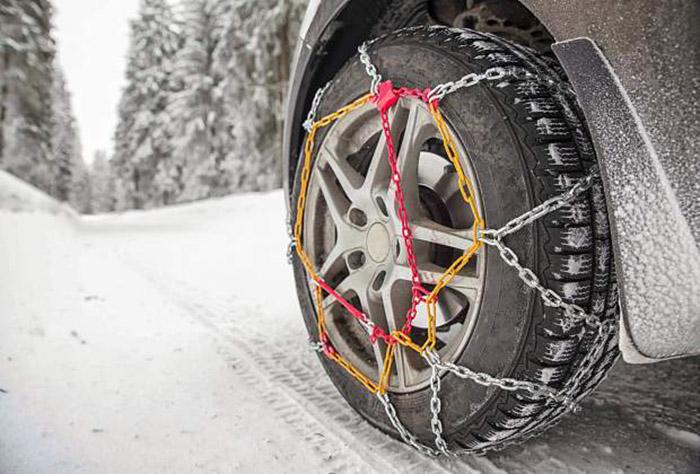 There is a not-so-secret feeling from the rental car companies going on here. Even though they probably won’t tell you this directly, it’s clear that they’d rather not have you drive their cars in bad weather.

Bad weather makes driving more dangerous and makes it more likely that their cars will get damaged. Naturally, more damage to their vehicles raises their business costs.

Their insurance will cover damage to your car, but they don’t want you to drive in bad weather because they know it’s more likely you’ll get into an accident (when possible).

Not Allowing Snow Chains On Their Cars

Most rental companies have rules that say renters can’t use snow chains at all on their cars.

If the tyres or the area around them are damaged, you could be charged for the damage. This is done so that they don’t end up with a broken-down car because you broke their rules.

They are also very strict about checking any damaged areas to make sure customers don’t use snow chains without their knowledge. But if you are caught, for whatever reason, you could be fined and charged heavily.

People who are going to places where there is likely to be at least some snow should get a 4WD car or a 2WD car with all-weather tyres.

But just because you can’t put chains on your rental car doesn’t mean you can’t be stopped in places where chain control is in place.

If this happens, you will have to break your rental contract by putting on chains or taking a different route.

When you rent a car, you pay for rental insurance to cover any damage you might cause while driving.

Accidents can’t always be avoided, but if you don’t have insurance, you might still have to pay for them even if they weren’t your fault. This is why it’s best for people who rent cars to have insurance while they’re driving them.

Some companies won’t let you use the snow chains, and if you break that rule, your insurance could be cancelled.

This is also true if you break any of the rules in the rental agreement, since doing so will make the insurance useless.

But using snow chains can be even riskier because of how likely it is that the chains or the heavy snow will cause an accident or damage.

When driving, if a chain falls off, doesn’t fit right, or breaks, it could do a lot of damage to the car.

And because snow chains often leave marks on the tyres, it’s easy to see that they were the cause.

What About Winter Packages?

It might be confusing that rental car companies don’t want you to use snow chains but offer ski racks as an extra option for winter trips.

Why would they give you this but tell you that you can’t drive with snow chains?

Well, you don’t usually need snow chains when the weather is bad.

Most of the time, 2WD with all-weather tyres or 4WD with snow and mud tyres are all you need to be safe. Both of these combinations will help you stay on your feet on ice and snow.

If you need snow chains where you are, it means that the snowstorm is very bad or that the road is very hard to drive on in the snow.

Most of the time, these safety rules are put in place on roads that lead up into the mountains and have a lot of twists and turns.

Even if you buy a winter package for a trip with your family in the winter, don’t expect to be able to put chains on your tyres. And if you do, you should know that you are taking a big chance.

If you bring snow chains for the car and end up in a place that requires them, or if you just want more protection while driving in the snow, you are breaking the rental policy.

If the company finds chain marks or small spots of damage around the tyres, this could end up costing you a lot of money at the end of the trip.

Whether the company makes you pay for the damage, gives you a fine for using snow chains on the car, or cancels your insurance, you may have to pay a lot of money.

Any damage, no matter how small, must be paid for out of pocket.

And if you break a rule in the rental agreement and cause a major accident, you will probably have to pay for the whole car.

When driving in the snow, the chance of an accident is higher, so you are taking a huge risk by using the snow chains, which voids the insurance and breaks a rule in the rental agreement.

If you don’t follow the rental policy, you’ll have to pay the money back and probably have to pay for other damages, like damage to another vehicle or property.

So, if you want to put snow chains on your car and break the deal, you should think about it first. You shouldn’t take these risks, and if you do, you could end up in a bad situation.

Putting chains on a rental car is also confusing because some online reservation services will give you the option to add snow chains to your vehicle, even if the rental company doesn’t allow them.

This can make the whole situation much more frustrating because you might think you won’t be able to put snow chains on your car until you’re already on the road.

When you get to the rental place, they’ll tell you that snow chains aren’t allowed. This could make it hard for you and your family to go on your trip or stop you from going.

The rental companies don’t have to keep these reservations, and they won’t if they don’t let you bring snow chains. You might be stuck with a car you can’t use or a reservation you don’t want anymore.

In either case, this is not a good way to start a vacation.

So, know that most rental companies won’t let you use snow chains, and if the reservation service shows a snow chain add-on, you should double-check with the rental company.

This will clear up any confusion right away, so if you need to, you can change your plans.

Even though it would be great for some trips to have snow chains on the tyres of your rental car, it is much more likely that you won’t be able to use them at all.

If you want to keep going on your trip as planned, it might be best to have a backup plan or be able to switch to a 4WD with all-weather tyres.

But if you still want to use snow chains, you should know the risks and costs. So, decide if you will follow the rules of the rental car contract or pay for it.