Can Your Car Get Towed For Expired Tags Updated 02/2023

Paying for your car’s tags every year is a cost that every car owner has to deal with. It happens every year around the same time, and you know you have to pay for it.

But what if you forget to pay it or don’t have the money? People who haven’t paid for their registration tags may wonder if the car they need to get to work can be towed away.

It’s not unusual to see a few cars on the road with tags that have expired. This could make it look like it’s okay to drive without paying for and having current tags. Well, it might seem like that, but that’s not really the case.

So, if my tags have run out, can my car be towed?

If your registration is more than six months late, your car could be towed. But there are things that could make this less likely to happen, such as mitigating circumstances and officer discretion.

To avoid problems, you should pay for your tags every year. If you don’t, you could get a fine or have your car towed. But the details of your case can be different depending on a few different things.

We’ll talk about what makes each case unique and why some people get their cars towed and others don’t.

What Does The Law Say About Expired Tags? 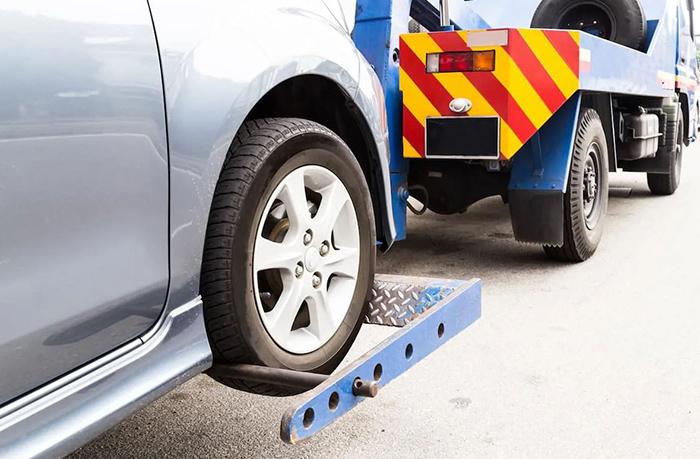 Officially, state vehicle codes do say that if your car’s registration is more than six months late, it can be towed away.

This may seem vague, which could make you think that your car can be towed away at any time from anywhere…

But that’s not completely right.

This code says that your car can be towed if it is found parked on the street or on public land. A peace officer or city or state employee who enforces parking rules can call a towing company to take your car away.

Even though this is getting more specific, the code also says that only a peace officer can have the car towed if you are in it.

1. It Depends on the Situation

What happens with the car could also depend on how the officer reacts and what the person says to them.

For instance, someone might have paid for their tags but not yet gotten them.

If the driver has proof of purchase, like a receipt or an email about a transaction, they will probably be let go with no ticket or fine at all.

This is because the tags can take a while to get to a person after they pay, so the officer may let the person go without even a warning.

If the driver was stopped for something else, like speeding, the expired tags will just be added to the ticket.

2. What If You Aren’t Present?

The law is also different depending on whether or not you are in the car at the time. This could happen if you are found driving the car, but what if you are not in the car?

Well, if your car is parked on public property and its tags have expired, a peace officer or parking enforcement officer could tow it away. This only happens if the tags have been overdue for more than six months.

If your tags have just run out or are late by less than six months, a ticket may be written and left on your car.

This is often done to make sure the person remembers to pay it before the six-month mark, when your car could be towed.

3. What If Your Car Is Parked On Private Property?

The law says that a car with tags that have been expired for more than six months can only be towed if it is on public land or the street.

This is different from when the car is parked on someone’s private property.

So, what happens if you park your car in your driveway and don’t drive it?

Well, because it’s on private property, parking officers won’t be able to do anything about it. Anything outside of their specific area of authority, like a certain parking lot or garage, is not their responsibility.

But because you are on private property, police won’t give you a ticket or tow your car. Only driving the car is against the law, so nothing will be done.

What About Officer Discretion

If a police officer pulls you over, the situation can turn out very differently depending on how the officer acts.

Some officers won’t give you a ticket. Instead, they’ll just give you a warning, hoping that you’ll pay for your tags soon after getting pulled over.

If other officers see your car parked, they may not think twice about giving you a ticket or having your car towed. So, why do police officers act in different ways?

Some police departments will have their own rules about when and where their officers can enforce these laws. Also, some places won’t give tickets to people who have never been late before.

These rules are put in place so that people who can’t pay their registration but still need their car won’t be put in a bad situation that could make their situation worse.

Officers may let a driver go to work if they see that they are worried about making the payment.

When the officer sees that the person has paid, he or she might let them go with a warning to pay for the tags sooner so that they can be sent to the person before they need them.

People who pay late for the first time are often treated less harshly because they haven’t been late before.

But why do we have to follow these rules?

Well, we’ll talk about the two biggest reasons below.

The law is stricter than the rules that officers have to follow to enforce it, which might be confusing to some people because it seems to go against common sense. But one of the reasons this is done is because the agency doesn’t want to be too strict.

Officers can give tickets to anyone they want, so they can choose who they want to warn. This gives them the freedom to give a break to someone they see who needs one.

This helps people who are having trouble with money and couldn’t pay the registration fee but still need their car.

If a police officer sees this, they can warn them and give them more time to pay for their tags before giving them a ticket.

If officers didn’t have this, they would have to give each person they saw a ticket. This could make things harder for people who were already having trouble, which is not what the law is supposed to do.

Officers could go around and write tickets for every expired tag they see, which might make more problems than it solves.

Officers have to follow the law too, and how they act on the job is important. The rules that have been put in place are also meant to keep officers from getting sued when they make mistakes.

Officers who are too eager or who are new to the job could make the mistake of giving a ticket to someone they shouldn’t have or who other officers wouldn’t have.

This could make things hard for the agency if that person decides to sue it.

When mistakes happen on the job, people who are unhappy with the service can sue the agency. But if there are rules that make it harder to make a mistake big enough to sue over, then the chances of this happening are much lower.

Other Reasons For Not Ticketing or Towing

If a peace officer decides not to give someone a ticket or tow their car, it could be because of something personal or related to their job.

But sometimes things aren’t that complicated.

Peace officers have a set time to be back at the station at the end of their shift, just like everyone else. This means that they don’t always have time to write the ticket and get back to the station in time to switch shifts with the next officer.

Officers may not write the ticket or have the car towed because their shift is almost over and doing so would make them stay on the job longer than they were supposed to.

And if they don’t, you might just have been lucky. But you shouldn’t think that this is a common thing to happen.

Final thoughts on getting towed for expired tags

It’s important to know that if you don’t have the right tags and your car is more than six months late, you could get your car towed. However, from what we’ve talked about, it’s clear that this doesn’t mean you will definitely get your car towed.

You could get a warning or citation instead for many reasons.

But keep in mind that if you drive with expired tags, you could still get a ticket and have your car towed.

Simple Green Vs Purple Power
Worst Best Mini Coopers Years What Year Mini Cooper Should Be Avoided
Torque Wrench For Spark Plugs
How Long Can Radiator Flush Be Left In?