I bet you’re a bit like me in that you don’t like it when your car smells. Have you ever driven a car that smelled like rotten eggs?

I have been a victim of this more than once. I had to follow my nose to find out where the smell was coming from. Here are the most common reasons why it stinks and what to do about it. 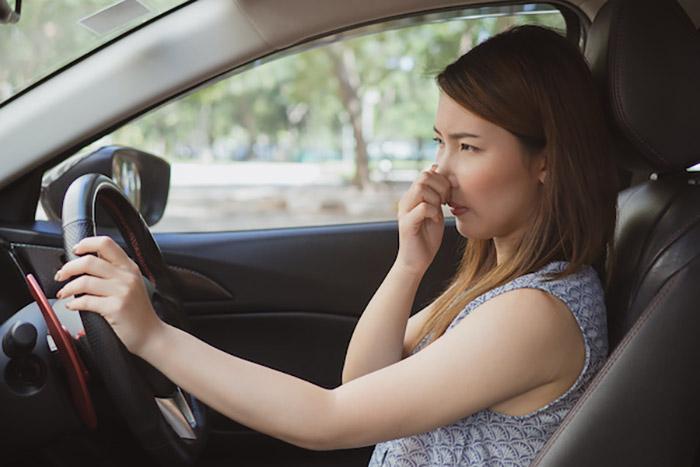 There are a few things that could be going on if you smell rotten eggs in your car while it is running. But a broken catalytic converter is the most likely cause.

Here, gases like hydrogen sulphide are changed into sulphur dioxide, which is safe and has no smell.

When this system for releasing gases doesn’t work right, hydrogen sulphide won’t be turned into odourless sulphur dioxide. This means that the car will release hydrogen sulphide, which smells like rotten eggs.

The only way to fix this problem is to put in a new catalytic converter. Even though spending the money to replace it isn’t fun, at least your car won’t smell anymore.

It’s also important to point out that driving a car with a broken catalytic converter is dangerous. This is because it will cause the exhaust system to get hotter.

If the weather is hot, your car is likely to catch fire.

This should be carefully checked at the service shop to make sure that the new catalytic converter won’t break.

If the fuel pressure sensor stops working, the catalytic converter can sometimes stop working. The sensor tells the system where the fuel should go.

I have been in situations where the catalytic converter got clogged up by too much oil because it wasn’t regulated properly.

This would make the exhaust system not work right. So, the toxic gases won’t be turned into something useful. The car will smell like rotten eggs because of this. 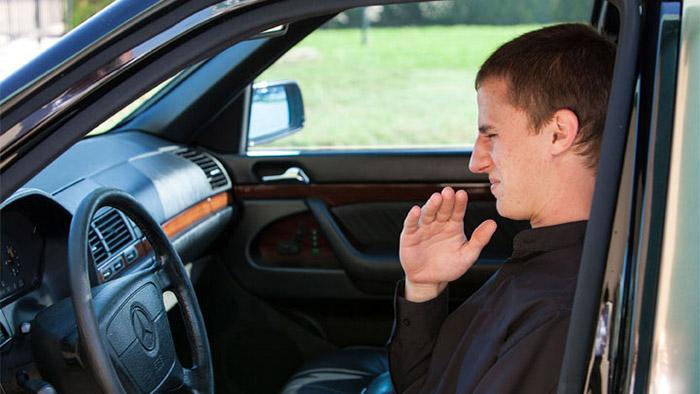 After a while, it can get stale and leak into other parts of your car, making it smell bad.

Before I take my car in for a full diagnosis of its emission system, I would make sure I didn’t leave any food under the seats or in any hidden pockets.

If my car still smells like rotten eggs after a thorough check inside, I go get it checked out under the hood.

There is nothing worse than being around someone for a long time who smells bad or smells very strong. It can be annoying when your car smells bad, especially if it smells like rotten eggs.

If this happens, your engine needs to be checked.

How to Fix Rotten Egg Smell in Your Car

If your car smells like rotten eggs, you should replace the broken part that is causing the smell. Whether the problem is with the catalytic converter, the fuel pressure sensor, or the transmission fluid, you need to fix it right away.

The smell of rotten eggs will go away once the parts are fixed. It is important to know if the smell could be coming from anywhere else. Other things that can cause a strong smell are a broken engine, fluid leaks, or worn-out brake pads.

When this happens, you should get help from a professional mechanic to figure out what’s wrong and fix your car. If you drive your car in this condition, it could damage other parts. Also, driving with a lot of sulphur in the car is bad for your health.

For the fuel pressure sensor, the problem can be fixed by replacing it. This will also keep sulphur deposits from making the catalytic converter hard to work. If the sensor is working well, the fuel filter is the next part to check.

In the same way that a broken sensor can cause problems, a broken filter can cause the system to get clogged up. So, the filter needs to be changed all the way through.

What else can cause the cabin to smell bad?

Sulfur from the engine can make the car smell like rotten eggs, but it can also smell like burning rubber or worn-out brake pads. This can sometimes be seen or smelled inside the cabin by smoke or a bad smell. You can fix this by looking under the hood for loose belts and checking the soles of the brake pads.

Molds, fungi, bacteria, and other small living things can also make your car smell bad. Bacteria often grow behind the dashboard panel of the evaporator. Because of this, the air conditioner smells bad.

What makes the air conditioner smell like rotten eggs when turned on?

Most of the time, this is caused by a broken catalytic converter. This part is what changes the smelly hydrogen sulphide into the harmless and odourless sulphur dioxide.

If this doesn’t happen because of a problem, the cabin may smell when the AC is turned on.

Another reason could be that bacteria, fungi, or other tiny organisms have grown on the AC vents. When they break down over a long period of time, they usually smell like rotten eggs.

Will I see a light signal on the dashboard when the catalytic converter is faulty?

Yes. The catalytic converter is one of the main things that can make the “check engine” light flash on the dashboard. When this happens, the converter needs to be replaced right away to keep the engine from getting worse.

It’s best to have your catalytic converter checked when you get your car serviced regularly. This will help you figure out which part is broken before it fails completely and starts to smell bad.

Can I drive with a faulty catalytic converter? If yes, for how long?

But you should get the car checked out as soon as you notice that the catalytic converter isn’t working right. Sulfur in the cabin is bad for the health of the people who live there.

When the engine runs too long or uses too much oil, it can burn through the fibres in the catalytic converter. If you drive your car faster at this point, it might start to smoke. Through the vents, the smoke will get into the cabin.

Before you take your car to a mechanic to get it checked out, you should make sure that the smell isn’t coming from rotten fruit or food in the car. Check the inside of your car, especially under the seats, to do this.

If this doesn’t work, you can take your car to get the catalytic converter and transmission oil checked out.