How does the alternator work?

The auxiliary belt transports power from the thermal motor to the alternator. Electricity consumption might peak at 1.72 kW, depending on the car’s electronic systems. This energy must be produced by the alternator, which must also be able to recharge the battery.

A car’s battery powers both its electric users and its motor when the engine is started (starter). The alternator assumes the duty of a power source for consumers, while simultaneously charging the battery, after the engine is self-sufficient.

There are two separate coils in the alternator: an exterior fixed coil and a rotary one inside. Mechanics may refer to the first one as a stator and the second as a rotor if the alternator is malfunctioning and the car is taken to a service center.

Alternating current is generated in the fixed coil of the stator when the engine of your car is operating, which is powered by a belt. As a result, the alternator diodes convert the alternating current to direct current (DC). Yes, the voltage regulator does have a maximum output voltage. Faults in the voltage regulator are just one of several possible causes of alternator failures. 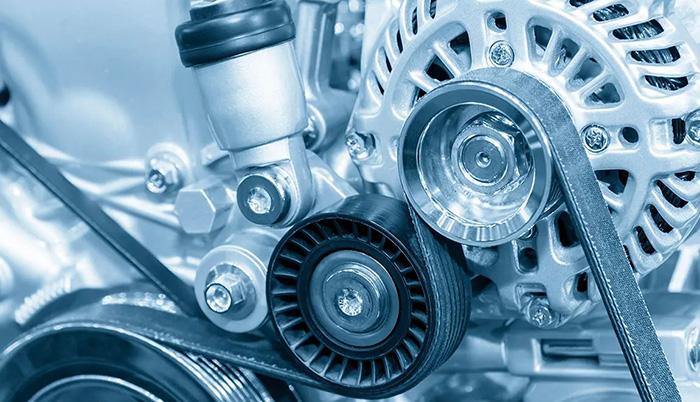 The alternator, along with the battery and the voltage regulator, is the heart of the vehicle’s charging system. It is simplest to replace your car’s alternator when it fails because it not only charges your battery but also powers everything else in your vehicle’s electrical system, including the lights, AC system, ECU, and stereo. The car will display some clear indicators if the alternator fails.

1. Battery light in the dashboard

When it detects a contact, it will typically illuminate, but it will go dark once the engine is running. The alternator or other sections of the charging system may have a problem if the light stays on for an extended period of time. Even though this might suggest that the alternator isn’t working, it’s just a general indicator.

2. The engine has a burning odor.

3. Strange sounds coming from the engine

Your car’s engine may have a different sound if the alternator is malfunctioning. Car service should be performed if you notice that the car is no longer running smoothly but making blocked noises, as the alternator may be showing indications of fatigue.

4. Fluctuations in headlights and lights.

It’s not uncommon for the car’s lights to fluctuate while the alternator is malfunctioning, especially when the engine is idling.

5. The car does not start

If the automobile won’t start, the alternator is likely to blame, and a replacement is in need. Get to it as soon as possible before the battery runs out!

6. The battery is draining

You need to replace the alternator if the automobile battery is in good condition but is draining.

Other indications point to a faulty alternator. As a result, electrically operated windows can no longer be closed or opened. In addition, the engine begins to run quite slowly. If the alternator or battery fails, it could be because it is drained or too morally worn. A thorough examination of each component is required to determine which is faulty in this instance.

How do we check the load level of the alternator? 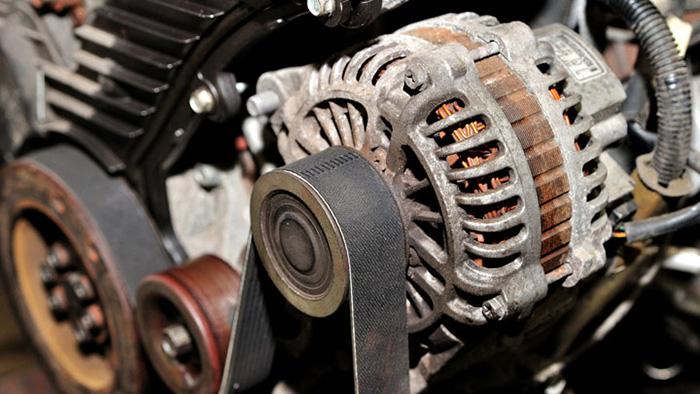 You can use a multimeter or a voltmeter to examine if the machine alternator is working relatively simply. You’ll compare the findings of the alternator measurement with the default values for the device.

The steps to be taken are the following.

To begin, locate your car’s alternator and then double-check that all of the belts are securely fastened.

Start the engine after setting the measuring device to 20 V. Using a multimeter, connect the positive clamp to the alternator’s red wire, and the negative clamp to a metal object in the car, such as a screw from that region or the negative terminal of the car battery. If the transmission wheel and belt are functioning normally, this is the next step.

The alternator should not be touched with any of the clips.

The regulator may be defective if it reads higher than 15 volts on the voltmeter or multimeter. If the readings from the measuring instrument go below 13. 5 volts, there are numerous possibilities. In order for the alternator to work correctly, the engine must be run at a rev limit of 2 000 revolutions per minute or the alternator connectors must be too tight. In any case, this prevents the transmission wheel and belts from rotating properly.

To put it simply, a 12V automotive battery requires a 14V alternator to be charged. Because the alternator can’t operate at maximum power if the battery is almost fully charged, the alternator must be examined first.

To check the battery, turn on the headlights for 10 to 15 minutes while the engine is off to allow the battery to use some energy, which can then be measured to see how much power the alternator creates to make up for the lost power. The Meter will show 12 13V if the battery is fully charged (when the engine is not started). If, after a lengthy period of driving, the gauge reads between 13 and 14 volts, but immediately decreases to less than 12 volts after the engine is shut off, it’s time to get a new battery.

Before you can get a new alternator, you must first remove the old one from the vehicle. Variables such as revolutions per minute (rpm), pole count (p), the way the alternator is put together (rotors), and coil type are available on the market.

After the alternator has been ordered, the specialist must order it in accordance with the automobile book’s specifications. Because of the alternator’s sensitivity, it is critical that the vehicle be towed to a reputable repair shop for the task of mounting the generator.

It’s common to measure the alternator’s output voltages once it’s been installed, and to compare them to the car battery’s voltage after the transmission belt has been checked and installed.

A new alternator can be properly installed if these specifications are met, and if not, a few minor adjustments must be made. The battery control must be re-checked when the new alternator is installed. If the answer is yes, then there is an issue, and the alternator has been successfully replaced if the witness is turned off.

However, you must first ensure that the battery is completely charged and the alternator is in good operating order before attempting to replace it. Before you replace this part, you must make sure that everything is in order.

In addition to the price of the alternator, expect to pay between $200 and $300 for labor.

New Toyota Fortuner Launched Rs 25.92 Lakhs
How To Gap Spark Plugs Without Tool
What Beams To Use In Fog
Are You Allowed To Have Tinted Windshield And Windows In Florida?