Car Overheats In Traffic Not On Highway Updated 01/2023

Does your car overheat while driving in stop and go traffic but not when driving on the highways? These codes indicate a problem in the engine compartment.

The most common source of this problem is a malfunctioning fan. As opposed to on the freeway, my car overheats in traffic. This can be caused by a malfunctioning radiator fan, an issue with the coolant or a thermostat valve or drive belt problem. We’ll take a closer look at each of them below.

Despite the fact that a malfunctioning fan could be the cause of your car’s overheating when it’s idling, the actual cause of the faulty fan will vary based on a number of different variables.

Why Does My Car Overheats in Traffic Not on Highway? 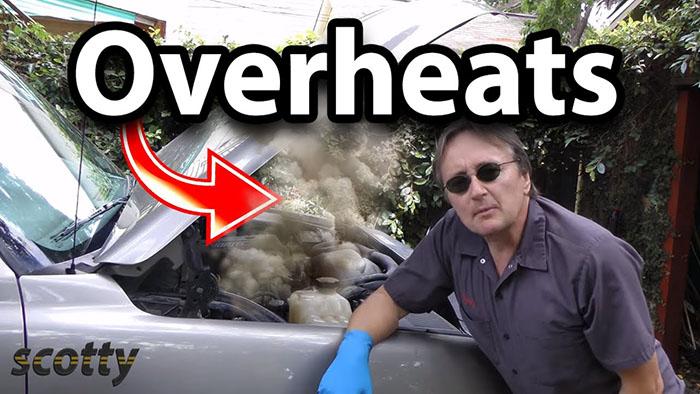 This question has three parts to it, and we’ll address each of them in turn.

Your automobile will overheat if the fan does not rotate while it is running to help keep the radiator cold.

Driving at highway speeds, the wind will force air into the engine compartment, which will trigger the fan to operate automatically and keep your motor cool.

However, when your speed decreases, so does the volume of air entering the engine bay. So the fan must suck outside air to keep the engine from overheating.

You may notice a sudden change in the temperature gauge reading from green to red if the fan isn’t working at this point.

However, you might wonder what caused the radiator fan to stop working in the first place. The cause for this may vary depending on the make and model of the car, as well as how it is driven. But in general, the radiator fan may have ceased working because of an electrical or physical problem.

Check the radiator fan if you observe this problem (vehicle overheating in traffic rather than on the highways). It’s best to take your car to a repair shop authorized by the manufacturer if it’s still under warranty.

Is it possible to tell if the radiator fan is running or not? After opening the hood and turning on your automobile’s engine, the fan should begin to spin instantly.

A lack of rotation or spinning could be the problem. However, if the fan is functional, the following are plausible causes of overheating in stop-and-go traffic.

You should be aware that the coolant liquid or antifreeze (as some people refer to it) plays a critical role in maintaining your car at a reasonable temperature. You could be the cause of your car’s overheating if you didn’t fill the coolant reservoir to the recommended level (which means you poured too little into the reservoir).

Your speed is sufficient on roads to blast a tremendous volume of air into the engine compartment and keep it cool. It’s only when you’re at a standstill or slowing down that a car’s coolant is used up.

The improper coolant liquid can also cause overheating and catastrophic damage, just as it does when the coolant isn’t filled to the expected level.

The first thing you should do if you discover that your automobile is overheating is to check the coolant level and, if necessary, refill it. As an example, if the coolant reservoir is nearly full, but the overheating problem was caused by something else, you can be sure that you used the correct coolant liquid.

Before moving on to the next step, make sure you check the radiator fan (explained below).

There are two possibilities as to why your automobile is overheating in stop and go traffic but not on the freeway. By allowing coolant to enter the engine when it’s too hot, the thermostat valve regulates the temperature within the engine.

It’s possible that your engine’s temperature control is off because of a faulty thermostat valve, which could be the cause of your issue. A new valve must be installed right away if this is the case.

As with the drive belt, a faulty/damaged drive belt can cause a vehicle to overheat. It may be necessary for you to do so.

We can’t ignore the problem of excessive heat. A great deal of money could be lost as a result. At the first sign of overheating, you should take immediate action to prevent further damage.

It’s also worth mentioning that your automobile could be overheating for a variety of other causes. These are just the most popular.

Next time someone asks why their car overheats in traffic rather than on the freeway, you’ll know what to say. Let them know that these possible causes are out there.

It’s also a good idea to have a mechanic check your automobile out if any of the aforementioned factors don’t seem to be the root cause.

10th Gen Accord Honda Unveil July
What Happens If You Inhale Motor Oil?
What Causes Transmission Problems After Cv Joint Replacement
How To Check Freon Levels In Car