In engines, carbon buildup is a typical problem caused by both natural wear of the engine parts and human error, such as the use of subpar oil or fuel. So, even if the engine is brand new, it’s better to look for these soot deposits to avoid worse problems in the future.

To avoid engine failure, it is important to keep an eye on carbon buildups and coking in the engine.

What are the causes of carbon buildup in cylinders?

When low-quality gasoline and leaking oil from under the piston rings or valve stem seals are burned, they produce carbon deposits in the engine cylinders. It’s because of this:

Deposits on various areas of the piston are the most dangerous to the engine. Valves can also become clogged with debris. Carburetor detonation and severe damage can occur as a result of carbon deposits soaking up fuel.

The wear of the cylinder is accelerated by soot on the piston’s side surface and on the compression rings. Toxic buildup in the oil drain channels is not only a safety hazard, but it can also cause harm to the engine’s internal components.

In the first place, deposits will reduce ring movement, which will contribute to a decrease in oil consumption. Furthermore, if there is no clearance between piston groove and ring and pressure is applied to the cylinder walls, the liners wear out. 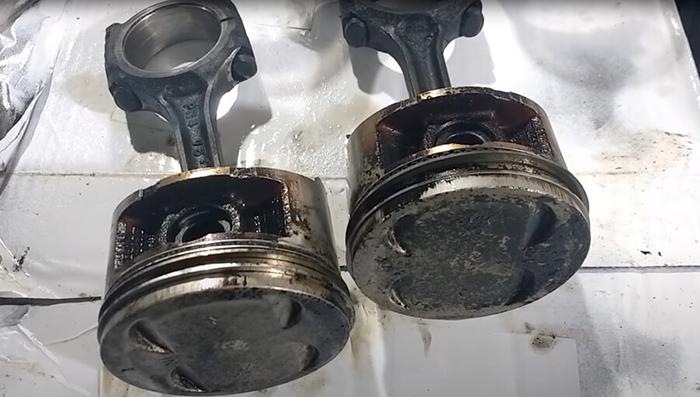 Over time, deposits on these rings might cause them to move more slowly and with less power. Due to the wear and tear on the piston group, the cylinders will lose their ability to compress. Deposits build up in the rings over time, reducing their ability to function properly.

Piston rings can often be seen to have built-up deposits.

When you notice an increase in oil consumption and blue smoke from the exhaust, it’s best to begin cleaning the pistons and piston rings.

Compression problems can be remedied with a thorough piston cleaning. You can use a cylinder compression tester to see if the compression is adequate..

To avoid having to replace the piston entirely due to excessive wear on its components, be aware that scrubbing the deposits will do little good if the wear is severe enough.

There is a direct link between deposits and the direct contact between fuel and hot surfaces. The ensuing carbon deposits coat the combustion chamber walls and obstruct the removal of heat from the cylinder components. They are a problem. This will cause further damage, such as a burnout valve and a bent piston, a premature ignition of the fuel mixture, leading to a change in geometry and the ultimate destruction of the piston.

As a result of buildups, the engine’s power output is reduced.

How to remove carbon buildup from pistons and cylinders 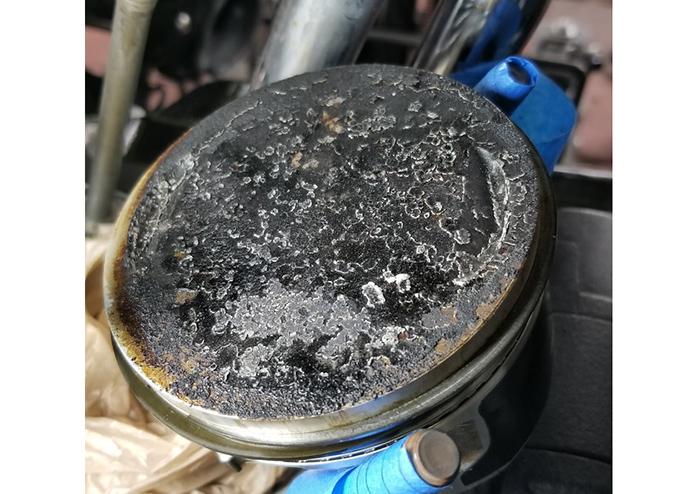 It is possible to remove accumulated deposits from pistons using a variety of techniques.

You can do an engine flush, which requires the engine to be dismantled and cleaned with a solvent by properly experienced staff. However, if the person does this incorrectly, this could cause serious damage to the engine.

Additionally, specific additives can be added to the gasoline and used to remove deposits from the engine’s various components before being expelled through the exhaust system. There are certain drawbacks to this approach.

Engine de-carbonization is an option, as well. Cleans the entire engine, including the O2 sensor and catalytic converter of deposits, improves engine performance, reduces noise and vibrations, and restores fuel efficiency using this unique way of removing carbon. A failure to try this approach is still possible.

When should you clean the engine and pistons from carbon deposits?

Because of improper engine care, carbon buildups begin to emerge before they should. Engine oil and fuel that are of the highest quality might help slow this process down. It’s usually advisable to go to a specialized workshop with skilled employees that removes engines and performs a thorough cleaning of the engine and its parts from carbon buildup.

Are Dodge Chargers Reliable
New Hampshire Tint Laws That You Should Know
Top 10 Cars With Butterfly Doors That You Need Know
What Is A Group 35 Battery?