When carbon deposits form on the valves of your engine, it loses power, becomes unstable, and in extreme situations, can even damage the fuel distribution system as a whole.

Carbon deposits are more likely to form in gasoline engines, particularly MPIs and GDIs (gasoline direct injection systems). The possibilities of carbon deposits forming in GDIs are higher than in MPIs.

What do engine valves do? 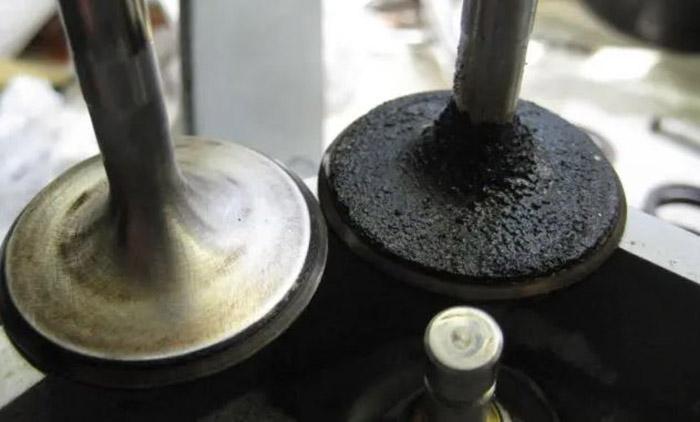 For the sake of clarity, we’ll briefly review the functions of valves before diving into why carbon deposits build on them.

As a result, valves play a crucial function in preventing the fuel air mixture from escaping from the combustion chamber. There are two parts to the engine that work hand in hand: the valves that open and close and the pistons.

Why is carbon building up on valves?

To begin with, carbon buildup on valves is normal due to the way engines work, so don’t panic. The speed of this process depends on the age of the engine, how often you drive the vehicle, and how well you maintain it.

Second, a malfunction, particularly one in the timing system, might lead to carbon buildup. Valve seals can become clogged with carbon deposits if oil runs through them. Carbon buildups on valves will form as a result of this process.

When using an MPI engine, for example, the gasoline is fed into the intake manifold and mixed with air before being sent to the engine’s cylinders for burning. This is because the valves are rinsing and no carbon deposits are generated because the mixture of air and fuel just pushed the carbon away.

Direct injection systems, on the other hand, are more prone to carbon buildup on the valves. Even though GDI engines are more recent than MPI engines, a major disadvantage of these engines is the buildup of carbon on their valves due to the fact that the injector is located directly in the cylinder block and clean air is supplied through the intake manifold, resulting in an air fuel mixture in the engine cylinder itself.

A deposit of fuel builds on the valve body as a result of the fuel being fed to the cylinders without the valves being opened.

What are the reasons for carbon buildup on valves?

There are more reasons why carbon builds up on valves, such as age and time passing, because it’s normal that an older engine and more mileage it has, the more likely it is that such deposits will occur.

What are the symptoms of carbon buildups on the valves? 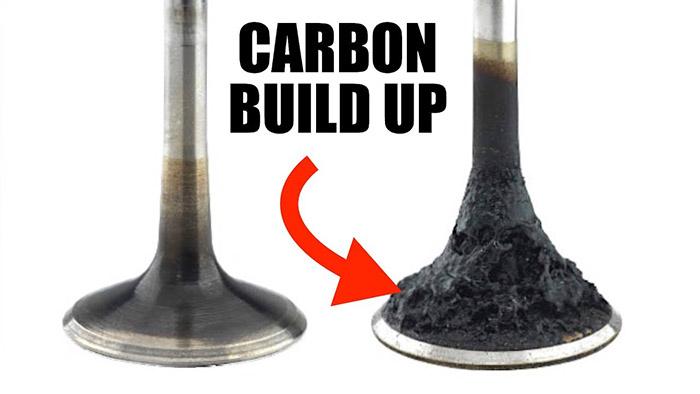 Loss of engine performance. If the automobile is loaded down with luggage and you’re driving up a hill, you’ll notice a decrease in power. A decrease of engine power is apparent there, which could be the result of this issue. Idling at a constant tempo. RPM will be extremely low and even float as a result of the engine running on insufficient air for the air-fuel mixture at idle. This can lead to an engine halt. When you step on the gas, the automobile jolts. Due to deposits on the valves, there is less air in the engine than typical. A clogged valve is the source of this problem. The valve can jam if there are excessive buildups everywhere, causing the engine to run with only one cylinder. Valve-to-piston contact is also a possibility, which could result in costly repairs. Cooling has been reduced. The cooling of the combustion chamber will be affected by these deposits. A hot engine puts a lot of strain on the cooling system, and the coolant can mix with the engine’s oil, which can lead to even worse problems. Blown-out valve. The engine’s compression value decreases as a result of a reduction in power. The burning air-fuel mixture bends the valves when the engine is driven in this manner in a depressurized chamber at the instant of ignition, eventually leading to valve burnout and catastrophic failure.

How carbon buildups on valves are removed?

Carbon deposits on valves should be removed from GDI engines on a regular basis. You don’t have to wait for the buildup to be critical before doing this. With or without removing the intake manifold, there are two techniques to remove the deposits from the valves.

If the intake is not removed, you may be able to get by with the use of specialized goods. Moreover, if you remove the intake, you should do so in a shop that has the proper tools.

Using specialized carbon cleaners can assist remove a tiny quantity of deposits, but these chemicals are best used as preventive measures. It’s pointless to use these items to remove carbon deposits if the buildup is so extensive that you’ll need a professional service.

Recommended products for cleaning the carbon buildups on valves

Soot, deposits, and carbon buildup on valves may all be removed using this product, which can be used on turbocharged engines.

GDI engines, which are more prone to carbon buildup on the valves, benefit from the usage of this cleaner. It does an excellent job of cleaning the entire power system, not just the valves. Any GDI engine, turbocharged or not, can be used with this kit.

How to prevent carbon buildup on valves?

Valve deposits can be prevented by regularly inspecting the valves for carbon buildups and acting before the soot layer becomes difficult to remove.

Even a total engine failure or expensive repairs could result from carbon accumulation on valves if this problem isn’t addressed in a timely manner.

Carbon deposits should be checked for and, if feasible, removed on a regular basis. It’s also a good idea to use special additives, since their primary goal is to prevent carbon deposits from forming.

Airbag Replacement Cost
How Much Can An Expedition Tow
Clicking Noise When I Try To Start Car
What Is The Spark Plug Gap For Chevy 350?