If you own a Tesla, it’s likely that you care about the environment. After all, driving an electric car like the Tesla is one of the best ways to cut down on your own carbon footprint. If you have invested in other forms of clean energy, like solar panels, you may be wondering if you can use your solar panels to charge your Tesla.

But can a Tesla really be charged by solar panels?

Solar panels can, in fact, be used to power up a Tesla. When a home has five solar panels, an inverter, and an electric vehicle charger, a Tesla can be charged up to 40 miles.

Now that we know solar panels can be used to charge a Tesla, we’ll look into how easy it is, how much it costs, and other things that Tesla owners who want to go green will care about.

How Many Solar Panels Does it Take to Charge a Tesla? 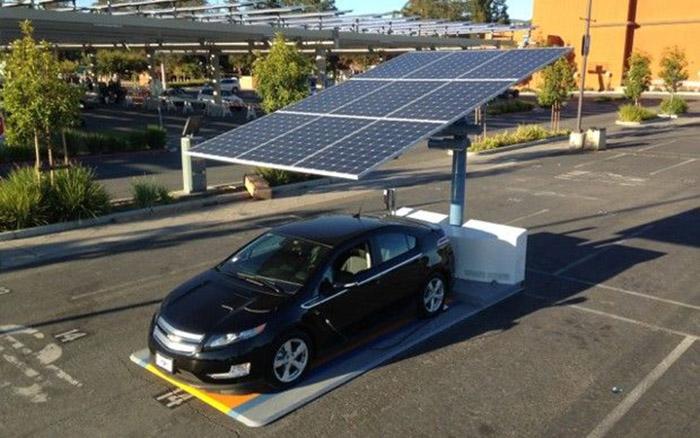 Five solar panels at a home will be enough to charge a Tesla so that it can go at least 40 miles before it needs to be charged again.

Some homeowners might worry that using their solar panels to charge their Tesla will take energy away from their appliances and other things, but this is not the case.

Since solar energy is a renewable source of energy, there is no problem with having enough power to charge a Tesla and keep everything in a home running.

Also, just like the Tesla, solar panels come with warranties that say they will last for many years.

Solar panels installed on a home will last at least 25 years on average. This means that a Tesla can get a lot of energy from them.

People who own Teslas and have solar panels on their homes often wonder if they will also need a home solar battery to store the energy they need to charge their Tesla.

Most of the time, this is neither useful nor needed.

Since the car’s battery rarely needs to be fully charged in one session, there is no need for a solar battery.

Let’s take a look at the Tesla Model 3 to show this.

With batteries that range from 54 to 82 kWh, a home would need as many as six Powerwalls to store enough energy for the car’s battery.

This would be on top of the cost of the car and the installation of solar panels on the house. It would cost at least $30,000 or more.

The net metering benefits that Tesla owners usually get for having an electric car are another reason why they don’t need a solar battery.

By getting credit for the extra solar energy that goes into the grid during the day, there is more energy available at night to charge the Tesla.

So, the grid acts as the “battery” in net metering.

How Long Does it Take to Charge a Tesla with Solar Panels?

When a Tesla is charged with solar panels, it is likely to take longer than when it is charged at a Supercharger station or at home with regular electricity.

If you only have portable solar panels, it can take up to 40 hours on average to fully charge a Tesla.

One thing about solar energy that has us interested is how Tesla Model 3 cars can be equipped with a solar trailer.

Stopping at a charging station may not be necessary if you can drive nonstop while the car charges itself as it moves.

Due to the extra weight of the solar trailer, however, the Tesla’s range would be cut, making it more likely that it would need to stop at a charging station.

When you charge a Tesla at home, it takes a lot less time.

Since residential solar panels produce much more energy than portable panels, a Tesla could go from having no charge to being fully charged in as little as seven hours if only five panels were used.

This can change, though, depending on the weather, the car’s battery, and other things.

Can You Charge a Tesla with Portable Solar Panels? 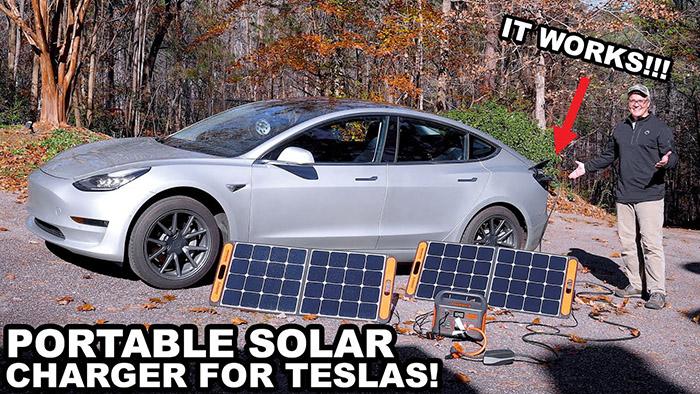 We’ve talked about this a few times along the way, and we’ve come to the conclusion that you can charge a Tesla with just portable solar panels.

But it has been shown that doing so could cut down on how far a Tesla could go on a trip.

So, charging with portable solar panels might be enough to get the trip started, but it’s likely that the panels won’t give the Tesla enough power to keep going without stopping at a charging station.

When thinking about this option, both how useful it is and how much it will cost will come into play.

Based on different calculations, we have seen estimates that it would take as many as 75 portable solar panels to do what a fraction of full-sized residential solar panels can do when charging a Tesla.

At an average price of $200 per panel, this could mean spending at least $15,000 just on the portable panels themselves.

When you add in the costs of an inverter, cables, and a trailer for the solar panels, the total cost is likely to be more than $20,000.

If Tesla drivers have portable solar panels, they might not need to find a charging station while on the road. However, we think it would be better to spend $20,000 on a home solar panel system.

Since they can store a lot more energy and put out more power, Teslas can be fully charged in just a few hours and can travel farther.

Can a Tesla be Solar Powered?

Many owners of electric cars like Tesla wonder why they don’t just have solar panels on their roofs.

Even though Tesla cars can easily be powered by solar energy, it has been decided that putting solar panels on their roofs is not a good idea.

First of all, the roofs of most cars only have 10 to 25 square feet of space.

This might sound like a lot, but a 10 square-foot solar panel can make 50 watts of energy when it’s in direct sunlight.

But this amount of energy is only enough to power one lightbulb, so the car would only be able to go one to three miles.

If a car could only fit a certain number of solar panels, it would need up to 90 hours of direct sunlight to get enough energy to go its maximum distance of 300 miles.

Tesla owners who want to power their cars with solar energy should look into Tesla solar panels that can be put on the roof of a house.

They are very efficient and can be put on both simple and complicated roofs. They are powered by a Tesla Solar Inverter, which means that the energy system is fully integrated and can be used with Tesla cars.

Tesla plans to make many more vehicles that can be powered by solar energy, like trucks and minivans, in addition to the cars it already makes.

The company also wants to build a lot of charging stations around the world that will only use solar power.

If a Tesla owner’s home already has a solar energy system, we think a wall-mounted charging station is a great idea for the Tesla Model 3.

The number of people using these charging units, which have a 24-foot cable to make charging easy, will continue to grow.

Solar power seems to be the future for Tesla cars, since it is a clean energy source that is expected to be used more and more in the coming years.

What Are Symptoms Of Oil In Intake Manifold?
Car Windows Fogging Up Inside When Driving
How Does A Performance Exhaust Affect Gas Mileage
Maryland Window Tint Laws That You Need Know