After seeing a test mule for the Corvette a few months ago. Chevrolet has shown off the 2019 Corvette ZR1 in Dubai, so the secret is out. Next year, this supercar will be sold on the international market. (Read: “Chevrolet leaves India”)

The American company that makes the Vettes says that the new ZR1 is the best-performing Vette ever on a racetrack. When we look at the 2019 ZR1, we have no reason to doubt that claim. It has a huge wing on the back, a lot of air ducts on the front, and a stance like a racecar. A new BMW Z4 concept has been shown. 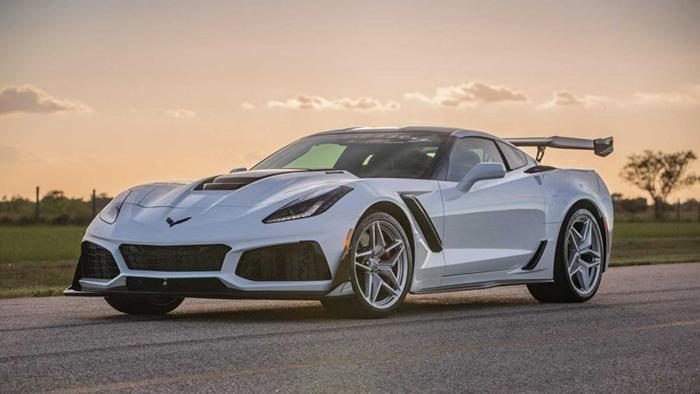 The track-focused supercar will have a 6.2-liter supercharged V8 engine with 755 bhp of power and 969 Nm of torque that will tear up the road. GM has made an engine with both direct and port fuel injection for the first time. This is different from the Z06, which only has direct injection. A cool side effect of more power is flames coming out of the exhaust. You can choose between a 7-Speed manual transmission or an 8-Speed automatic transmission.

The Eaton supercharger on the 2019 Chevy ZR1 is bigger than the one on the Corvette ZO6 (Company is claiming 52 percent more displacement). This means that we need a better way to handle heat. Because of this, the ZR1 has 13 heat exchangers and four new radiators. Because of the big engine up front, there was more weight on the front wheels. To make up for this, the front wheels are 19 inches wide and have 285/30ZR19 tyres, while the back wheels are 20 inches wide and have 335/25ZR20 tyres. The Michelin Pilot Super Sport tyres are on the car.

The Corvette ZR1’s interior has been updated with better fit and finish and better materials. There is a mix of leather and Alcantara in the seats. Dashboard and steering wheel gets carbon fibre inserts. GM has a Performance Data Recorder for people who like to go to races. And the Bose premium audio system will keep you entertained on the way to the racetrack. India won’t be getting the ZR1, but check out its rivals: India is where the Lamborghini Huracan Performante was released.

What Is A C1201 Toyota Error?
What Causes A Torque Converter To Go Bad
Differences Between A Drive Belt Vs Timing Belt
Starter Engages But Wont Turn Engine Over