You want a smooth ride when you’re driving down the road, and your vehicle’s suspension gives you that. Your control arm bushings are an important part of your suspension system that people often forget about.

They do a great job of protecting your suspension parts because they are made to absorb the impact of every bump and dip in the road. But like any good buffer, they need to be replaced every so often to keep working right.

Control arms are a part of both your steering and suspension systems. They allow your car’s wheels to move with the dips and rises in the road while keeping the cab at the same height. Your car has two control arms, one at the bottom and one at the top.

The upper control arm of your car also helps the front wheels turn, so it is a key part of your steering system as well.

A ball joint connects the end of each control arm to the wheel of your car. On the other side, bolts that go through bushings connect it to the frame of your car. These are the bushings for your control arms.

Why are Control Arm Bushings Important? 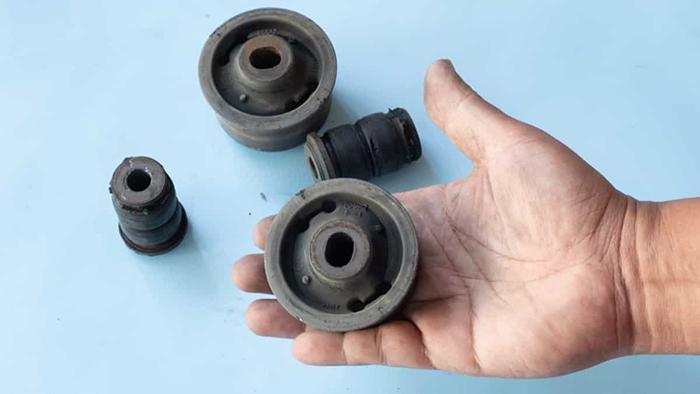 If you didn’t have control arm bushings, your control arm would just rest on the frame. Both parts are made of metal, and your control arm moves, so this would be a big problem. Not only does metal on metal sound bad, but it also wears out the parts very quickly.

The control arm bushings protect both the frame and the control arms, which could end up costing you a lot of money to replace.

Dampen Vibrations from the Road

Rubber is very good at absorbing vibrations and shocks, which is why control arm bushings are made of rubber. Rubber bushings take up all the small vibrations that your control arm would otherwise send straight to the frame and then to you. 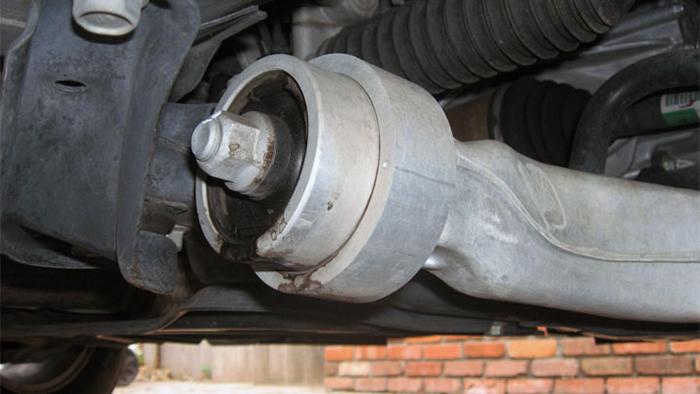 There are clear signs that the bushings in your control arms are worn out. If you don’t listen to them when they come up, you might have to pay for more expensive repairs in the future.

This shaking will be most noticeable when speeding up or slowing down. Even worse, once it starts, it gets much worse very quickly. Once the bolt has a chance to pick up speed before it slams back into the bushing, it doesn’t take long for it to start tearing the rest of the bushing apart.

Unusual Noises When Braking or Accelerating

It doesn’t come as a surprise because when the bushing wears out, not only the bolt but also the whole control arm moves. It can make a lot of noise when it stops moving, depending on what it hits. When the control arm bushings are worn out, they often bang, clank, and clunk.

You can hear these sounds as you drive down the road, but they are much louder when you speed up or slow down quickly.

You’ll feel every bump in the road more, and if your bushings are worn out, you’ll feel your wheels move when you hit the brakes or gas pedal hard.

If your control arm bushings are worn out enough, when you hit the brakes, your wheels, tyres, and hubs will move. This change will slow down how long it takes for your brakes to work, which could be the difference between getting into an accident and stopping just in time.

Bushings don’t get this bad very often, and if they do, you probably need to replace more than just the bushings.

Also, if you don’t do the work yourself, you’ll have to pay for the cost of labour. Most of the time, this costs between $100 and $300 for each side.

That means that if you do it yourself, the real cost of replacing your control arm bushings can be anywhere from $40 to $400. If you have a professional do it, it will cost between 240 and 740 dollars more.

Even though this seems like a lot, it’s nothing compared to how much it would cost to replace the whole control arm, which costs between 120 and 350 dollars just for the part.

How to Replace a Control Arm Bushing

If you look at the prices above and decide you want to do this job yourself, you’re in luck if you know a little bit about mechanics and how to do things yourself.

The first thing you’ll need to do is take the control arm out of the car. It doesn’t sound as bad as it is. Put the car on stands and jack it up. From there, slightly lift the upper control arm and take out all the cotter pins and bolts that are needed.

After you take out the upper control arm, you’ll need to take out the bushings. The easiest way to get them out is with a hydraulic press, but you don’t have to use one. There are a lot of tips and tricks for getting them off with C clamps, but I’ve always just put them in a vice and used a hammer and socket to beat them out.

It’s a fair amount of work, but it’s not too hard, and you’ll save a lot of money if you do it yourself instead of taking it to a mechanic.

What Will Happen if I Don’t Replace my Control Arm Bushings?

If you’ve read all of the above and don’t want to deal with the price or the hassle, you should think again. That’s because it will cost you even more money in the long run if you don’t replace your control arm bushings when they wear out.

Your control arms will wear out first, but you could also hurt your shocks, struts, ball joints, and even the frame. In no time at all, that $300 repair can turn into a $3,000 repair.

And this is assuming that everything goes well. That’s because worn-out control arm bushings can cause the brakes to work less well, which is one of the biggest worries. If you get into an accident, you could damage or even destroy your car.

Take an extra minute when you change your oil to look at your control arm bushings. It might seem like a small step, but it can keep a lot of problems from happening in the future. Even though you can see the signs of bad control arm bushings, most people don’t notice them until they’ve done even more damage.

It’s a shame because changing control arm bushings is cheap and easy if you do it yourself, and it’s much cheaper than the repairs that are needed if you don’t change them when they need to be.

What Do Catalytic Converters Do to reduce Exhaust Smell?
Honda Radio Code Error E
What Does A Downstream O2 Sensor Do
Can You Drive A Car With A Bad Starter