What Are Heated And Cooled Cup Holders? Updated 01/2023

Some cars now have cup holders that can heat or cool drinks. Have you ever wondered how they work? So did we, so we went to find out what was going on.

Heated and cooled cupholders control the temperature of liquids by using an insulated liner and one or more thermoelectric devices. The fact that this system is active makes it much better at controlling temperature than insulation alone.

This may seem like a simple answer, but there is a lot more to heated and cooled cup holders than just this! Read on to find out more about them.

What are Heated and Cooled Cup Holders? 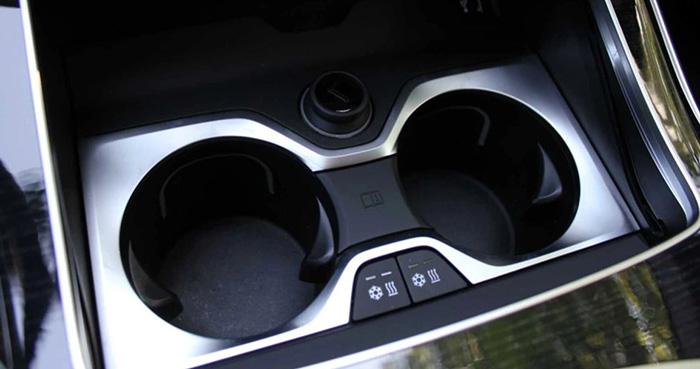 Heated and cooled cupholders are still a bit of a mystery to many customers because they are a relatively new feature that is mostly found in high-end cars. How do they work?

Well, heated and cooled cupholders are safe, and they heat or cool your cupholders so you can keep a hot coffee warm and a cold soda cool.

How Do They Work?

This heating element won’t stay on if you turn off the car or press the button to turn off the electricity. Also, each of the two cup holders works on its own.

This means that you can heat a hot drink on the left side and cool a cold drink on the right side for your passenger. This is becoming more and more of an option for people buying cars, and since more cars are coming with it, there may be more in the future.

Well, misusing anything that uses heat can be dangerous. That also goes for cup holders that heat up.

Also, putting the cover over the opening of the cup holder while the heating element is on could cause it to get too hot. If it gets too hot, it could hurt your cup holders, middle console, or other things.

Also, make sure you don’t put anything that can get damaged by heat in the cup holders when the heating element is on. If you do this, the heat will probably burn the thing and could damage your car.

But many of these problems are caused by people misusing the cup holder or by accidents. So, if you take the right steps, you shouldn’t have any problems with the heated cup holders.

What Temperatures Do These Cup Holders Stay At?

Well, because each company that makes cars is different, each model can be different. So, the temperature might be different from one car to the next.

But since there are some basic temperatures to stay at when heating or cooling a drink, all of them will be close to that of the vehicle we look at.

As an example, let’s look at how hot or cold the Chrysler 300C’s cup holders get.

This luxury car is one of the few on the market that comes with both heated and cooled cup holders, so it’s a great way to try them out.

The first thing you’ll notice is that as soon as you turn on the system, you’ll feel heat and cold coming from the cup holders. This is a good sign that your hot drinks will stay hot and your cold drinks will stay cold enough so that your ice won’t melt quickly, if at all.

But when the exact temperatures were checked with a thermometer, they turned out to be better than expected. A water bottle was put on the cold side, where the temperature was about 48 degrees.

This is cool enough to keep water cool, and it can also be used to keep all kinds of cold drinks nice and cool. This temperature will keep your soda, water, iced tea, or frozen lemonade cold and stop anything frozen from melting too quickly.

Since you can already feel heat coming from the cup holder, you should expect it to be hot enough for tea or coffee.

The temperature was just over 113 degrees when the thermometer was used. This is great for hot coffee and will keep your drink hot on the way to work.

Even though the temperature of the heating and cooling systems in each car might be a little different, all of them should be about the same as this one. If it doesn’t, it might not heat or cool your drinks enough to make a big difference.

Can You Add Heated and Cooled Cup Holders to Any Car?

Well, even if you want to add this to an older car or a new car that doesn’t have it, you can’t do it yourself. It’s not an aftermarket system.

Some car owners might be sad to hear this, but just because you can’t add the whole system to your car doesn’t mean you can’t use it.

If you want to add a heated or cooled cup holder to your car, you can buy a single holder that fits inside the cup holder you already have. This option can be used while driving because it plugs into the cigarette lighter.

These cup holders fit inside the cup holder, but they won’t take up space for a big cup because the top of the cup holder opens up for bigger drinks. These can hold bottles, cans, and drinks from fast food places.

You can get these for both heating and cooling, so you could have both in your car, but you can only use one of them at a time.

There are some downsides to adding one of these cup holders to your car, like the fact that you can only use either the heat or the air conditioning at the same time.

The first problem is that these aren’t as durable and well-built as the heating elements in cars, so they won’t last as long. This means that if you use it every morning, you might have to buy a new one every few months because it probably won’t work for long.

And since it has a heating element, there is a chance that it will get too hot. Since this is a cheap option that doesn’t come with any safety features, it might not be as safe as a built-in option.

Also, the drink stands up higher than it would if it were in the cup holder of the car. Because the new holder fits inside the old one, the drink will sit in the raised holder and come up higher in the middle of the car.

As new luxury cars come out with more and more ways to make a car more comfortable, adding cup holders that can heat and cool drinks is a natural step. Most people don’t know how these cup holders work, though, because they are still pretty new.

You now have all the information you need to decide if you want a car with these cupholders. You know how they work to heat and cool your drinks, what temperature they stay at, and that they are safe.

Also, with the detailing of the issues with added heated and cooled cupholders, you can see that adding ones to your existing cup holders is not the best idea. So, use this information to help you decide what to do.