Which Ford Models Have The Courtesy Wipe Feature? Updated 02/2023

Automated computer systems in many Ford vehicles now include courtesy wipes. To clean the windshield, the wipers will swipe three times as usual after the cleaning fluid has been sprayed on and the wipers have been triggered.

After a three-second wait, the windshield wipers perform an additional courtesy wipe.

How Is This a Useful Feature?

As an added bonus, the windshield wipers are designed to remove any stray drops of windshield cleaner from the driver’s line of sight. Washer fluid may be caught in the initial few swipes, but droplets pushed downward will likely shoot back up and block the driver’s view. Distracted driving and the necessity to manually engage the windshield wipers are two of the dangers of this function, which is designed to minimize both.

The most common reason for car accidents is distracted driving. There are already so many distractions in a driver’s daily routine. Most drivers (more than half) say they’ve eaten or drunk anything while behind the wheel, 40% say they’ve occasionally driven under the influence of alcohol, and 30% say they’ve done it while texting.

In addition to talking on the phone and fiddling with the radio or music player, most drivers enjoy listening to music or podcasts as they drive. When you’re driving, you’re more likely to get into an accident because of all these circumstances. In many cases, automation is aimed at preventing car accidents, vehicle damage, and possibly dangerous injuries by automating various safety features.

Which Ford Models Have The Courtesy Wipe Feature? 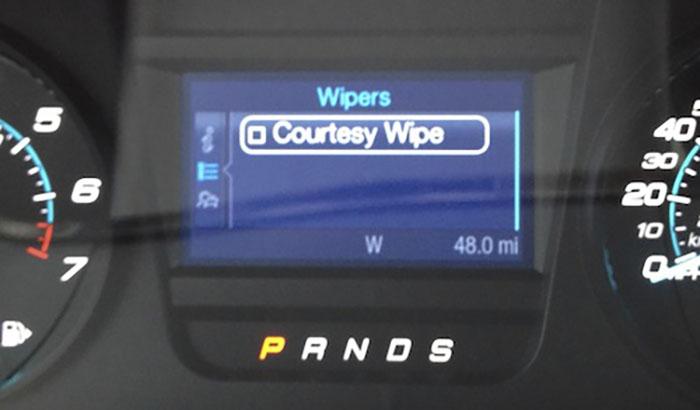 The courtesy wipe feature is not available on Ford sedan models such as the Focus, Fusion, Taurus, and Fiesta.

Lincolns, Hondas, and Chevys are just a few of the other automobiles that offer the courtesy wipe option. Ford F150s have a similar, but not identical, procedure for disabling the feature on those cars. The user handbook will include instructions for other models and makes of automobiles, as well.

Why would you want to disable it?

For a variety of reasons, many people prefer to turn off the courtesy wipe. There are some drivers who believe that the second wipe is more of a nuisance than useful. They worry that the courtesy wipe will wear down the vehicle’s wipers, causing them to break down more quickly than normal.

Some people simply dislike the feature and wish to turn it off. In the majority of automobiles, this feature may easily be disabled. The 2011 and previous F150 models, on the other hand, have no means to turn off this feature. Drivers didn’t like it, and it didn’t greatly increase car safety, therefore it was scrapped in 2016.

On any 2011 or later Ford F150 or comparable Ford truck, disabling the courtesy wipe is a simple process. Models prior to 2011 did not have the option to disable the feature. As a result of this, the functionality cannot be disabled in certain model years.

This option can be accessed through the vehicle’s central dashboard display menu. The feature can be disabled by following these simple actions.

The courtesy wipe will be disabled if you follow these instructions. If you want to disable or change the function of other automatic features, there are many other choices in these menus to investigate. In order to re-enable the feature after a factory reset of the dashboard, these steps must be done.

What Other Automated Features Does the Ford F150 Have?

The computer systems on automobiles have likewise become more complex as technology has become more complex, cheaper, and easier to create. The F150’s courtesy wipe is just one of many features that some drivers may desire to disable.

The amount of work that a driver is expected to do while driving has decreased as a result of technological advancements. In order to reduce the number of tasks that a driver must undertake manually, most automated features are designed. As a result, the rate of distracted driving may be reduced, but the risk of failing to complete the duties is still present. To eliminate this possibility, many drivers prefer to drive with the controls in manual mode.

In addition to these more recent sorts of automatic systems, Ford F150s and other models come standard with the following ones:

A sensor on the windshield column activates the wipers when rain or other liquids are detected on the windshield. As early as 2010, most models came equipped with this capability, and it has remained so ever since.

Pre-collision assistance is standard on newer F150s. With this system, the driver is warned when automated brakes may be needed to avoid an accident. Many drivers enjoy this safety feature, which can assist avoid minor collisions to large collisions.

All new Ford F150s come standard with these features.

Even if these characteristics weren’t normal, most drivers wouldn’t think anything of them and would consider it even more unusual if they weren’t there. People’s daily lives are becoming increasingly dependent on technology, and this includes their vehicles. Automated functions are becoming more and more widespread in automobiles as they move forward. The goal of the manufacturer is to minimize the number of distractions that a driver encounters..

It is essential for any driver to know what each feature does and how it works in order to get the most out of it. Distracted driving puts everyone on the road at risk, including the driver, passengers, and other motorists. Text messages and coffee aren’t the only things covered here. A thorough understanding of how the car and its many systems work is also required.