What Are The Functions Of A Crankshaft Seal? Updated 01/2023

This article contains affiliate links. Using any of the links on this page will allow me to earn a small commission at no additional cost to you. Is it possible for a crankshaft seal to leak? High mileage is the most typical cause of crankshaft seal leak.

Many individuals are unaware that crankshaft seals exist until they begin to fail and cause issues. If a crankshaft seal leak goes unchecked, the engine of your vehicle will be severely harmed.

What Is A Crankshaft Seal?

Typically, a crankshaft seal is constructed of rubber or silicone and metal and is circular in shape. It is a crucial component of an engine. These parts are affixed in front of the engine and serve to seal off the crankshaft’s end.

What Are The Functions Of A Crankshaft Seal? What Causes a Crankshaft Seal to Leak?

Vehicle oil leaks are a classic sign that something is wrong with your vehicle. The crankshaft seal, like every other part of an automobile, wears and shreds and eventually breaks down. In most situations, crankshaft seal leaks are caused by excessive mileage. It is recommended that the crankshaft seal be inspected every 100,000 miles because it is nearing the end of its useful life.

The crankshaft seal, like any rubber component, can dry up and become brittle over time when a car is driven. If the crankshaft heats up or if there is persistent contact between the crankshaft and the timing cover, this might cause the timing cover to stick. Lubricant degradation of the car’s rubber parts occurs together with the normal wear and tear produced by friction and heat within the components. To put it simply, if the rubber seal on the crankshaft begins to lose its elasticity, it will eventually break.

How Do You Know A Crankshaft Seal Is Bad?

It takes time for car parts to degrade. Because of this, they eventually deteriorate to the point of being totally ruined. The following are signs that your crankshaft seals are bad or failing:

Vehicles with a High Mileage of at Least 100,000 Miles

Although this isn’t a problem in and of itself, it is an indicator that the crankshaft seal is about to expire. Most automobile components have a service period specified by the manufacturer. Crankshaft seals typically last for 100,000 miles before needing replacement. Crankshaft seal failure can be avoided if the seal is serviced at the proper interval. As a result of this, it protects the seal and mitigates any potential issues that may occur.

Oil Leaks from the Front of The Engine

The most prevalent indicator of a crankshaft seal failure is oil leakage. An oil leak is almost certain if the crankshaft seal becomes cracked or worn out. Leaks of any size are possible. In the case of small leaks, the oil can accumulate under the engine, while a larger or more severe leak can produce a drop of oil from the engine’s front end. When the car is parked, this can be seen.

Crankshaft seal leaks rarely cause this symptom, thus it isn’t particularly concerning. Clutch slippage may be caused by oil splatter from a blown crankshaft seal. Because your automobile is self-driving, you may think this isn’t relevant to you. Clutches are also seen in automatic automobiles.

Can A Broken Crankshaft Seal Be Fixed? 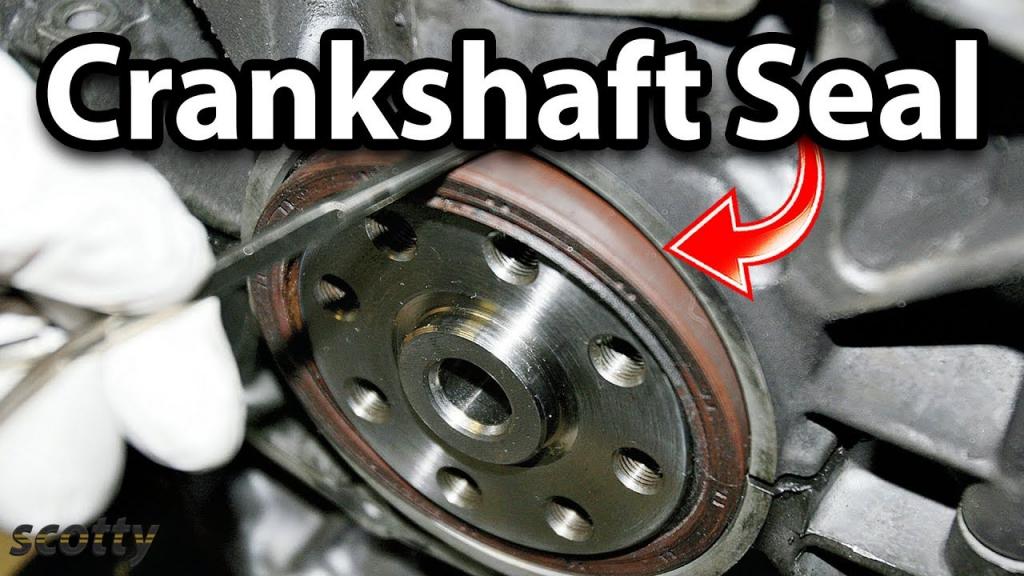 This procedure involves removing and replacing the crankshaft seal. Reinstalling the crankshaft damper and replacing the timing belt and cover is completed. Afterwards, the jack is removed, and the car is driven to the ground with its jack stands removed. I’m sure you don’t want your crankshaft seal to degenerate to the point where it may stop you in the midst of a freeway on a road trip after completing the instructions above. Therefore, you should have your car checked by a competent mechanic if you feel that your crankshaft seal is leaking or has reached the end of its service life. Do not rely on short-term remedies, such as crankshaft seal additive combinations. There are no oil leak-stopping miraculous products that you can add to your oil. Using these products for a lengthy period of time can cause serious engine harm. You can use them for a few days until you can get the crankshaft seal replaced, which should only take a few hours. In addition, see if the ABS sensor can cause a transmission issue by reading:

Despite its simplicity, the crankshaft seal is critical to the engine’s overall performance. Keeping track of service intervals and keeping an eye on mileage is essential, especially for vehicles that are constantly in use. Crankshaft seal failure means the end of the engine.