People often think that the link between torque and power is more complicated than a woman. But it doesn’t. Here’s what’s going on.

“Torque is a way to measure force right now; it has nothing to do with time. When you add the time component to the torque, you get power.”

One of the most common questions at cruises and shows all over the country is, “How much power do you have, mate?” It’s a direct reference to how much power the engine has or how loud it is. Still, only a small number of people know the difference between torque and power.

People usually ask about the BHP of an engine when they want to know about its power. The engine’s flywheel is used to measure the brake horse power. In the factory, this is done on the engine bench and in the test room, where the engine is run without the car.

To measure the power at the wheels, regular people like us have to use the dynamometer, which is also called the rolling road. Its “Brake Horse Power” is the amount of “Brake” force it uses while testing. To figure out the power at the crank, you add an estimated percentage to the Bhp numbers at the wheel.

Dyno is used to measure how well an engine works. 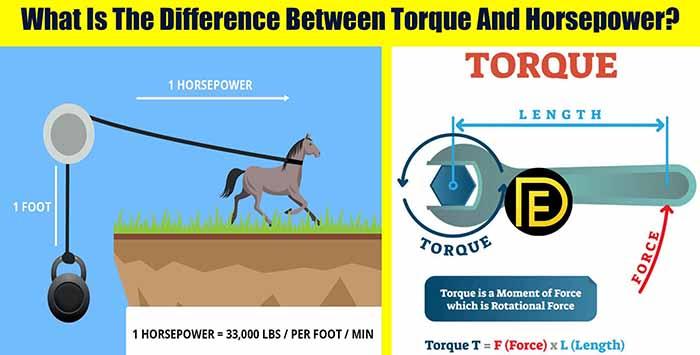 History of the word ‘Horsepower’

A long time ago, a man named James Watt was an engineer who made a steam engine. He needed a way to explain how much power his engines had. At that time, horses were the main way to power machines, so potential customers could easily relate to them. This led to the way we measure power today, which is called “horsepower.” How to take care of a car with a turbocharger

He chose to figure out how fast a horse could work. He put several dray horses to work by pulling different weights up a mine shaft. He figured that each horse could do 22,000 ft/lb of work in a minute. That is, it could move a weight of 22,000 pounds up one foot in one minute.

James realised that someone could challenge him by bringing a stronger horse to show that his claims were not true. So, he decided to add 50 percent more horsepower to his standard of one horsepower. This gave us the measure of power that is still used today: 1 horsepower is the amount of work a horse could do at a rate of 33,000 ft/lb/min. Check out this video to learn more:

Are you confused by the different words carmakers use to talk about power and torque? Let’s give you a hand:

The dyno can figure out the horsepower if it knows the torque and the speed of the engine. The force at the wheels is called torque. Torque is the force or strength of the engine at each speed. It is a measure of how hard the engine can push each time it turns (rpm). Power is equal to force times the speed of the engine. It tells you how quickly it can do work. In other words, torque is how much work the engine can do (how strong it is), and when you multiply that by the speed (rpm), you get the rate at which it can do work, which is called power. Torque and power are directly linked, as you can see. When it comes to car engines, it’s easy to get them mixed up. In fact, a lot of professional race car drivers get the two mixed up.

A top racecar builder named Ralph Broad got tired of his drivers making mistakes many years ago. He wanted to show that speed isn’t just about strength. He made a 1600 cc BDA screamer engine with 225 Bhp (but correspondingly low torque figures). He also made a second low-revving 1800cc engine that made 175 Bhp (correspondingly high torque). Both engines were put in the same kind of Escort race car. He raced both of these cars against each other at Oulton Park to show people who think power is the most important that he is right. The same person drove both cars on the same day with the same tyres. In the end, the car with 175 Bhp was 2.5 seconds faster per lap. Yes, torque is more important than most people think.

Look at the graph above to see how torque and power are linked. For the best engine performance, the graph should have the most space. This means the most torque over the widest range. But this is not what gives you the fastest top speed. For that, you need horsepower. The equation shows that if the power and torque curves are plotted on a graph, the lines should cross at 5252 rpm. This is a useful check if you’re given a set of curves for your engine.