When running, an engine with moving parts that burn fuel makes a lot of heat. It is very important to cool them down. If not, they would get too hot and start to break down.

The radiator is the most important part of your car’s cooling system.

But “radiator” seems like an old word, doesn’t it? Surely, water-cooled radiators are no longer used in new cars, right?

Almost all modern cars still use radiators, which are usually made of lightweight aluminium because it works well. They have made cooling systems that pump coolants through radiators after the coolants have absorbed heat.

Read on to find out more about why even new cars need radiators to work right.

Do Modern Cars Have Radiators? Air-cooled engines aren’t used in as many cars as they used to be. Most cars now have newer cooling systems that have taken their place. Most of them use radiators as a key part of the system that keeps them cool.

Flat tubes that connect the radiator to the car often have a few aluminium fins on them. These make the radiator’s surface area bigger, which makes it work better at cooling.

Heat moves out into the environment faster from areas with more surface area.

The rate at which a radiator cools is equal to its surface area squared.

So you can make them work better by making their surface area bigger. Heat moves from the radiator’s body to its fins and then into the air.

A turbulator is used in many modern designs to make fluids move around more. Its heat transfer rate can also be increased by stopping its flow as it moves through.

Liquid that flows smoothly only moves heat when it touches the radiator.

Most of it is stuck in all the tubes, so it can’t do anything. But putting in a turbulator changes this.

Adding some turbulence helps spread the heat. It increases the number of molecules that touch the outside.

Do Some Cars Not Have Radiators?

Only a small number of cars don’t have radiators as part of their cooling system. Most of them are also no longer made. Air-cooled engines, on the other hand, do exist.

They get rid of the old radiator and replace it with a design that focuses on air flow. Some air-cooled engines even have fins that help move heat away faster.

They are used in many off-road engines. For example, the one in your generator may be made so that it cools itself with air.

Lawn mowers and motorcycles are also good places to look for them.

An air-cooled engine is one that doesn’t use a liquid refrigerant to move heat. You won’t find many of them on road vehicles made today, though. That doesn’t mean, though, that they have never been in them.

They make the engines of motorcycles lighter by taking up less space.

Plus, the air flow around the engines of motorcycles is usually better. So, it’s easier to make air-cooled engines that work for motorcycles.

This style has been used on a few cars that Volkswagen has made. The VW G1’s engine was cooled by air, and it was made until 1986.

If you like things from the 1960s, you may have seen the Chevrolet Corvair. From 1960 to 1969, they made them, and the engine design was always air-cooled.

What Type of Car Has No Radiator? 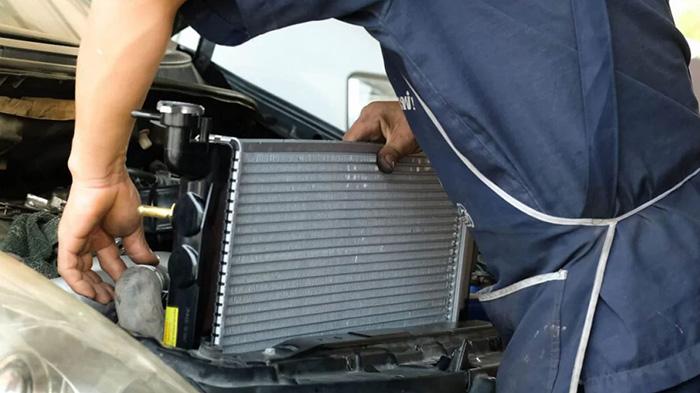 A lot of engines do not have radiators. But there aren’t that many new cars that don’t have them. Even so, there are still a lot of air-cooled engines in the aviation business.

One of the cars they are most likely to be in is a Porsche.

During the 1950s, the Porsche 356 was one of their most popular cars. It went on sale for the first time in 1948, when it was made public. Until 1965, they kept making them with the same design.

Another car with an air-cooled engine is the Porsche 911. It has a flat-six engine in the back that can run without a radiator.

That is one of the most powerful air-cooled engines that has ever been put in a car.

The VW Beetle also had an engine that was cooled by air.

In fact, they kept using them up until 2013. They are probably the most common type of car with an air-cooled engine.

What Does a Radiator Do?

A radiator is, in general, a type of heat exchanger.

They are used to move the heat that is made by engines that use fuel. They can move it from one medium to another to change the temperature of a system.

Radiators are used to keep a lot of things from getting too hot. Most engines that run on gasoline or diesel have them.

They only work when they are connected to the rest of the cooling system in your car. This lets coolant flow into the radiator while the engine is running.

This is what lets the heat move into the radiator.

When it gets there, it spreads out the heat. Most radiators also have something in them that stops the flow of the refrigerant. This makes it so that more of its molecules touch the walls of the radiator as they move.

The more molecules that touch its walls, the more heat it can spread.

They have also added fins to them so that they have more surface area. The rate at which it transfers heat increases as its surface area goes up.

Can You Put Water in Your Radiator?

It’s not a good idea to drive your car without enough coolant in the radiator. Your engine will probably overheat before you even get out of the neighbourhood.

If your radiator needs more water, that shouldn’t be the first thing you do. You should always use the right coolant to fill them up. Most of the time, looking at your car’s manual will tell you which type it uses.

Each coolant has a different colour, which makes it easy to tell them apart.

Make sure your radiator has enough water in it before you start the car.

If there is water in a radiator, it can be turned on. But you can’t keep using them. Coolant doesn’t boil at the same temperature as water.

So, it goes away much faster than coolant while you’re driving.

If you must drive with water in the radiator, do it as quickly as possible. You should try to go to the next auto parts store and get some coolant.

The right one doesn’t take long to find, and it will keep your engine from getting too hot.

Also, if you use water to cool the engine, it could break if the temperature drops below freezing. Most of the time, coolant can also be used as an antifreeze.

So, if the temperature drops very low, it can even keep your engine from cracking.

Automatic Transmission Types
Best Oil For 6.7 Powerstroke
Rear Brake Caliper Tool
Why Is My Windshield Fogging Up In The Summer