Catalytic converters are one type of device used to cut down on pollution. They can stop toxic fumes from coming out by speeding up a redox reaction. If you drive a Tesla, you won’t have to worry about this.

By starting this reaction, they can turn them into emissions that are safe.

The US was the first place where people could buy catalytic converters. Today, almost all gas-powered machines have them built in, which cuts down on pollution.

Do All Modern Cars Have Catalytic Converters?

In 1975, Congress wrote into the law that cars had to have catalytic converters. This was in response to a suggestion from the EPA that they make it a law that new cars have to have them.

Anything made after 1975 had to meet strict standards for pollution.

All cars had to be made with two-way converters because of this.

They have come up with a design that can use oxygen and carbon monoxide to make water.

Carbon dioxide is the only other thing that comes out of this reaction. When three-way models came out in 1981, it was time for a new converter. These also made nitrogen harmless by neutralising it as it left the exhaust system.

Most new cars have catalytic converters, but they can also be found in other places. If you look in a forklift, you’ll probably find one of them there. They are even used in most trains and motorcycles.

Most modern passenger cars have what are called “three-way converters.”

A two-way model can only be found in a lean-burn engine at this point. Since they were first put into place, government rules have made them pretty common.

Usually, the core of a catalytic converter is made of ceramic. They look like honeycombs, but instead of hexagons, they are made of squares.

This is the base of the converter. They made them so that as much surface area as possible is exposed to the air.

When they need a substrate for high temperatures, they sometimes use metal.

A washcoat is another thing that all converters have. Here is where the materials that start the redox reactions have been put.

Titanium is one type of metal oxide that could be used for this purpose.

With the washcoat, they put whatever catalytic material they are using on the surface of the core. They can also get the most out of the surface area by choosing rough materials.

On the washcoat, there is a catalyst that speeds up redox reactions. Most of the time, they’ll use a metal from the group of platinum. Many converters do this with platinum itself.

Palladium has also been used in converters as a catalyst. It can be useful if you want to speed up oxidation reactions.

It can be used with rhodium to take care of both kinds of reactions.

What Year Did Cars Start Having Catalytic Converters?

In 1975, the first big law that said catalytic converters had to be used was passed.

In that same year, the Environmental Protection Agency put out a report that said they should be used. After the report, Congress passed a lot of laws, including one about converters.

Not until the mid-1970s were they used by most people.

In 1975, most of the converters that were used were two-way models. This did nothing about nitrous oxides and other things like them.

In 1981, Congress changed their laws so that whenever three-way models are available, they must be used.

These work better when they have a lot of fuel around them. So, they might need injectors in the engine to work the way they were made to.

Do Diesel Cars Have a Catalytic Converter?

Diesel engines also use converters to reduce the amount of pollution they put out when you drive them. Their chemistry makes them different, though, so they don’t look the same.

If you drive a diesel engine, a diesel oxidation catalyst has to be part of the converter.

When making a catalyst for a diesel engine, palladium is used most of the time.

After they changed the rules about emissions, light-duty vehicles started using them in 2010.

Since then, they have been added to most diesel cars. They can change the particles that come out of the engine when you start it up.

Plus, they can often turn hydrocarbons into something else with a 90% success rate. That works even better than a lot of engines’ converters.

Why Did Car Companies Hide the Catalytic Converter? 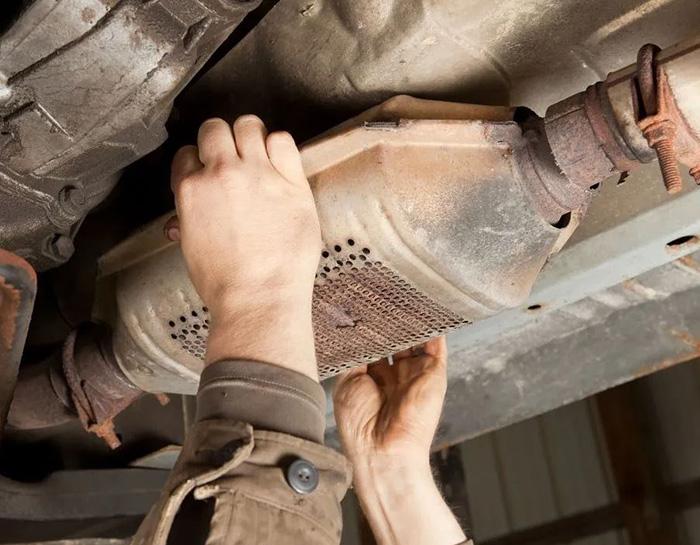 When making cars, no one thought about where to put the converters. But there have been a lot of thefts lately, which has made them change their minds.

Many companies now hide their converters, making them harder to find.

This is because they have become so easy to steal. You don’t want someone to be able to find them easily in your car.

If you don’t get one soon, you might not have it for long.

Why Are Catalytic Converters Stolen?

The main reason they are stolen is because you can get a lot of money for them if you sell them used. You could get up to $200 in scrap if you sold them on the open market.

Most of the time, they have valuable minerals inside that are part of the catalyst. If you sell platinum and palladium as goods, you can get a lot of money for them.

That’s why everyone has been thinking about them. Catalytic converters have been stolen a lot of times from a lot of places.

How Can You Tell if Your Catalytic Converter Has Been Stolen?

When you drive a car without a converter, it makes a lot more noise than normal.

So, you can try listening to your car to see if it seems to be making more noise. If so, it might not have its converter anymore.

If you press harder on the accelerator, this sound should get louder, so you can check that way. You might even notice that the car isn’t going as smoothly as usual. When you change gears, the engine might also make sputtering sounds.

You can also look at your exhaust system from the ground to see if it’s gone.

If there is a big hole in the middle of your exhaust, someone stole the converter.

When you’re home, park your car in the garage to keep it from being stolen.

If you can keep the car inside, it will be much harder for someone to steal it.