Everyone thinks about how to keep their car from being stolen. You may have already seen a steering wheel lock. You may have even wondered if it really worked. In all honesty, they’re better than nothing, but they don’t always work.

Steering wheel locks do keep thieves out, but they are not foolproof. The best way to keep your car from being stolen is to take multiple layers of safety measures.

How you use a steering wheel lock changes how useful it is. But it is possible to beat them. Let’s look at how they work and how thieves have figured out how to get around them. 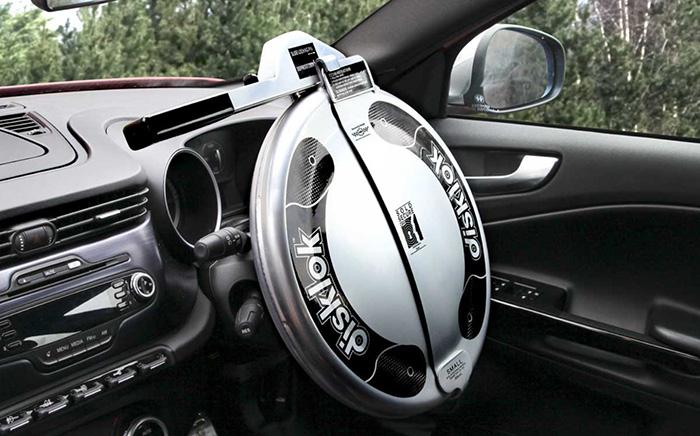 Most people have seen a steering wheel lock at least once in their lives. They look like a long metal rod stretched out over the steering wheel. When they are used, they are meant to stop people from steering the car.

Several shows have shown how useful they really are. These have shown, though, that a steering wheel lock can be broken.

Most of these changes did make the original design better in some ways. But they still don’t work perfectly. Even if you use them right, they won’t protect your car completely.

The first model just locked onto the steering wheel. It goes from one side of the handles to the other across the handles. With the thing in place, the wheel can’t turn around its shaft. Most of the time, you have to take them off before driving.

But cutting a hole in the wheel could make it easy to take them off. And it would only take a couple of minutes for someone to cut that hole. You shouldn’t use one of these as your main way to keep your car safe.

Better designs weigh more and are harder to take apart. These go all the way around the wheel. They are also tougher to cut through. If you don’t take it off, the steering wheel won’t move either.

Use one of the newer steering wheel locks if you want to use one. At least, they’ll make it take longer for someone to steal your car.

Still, you shouldn’t count on them as your only way to stay safe. If you don’t, you might be disappointed with how they do.

Can a Car Be Stolen With a Steering Wheel Lock? 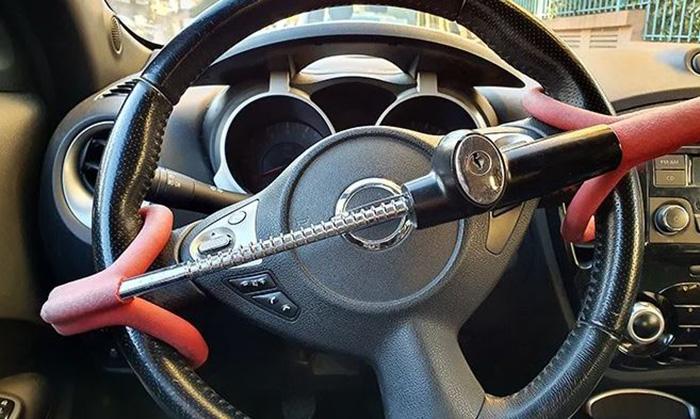 Even if a steering wheel lock is on a car, it can still be stolen. Thieves sometimes just cut the steering wheel to get away. Then, it’s easy for them to lift it out of place.

Sometimes, they have just cut the device. It’s no longer useful after that. It can be turned off without having to take it out of the car.

But that’s only in cars with the original equipment. Larger locks can sometimes work a little bit better. The Disklok, for example, is a pretty good deterrent. They are bigger and heavier than most steering wheel locks.

Still, not even the bigger devices are perfect. They might be harder to get rid of. But a thief who really wanted to could still take them from your car. They could do it in less than 4 minutes if they knew what they were doing.

That doesn’t mean, though, that you shouldn’t use one of them. Having a steering wheel lock makes your car less appealing to thieves. Someone still has to take it away before they can leave. So, you’ll be safe for a couple of minutes longer.

The best way to keep your car safe is to use more than one type of security. Adding more than one security feature makes it harder for someone to steal your car.

Alternative Ways of Securing Your Vehicle

Putting a lock on the steering wheel is not a bad idea. You shouldn’t use them as the only way to keep your car safe, though. Use more than one device if you’re really worried about security. This should make them a lot less tempting to attack.

Always make sure the car is locked. If the doors were locked, it would be much less appealing to thieves. Before they could get in, they’d have to pick the lock. That takes longer, and it might also make a noise.

Installing an aftermarket alarm system is another way to keep your car safe. If your car has an alarm, always make sure it’s set. Alarms are a great way to get people’s attention. Even in the middle of the night, they will make enough noise to wake people up.

Last but not least, you could also put a GPS system in the car. If your car was ever stolen, that would make it easy to find it.

Most thieves won’t steal your car if you make it hard for them to do so. Putting in a few different security devices should help you reach your goal. Most of the time, thieves try to find the thing that everyone has in common. In other words, they’ll start by stealing something easy.

Your car can be protected in other ways besides with deterrents. You could also stop the car from starting up at all.

Look for the relay box by lifting the hood. If it won’t start, you can pull out one of the fuses. Just pull on the relay until it comes out of the box.

You’ll need to get a new one before you can start the car again. A thief won’t be able to start the car, though, unless they put in a new relay.

The car’s tyre could also be covered with a boot. These don’t let the wheels turn. The people in charge of parking sometimes put them on cars that are parked in the wrong place.

You could do all of these things at once if you were very careful. Lock the wheel of the car. Pull a switch. And put a boot in. At that point, no one is going to move your car without a lot of work.

Keeping Your Vehicle Secure With a Steering Wheel Lock

Steering wheel locks don’t keep your car completely safe. At best, they’ll slow down how fast thieves can take them. A few extra minutes could make the difference between success and failure, though.

If you’re worried about your car being stolen, take a number of safety measures. Connect an alarm that can be heard to the car. At night, always lock the doors. And pull out a fuse from the car.

Then put a trunk on the car as well. If you do all of that, your car won’t move for a long time.