Does Cruise Control Use Brakes Updated 02/2023

Cruise control has been around for a long time and is very helpful on long trips.

But what is it exactly? And does it hurt more than it helps? Do your brakes wear out if you use cruise control all the time, or is that just a myth?

Traditional cruise control uses the car’s accelerator and has nothing to do with the brakes. On the other hand, Adaptive Cruise Control (ACC) does use your car’s brakes, so they will wear out faster than if you didn’t use ACC.

Remember that cruise control and ACC are not the same.

There are different kinds of cruise control, and this article talks about both of them, how they work, and how to use them.

So, if you want to know everything, keep reading this article until the end!

How does cruise control slow your car down? 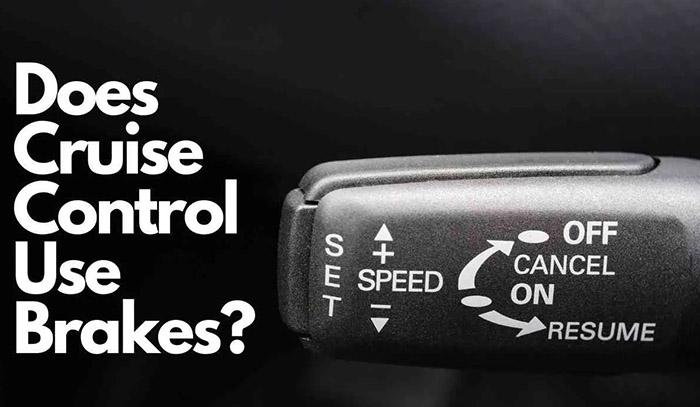 The car’s speed is controlled by the throttle when the car is in cruise mode.

Once a vehicle’s cruise control is turned on, it either uses a throttle cable or an electronic system to keep the vehicle going at the same speed.

The air going into the engine is controlled by a cable or an electronic system, so you don’t have to press or let go of the accelerator to change the power of the engine.

An actuator is in charge of this process. It is what opens and closes the throttle.

This is done with the help of a number of sensors that are built into the car. These sensors help control the brakes and speed of the car.

Adaptive cruise control keeps an eye on the car in front of you and either speeds up or slows down to match its speed.

Does cruise control wear out brakes? 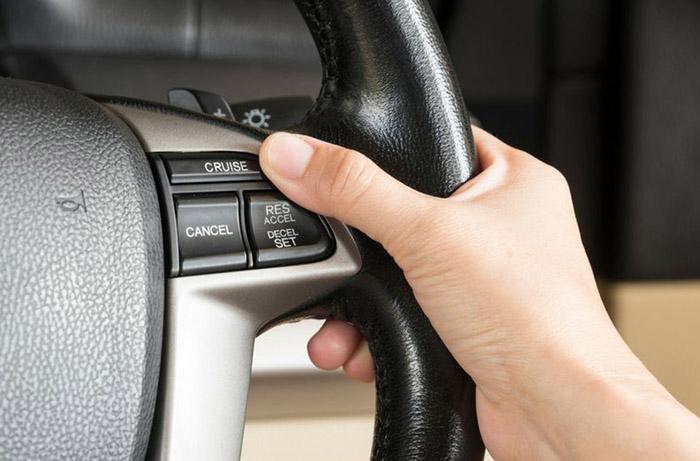 Normal cruise control doesn’t use the brakes at all. Instead, the speed of the car is controlled by the throttle.

Adaptive cruise control does slow down the car by using the brakes, but this doesn’t wear out the brakes.

Cruise control uses engine braking, which is basically downshifting to slow down and giving more gas to speed up.

When it comes to wear and tear, the only problem with cruise control is that your engine may be stressed when you drive on a slope, like a steep hill.

Does cruise control turn off when you brake?

Most of the time, the cruise control system turns off when the brake is let go or when the clutch is depressed.

Since automatic transmission cars don’t have a clutch, pressing the brake will turn off the cruise control.

Almost all cruise control systems have a switch that lets you turn the system on or off.

After turning on the cruise control, you have to set the speed you want the car to stay at. Most of the time, this is done with a button or by setting the stalk by hand.

If you press the cancel button, the cruise control system will forget the speed you set, but it will not turn off.

Some systems also have +/- buttons that let you change the speed.

When to NOT use cruise control

Even though it’s useful, that doesn’t mean you should use it all the time. There are many times when the driver should pay more attention to their surroundings and change the speed of the car by hand.

It’s a big no-no to use cruise control when you’re tired or sleepy. If you do, something bad will happen.

Since cruise control doesn’t really control the car, it’s best to drive it yourself if there is something in the road’s way.

When driving in the city, it’s also best to drive the car yourself instead of using cruise control. This is because the city is a very crowded place with lots of obstacles, like people walking, biking, etc.

Heavy traffic in cities can also be a worry because accidents are much more likely to happen.

When it’s raining or the roads are wet, you should never use cruise control. Cruise control can’t accurately take into account how less grip a car has on slick roads, which makes it easier to stop.

Even if your car has adaptive cruise control, you shouldn’t use it when it’s raining.

You also shouldn’t use cruise control on roads with turns and curves. In these kinds of situations, you need to drive carefully, not because your car’s speed is locked.

When should you utilize cruise control

On highways and other long, straight roads in dry weather, it’s best to use cruise control. It isn’t raining, there isn’t a lot of traffic, and you are completely aware and can easily control the vehicle.

What should I do to preserve my brakes?

If you really care about your brakes, you can do a number of other things to keep them in good shape.

When you drive at slower speeds, you don’t have to stop as often, and you can use the throttle to slow down. This will make the brakes work less hard.

Bleeding your brakes is also important because it gets rid of air that shouldn’t be there. When there is air in the brakes, it takes longer to stop, which can be dangerous in some situations.

The best thing to do would be to have a mechanic look at your brakes and bleed them for you.

When your car’s rotors are worn out, you should change them. This is good for your brakes. You can have your mechanic check how good they are and change them if they aren’t good enough.

Your brakes don’t get worse when you use cruise control, and there are many ways to keep them in good shape.

Make sure to only use cruise control in good situations and stay away from situations where using it wrong could cause an accident. Happy driving!