When you think of a liquid, like water, you know that it will eventually dry up. But what happens to the oil you put in the engine of your car?

Does it stay there forever, or does it too disappear?

If you want to know what happens to your engine oil when it evaporates, keep these things in mind.

When you put oil in your car’s engine, it will start to dry out over time. This won’t happen quickly, though. For the oil in your engine to evaporate over time, it needs to be exposed to very high temperatures, which happens when your engine is running. At normal temperatures, the rate at which car oil evaporates is so slow that you can hardly notice it.

But as your engine runs for longer, it will heat up more.

So, once temperatures go above 212 degrees Fahrenheit, which is the temperature at which water boils, evaporation will become much more noticeable, but it won’t be enough to hurt your engine as long as you have the right amount of oil in your car.

Don’t think that oil on the ground will go away any time soon. In fact, it might not even go away.

Even though some of it might evaporate over time, it’s likely that there will still be a pool of oil in the same place for a very long time. If you don’t clean up the oil or wait until it rains and the oil runs off, it will stay there for as long as you want.

You don’t have to worry too much about engine oil that is still in its bottle either.

In fact, most motor oil is made so that it can be used in your car’s engine for up to five years before it goes bad. Most of the time, your car’s engine oil doesn’t go missing in any significant amount. If it does, your car has a problem that you should fix right away.

If your car’s engine oil disappeared, you wouldn’t need to get your oil changed because there wouldn’t be anything in the engine to take out.

But not all cars are so lucky that they don’t have oil leaks and lose their engine oil.

If your car is in this group, there may be a few reasons why your engine oil is going somewhere else.

When engine oil is leaking out, it is often because of a problem with the gaskets.

This could be caused by a hole in a new or old gasket or by a new gasket that wasn’t put in right. When this happens, you probably won’t notice a big loss of oil all at once, but rather a slow loss of small amounts of oil over time.

Once your car has an oil leak and oil is leaking out, it can be hard for even the most experienced mechanics to figure out what is wrong and fix it.

In fact, it’s not unusual for cars to have to go to the mechanic more than once before the oil problem is fixed.

Some of the time, you might think your engine oil is gone when it has just changed how it looks.

If you haven’t changed the oil in your car in a long time, the oil that was once liquid may turn into something that looks like crystallised carbon. This is called a semi-solid substance.

If this happens, you or a mechanic will need to give your engine some TLC to get rid of this stuff. If you don’t, it will clog up your engine, stop it from working right, and probably cause it to overheat, which will cost you a lot to fix or replace.

Why is My Car Burning Oil?

If your car is burning oil, you need to fix the problem as soon as possible to keep the engine from getting damaged.

Most of the time, this problem happens because your car has worn-out parts.

Most of the time, worn valve seals and piston rings are to blame, since their main job is to keep engine oil from getting into the combustion chamber.

In some cases, your car may burn oil not on the inside of the engine, but on the outside.

This means that your engine oil is leaking out of somewhere, which is why you often smell burning oil. This can happen if your car’s oil pan is broken, if the oil filter is not properly attached, or if the valve cover gasket is broken.

If your car is burning oil, the good news is that you can keep driving it as long as you add oil to the engine when it gets too low.

But you should try to fix the problem as soon as you realise that your car is burning oil.

If you don’t do this, it could cause your catalytic converter to overheat or even blow your engine.

What’s it Cost to Fix a Car That’s Burning Oil? 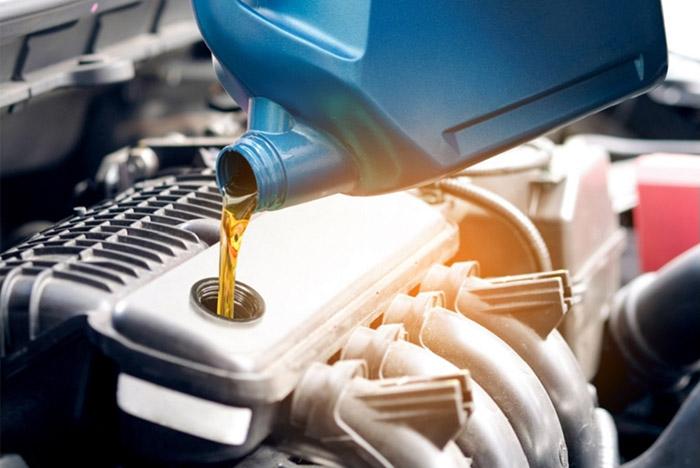 If your car is burning oil, how much it will cost to fix it will depend on how bad the problem is. In general, these kinds of repairs cost around $600 on average.

But if your head gasket is blown, the cost of fixing your car could go up to more than $1,500.

The sooner you take your car to a mechanic to fix the problem with the oil burning, the more likely it is that you won’t have to pay thousands of dollars to fix it.

How Long Does it Take Engine Oil to Dry?

Even though engine oil doesn’t always evaporate, it does dry out over time. Even though it won’t happen right away after you turn off your car’s engine, the oil that may be on different parts will dry as the engine cools down.

Most types of engine oil will dry in five to thirty minutes, depending on how hot your engine was when you turned it off.

You won’t have to worry if you spill oil on your engine while changing the oil, checking the oil level, or doing other repairs or maintenance, because you know it will dry in a few minutes.

What if I Smell Oil While Driving?

If you smell oil while driving, it could be a small problem or a big one. If you just changed the oil, hopefully it’s just a drain plug or oil filter that’s come loose.

If not, it could be because of bad gaskets, seals, or other problems that a skilled mechanic will need to check out.

Since engine oil is so important to how well your car runs, do everything you can to change it often and take care of any problems as soon as you notice them.