It’s fun to talk about terrible motor mounts. Maintaining an automobile in pristine condition would be too expensive and impractical. Due to the fact that new parts begin to wear out as soon as the old ones do, we’re constantly looking for ways to save money and avoid problems altogether.

In other words, how long can you keep driving if your motor mounts fail?

It all depends on how badly they’ve been harmed.

Minor signs of damaged motor mounts can be ignored and you can continue to drive. Symptoms may not develop for thousands of kilometers before the mounts need to be replaced due to damage to the drivetrain.

What Is The Purpose of Motor Mounts? 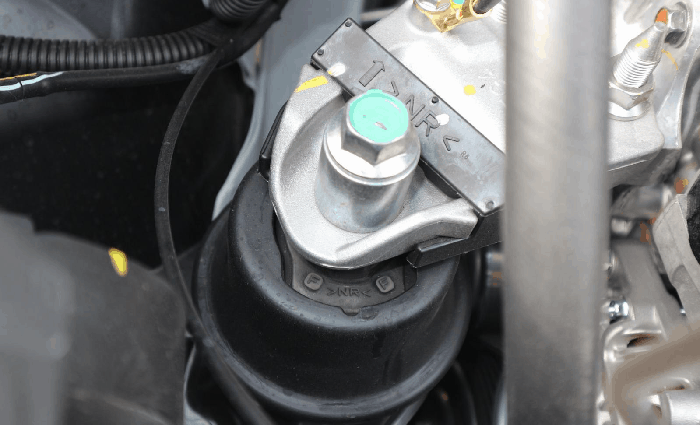 The motor mounts, also known as engine mounts, connect the engine to the car’s body and are critical to the vehicle’s performance.

Engines are a significant weight. V8 engines can reach 700 pounds in weight. It’s a lot to control when you combine it with the amount of energy generated by internal combustion and the movement of the crankshaft.

Welding the engine in place is an option, but it comes with its own set of issues. Even though the engine is locked down, it will still produce vibrations that go through the chassis and make the ride uncomfortable. In addition, the engine’s vibrations would wear out its components and eventually lead to its demise.

Rubber or fluid-filled mounts connect the chassis to the engine by forming a seal. In addition to dampening engine vibrations, they also absorb vehicle movement, which helps to keep the engine more stable.

Why Do Motor Mounts Fail?

A component’s lifespan is directly proportional to the strength it possesses. Steel alloys, on the other hand, cannot be used to make specific components, which necessitate the use of softer materials. Rubber is the major material used in control arm bushings and ball joints, which is also used in motor mounts.

In terms of vibration absorption and durability, the toughened rubber utilized to create these pieces is currently the best material available. Replacement parts aren’t expensive, and the labor expenses are frequently higher than the parts themselves. Cost and long-term usefulness are factors to consider.

A clunking noise originating from the engine compartment is an early indicator of worn motor mounts. An odd phenomenon, the sound of a clunk or dull impact can be heard accompanying it at any time. In actuality, the vehicle’s center of mass moves, causing this to occur.

Immediately apply gas, then quickly remove your foot from the motor mount. Once the accelerator pedal is released, the engine swings forward like a pendulum until it returns to its original position.

It’s apparent that the motor mounts are worn out if you hear a noise as soon as you let go of the pedal. Switching from accelerating to braking at low speeds allows you to perform a more challenging test. The braking increases the forward movement’s intensity and reveals the mount’s flaws.

There is a more dangerous symptom in the form of vibrations. Repairs should not be put off for long if you can feel the automobile vibrating through the pedals, steering wheel, and even the seat of the vehicle. System components wear out more quickly when they are subjected to high levels of vibration. The vibration will swiftly lead to other breakdowns even if the mounts are strong enough.

Lift the hood while the car is still running in park gear. If the engine mounts appear to be misaligned, you need to replace them right away. Engine movement that resembles that of a decades-old farm machine is also a valid example.

Even though some engine vibration is natural as the engine attempts to balance the internal explosions, excessive movement indicates that the motor mounts are failing to keep the engine firmly in place.

How Long Can You Drive With Bad Motor Mounts? 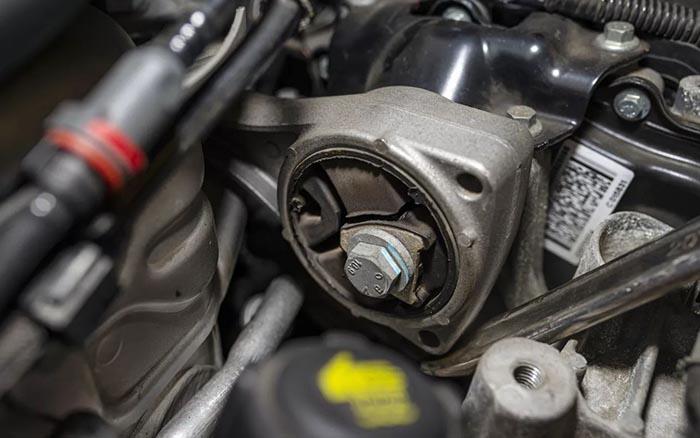 Only the sound of a clunking motor mount would be safe to ignore. My everyday driver’s motor mounts have been clunking for almost a year and 10,000 miles, so I speak from firsthand experience. I recently completed a 1200 mile road trip without any problems.

When I have the time or if I notice any vibrations, I’ll repair the motor mounts. However However, they’re a problem you can postpone, but not one that you can forget about.

How To Replace Motor Mounts

Because every vehicle is different, there are many stages involved in replacing the motor mounts. In a small engine compartment, getting to the motor mount might be a major challenge.

Getting the process done isn’t difficult if you’re diligent and consult vehicle-specific recommendations on how to remove obstructive components.

You may be able to get by with just a socket set and a Philips head screwdriver if you have a car that doesn’t require a full set of tools.

Some of the vehicle’s motor mounts can only be accessed from the underside. If that’s how your car was built, you should take it to a mechanic for repairs.

The car jack holds the engine in place while you work from the top. Even if you make a mistake and the engine isn’t properly secured, you won’t be hurt. The engine may collapse on your arms or head if working on the mounts from underneath requires gaining access and working in a dangerous environment. A more difficult assignment isn’t helping matters either.

Lifts and heavy-duty engine stands are used to raise the vehicle to the ideal working height, and the motor mount is then removed. Even with this type of motor mount on my car, I’m going to have to delegate this task to someone else.

How much does it cost to replace a motor mount?

The effort to repair a motor mount is more expensive than the mount itself, which costs anywhere from $20 to $50. You may expect to pay anywhere from $80 to $400 in labor fees, with a total cost of $200 to $600 depending on the complexity and number of mounts required.

How long does it take to replace motor mounts?

The difficulty of the work dictates how long it will take to replace the motor mounts. There is a time limit of eight hours for more complex designs when replacing two top-mounted motor mounts.

As soon as you start experiencing vibrations and engine rattling in your vehicle, you need to replace your motor mounts with new ones. Check out this post to discover more about what might be causing your car to shake. Another one of our articles discusses whether it’s safe to drive with worn-out control arm bushings.

NGK Vs Bosch Spark Plugs
Can A Bad Catalytic Converter Ruin Your Engine?
RPMS Fluctuating While Driving
How To Make Your Truck Louder