There are many ways to reduce nitrous oxide emissions from modern engines, but one of the finest is Exhaust Gas Recirculation (EGR).

The typically closed valve is the heart of the EGR. Electric step motor or vacuum control of the EGR valve connects the exhaust manifold to the intake manifold and regulates the flow of exhaust gas into the combustion chamber.

Controlling the flow of exhaust gas through the valve is its primary function. Carbon buildup is a common issue with the EGR valve, and it can cause it to become stuck.

The most common sign of an EGR valve that is jammed open is a sluggish and erratic idle. Light acceleration is possible when the EGR valve is open, causing the combustion temperatures to rise. 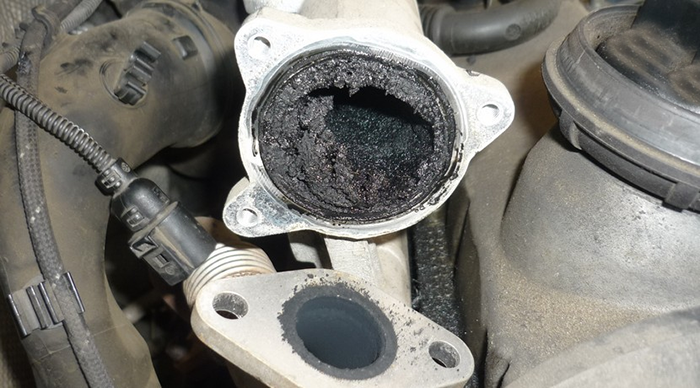 1. The Idle of engine becomes rough.

During a brief pause or when starting a vehicle, a rough idle can be caused by the valve being open and having continuous exhaust gas flow towards the intake manifold.

2. Your car has poor performance

When the valve is open or closed, it can have an adverse effect on performance. The unpredictable performance of your car can be caused by the wrong operation of the EGR valve.

Fuel usage rises as a result of the valve being open all the time. The lower temperature in open valves is thought to be the cause of the higher fuel usage. This results in lower combustion temperatures for the fuel.

4. The car stalls when idling frequently

When the EGR valve is open, exhaust gas is constantly flowing into the EGR system, causing the engine to stall.

5. Smell of exhaust gases inside the car

If the gas is flowing continuously, drivers will often detect the odor of exhaust gases. As a result, the scent of burning fuel will be amplified significantly.

The check engine light comes on whenever your EGR valve detects a problem and the car’s computer records an error. For more information about the EGR valve, you’ll want to use a scanner. Preventing the EGR valve from failing is preferable.

If the EGR valve isn’t working properly, the car will produce more emissions. It has already been reported that the valve becomes caught when the temperature drops, preventing the fuel from completely burning.

What are the possible causes of stuck-open EGR valve? Currently, the EGR system is found in a large number of newer automobiles. In order to remove hazardous compounds from the exhaust, the recirculation of exhaust gas is the primary goal.

EGR improves fuel economy and reduces emissions. As time goes on, problems with the EGR valve may arise, such as the valve becoming jammed open. The following are some potential causes of an EGR valve that is jammed open or closed.

When the fuel and air are mixed exactly, the result is full combustion. As a result, testing the EGR valve is critical.

A faulty EGR gasket is another common cause of a stuck open or closed EGR valve. Using a broken gasket will cause exhaust to flow into your engine, so avoid using it at all costs. You’ll need to buy a new gasket to fix this issue.

The primary function of the EGR system is to minimize nitrogen oxide emissions. When it comes to your engine, the EGR valve’s primary function is to maintain proper pressure and temperature in the cylinder.

The EGR valve can get stuck open if you’re using a malfunctioning temperature sensor. You must replace any broken sensors to fix this issue.

The exhaust gas return (EGR) pipe is the conduit through which exhaust gases are sent back to the engine. Soot and other contaminants abound in the exhaust that passes through this pipe. These compounds build up in the EGR pipes over time, causing them to get clogged.

The EGR valves might become stuck open due to clogged pipes, increasing fuel usage. Detach the EGR valves and use a cleaner to saturate the interior of the valves.

As time passes, chemicals build up in the EGR. A buildup of chemicals on the EGR pipe can make it difficult for the EGR valve to open properly over time.

Whether the valve is open or closed, it can get stuck. A simple EGR pipe cleaning can alleviate most of these issues.

How to fix an EGR valve that is stuck open?

Repairing an EGR valve that is jammed open is rather simple. You must first identify the root cause of the issue before deciding on a course of action. Here are a few ideas to get you started:

Can you drive a car with an EGR valve that is stuck open?

No start, stalling at idle, engine misfire, and popping noise are all symptoms of an open EGR valve. Although technically conceivable, driving a car with an EGR valve is not recommended due to increased fuel consumption, shaking idle, and rough running.

Should you repair the EGR or replace it?

The EGR valve on an automobile has a ten-year average lifespan. To get the most out of your EGR valve, make sure you keep it well-maintained. Depending on the extent of the damage, some EGR valves can be repaired; others, however, are beyond repair.

In a word, the Exhaust Gas Recirculation lowers the combustion temperature while also reducing the amount of Nitrogen Oxide emitted by the intake manifold through which it operates.

As a result, the EGR valve is used for air regulation. The EGR valve gets jammed for a variety of reasons. In order to fix EGR valves that are stuck open, make sure to follow the steps outlined above.