Fuel is required to start an internal combustion engine. A pump transports it from the tank to the engine. Only at the end of the pump does gas enter the tank, which is why the pump is submerged. Gasoline from the tank is absorbed by this component, which then transports it to the injector ramp.

What is a fuel pump?

The fuel pump is a critical component in the car’s operation, yet it is prone to failure. When the engine is running, the battery’s electric current activates the fuel pump, which is then regulated by the engine control module. Pumps can be in-line or external (located away from the gasoline tank) depending on how they are installed. Pumps mounted in tanks are also an option (mounted inside the fuel tank). 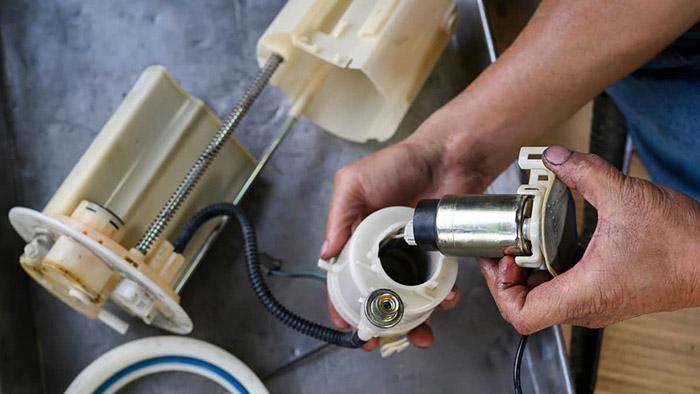 Outside of the fuel tank, the external fuel pump pulls fuel from the moving rotor of the ferrite motor and delivers it to the fuel supply circuit.

The components of the external fuel pump are:

How does an external fuel pump work?

When the rotor spins, it generates a centrifugal force that pulls the outer section of this spacer along the wall, generating a vacuum area between the rollers and this spacer, which will be filled with gasoline.

The rollers rotate, expanding the area and allowing fuel to exit. Increased pressure will be released by the gasoline as a result of this movement, which causes a decrease in exit space and a rise in pressure through the engine armature’s control valve.

A damper in the gasoline supply circuit is then used to control how much fuel is pumped. The pump’s suction compression release cycle can be completed in just one rotor rotation during operation.

It is common practice for car manufacturers to employ in-tank fuel pumps due to its advantages in reducing sound and vapor obstruction.

Using a reasonably high intensity current and a control relay, the pump is powered by a direct current motor with a check valve and an overpressure/safety release valve.

Electric fuel pumps (Ex.Bosch pump) are manufactured to meet the highest quality standards and are specifically tailored to each type of engine.

Electric fuel pumps are responsible for ensuring that the engine receives enough fuel at the proper pressure for injection under all conditions of operation. Modern direct injection systems, both for gasoline and diesel engines, increasingly require a pre-supply pump like this one. For the most part, you’ll need to:

What are the most common symptoms of a bad fuel pump? 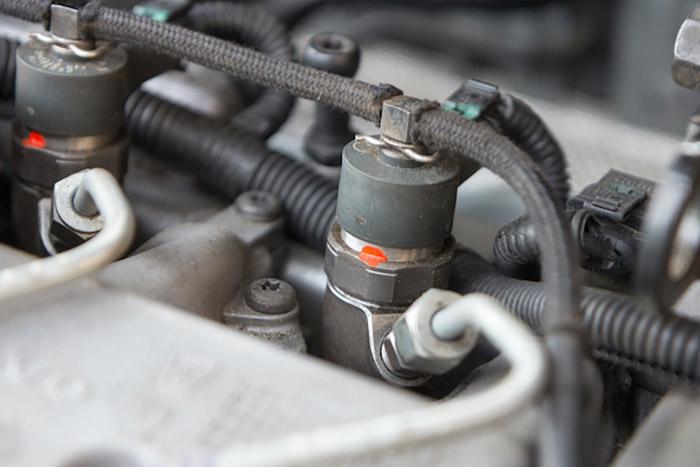 What are the most common causes in which a car fuel pump can fail?

For the best results, pay attention to the symptoms and utilize a car tester or a car scanner that is compatible with the make of the vehicle you wish to test.

Preventative measures are always better than corrective measures, so every driver should:

How to test the fuel pump

Suspend the relay to direct the fuel flow directly to the pump when testing the fuel pump. If the relay is bypassed and it still functions, this indicates that either the relay itself is defective or the electrical circuit that supplies the relay is defective. To bypass a relay, you need to know which terminals to jump in order to get around it. The fuel pump’s electrical diagram must be consulted (from a manual or online).

A bypass connects the outgoing and incoming streams. Older models had a plastic line for this function, and if it became blocked, it would quickly empty the tank, causing the gas pump to catch fire. Modern automobiles feature a directional valve and a hole (bypass valve) that serve the same purpose, as well as a bypass relay. The outcome is the same for both of them. Eventually, the pump dies.

The fuel pump can be powered up and tested with the help of a bypass tool for the fuel pump relay. Check the pressure in the fuel tank (30 to 80 psi). Fuel injection engines are extremely sensitive to the amount of fuel pressure. Fuel ramp pressure in an engine can be as little as several milligrams below specification without affecting performance.

For each year’s model of a certain vehicle and its individual fuel injection system, the pressure parameters will be different. When diagnosing fuel-related performance concerns, always check for pressure specifications.

Diagnosing your car yourself to avoid damaging the fuel pump

As long as the engine is idle, the fuel pressure must remain within acceptable limits. If it’s smaller, here are the likely causes. A bad fuel pressure regulator or an inefficient pump (e.g. one with intermittent supply voltage due to a faulty contact or one with a 125 micron sieve in the pump’s internal filter that is blocked) can all cause low voltage at the pump. Other causes include clogged internal filters, faulty pumps, and a nearly empty tank.

Ideally, fuel pressure should be immediately apparent and stable when the ignition switch is turned on and the engine turned off (i.e. when the fuel pump is functioning). Take a look at your reading and compare it to the manufacturer’s specs.

It is possible that a lower pressure measurement than the manufacturer’s specifications is the result of a problem.

Inefficient pump (see above), malfunctioning pressure regulator, blocked filter, line, or intake nozzle, clogged fuel tank: these are the most common causes of fuel pump failure. A regular pressure cannot be generated since the pump cannot rotate quickly enough because of the low voltage (it could just be an insufficiently charged battery). Check the gasoline filter and obstruction lines if the voltage reading is within the manufacturer’s recommendations. A good pump could be in place. Otherwise, you may need to double-check the pump voltage. The gasoline pump is defective if voltage is present but the pump does not operate.

For a few minutes after you turn off the pump, the system must retain the remaining pressure (by consulting the specifications you can find out exactly what pressure must be maintained for a certain period). There may be a one-way valve on the damaged flow line or a leak in the fuel pressure regulator, all of which can cause an abrupt drop in pressure.

In order to determine whether or not the fuel pump is functioning properly, even if it produces normal fuel pressure, a test of the pump’s capacity to deliver sufficient gasoline to the engine is a useful tool.

For a certain time period, a fuel volume test is used to determine how much fuel was delivered. A fuel flow indicator can be attached to the supply line, or the return line from the fuel pressure regulator can be disconnected and a hose attached to the regulator so that all of the tank’s fuel can be drained.

A lower-than-average volume of fuel given in a predetermined time period (for which we have manufacturer standards) is allowable.

Fuel flow is slowed down due to several factors such as an old or clogged pump or filter, a gas pipe blockage, the suction of the pump itself being blocked, the tank being nearly empty, or a low voltage at the pump itself.

The fuel pressure regulator is put to the test with this. When the engine’s vacuum varies, this valve adjusts the pressure in the pipe to keep the injectors operating at their optimal pressure while also compensating for changes in engine load.

How much it costs to replace a bad fuel pump?

A new fuel pump and labor can cost anywhere from $350 to $700 at a workshop, depending on the year, make, and model of your car. A few hours of your time and a few inexpensive tools will be required if you decide to replace the fuel pump yourself.