Georgia Window Tint Laws That You Should Know Updated 11/2022

Window tinting for cars is a great idea. It blocks heat, cuts down on glare, and makes it easier on your eyes.

Today, window tint can be added after the fact, which makes it easier than ever.

In Georgia, where it can get as hot as 110°F in the summer, window tinting is a great choice for many.

Window tinting is legal in Georgia, but you should be aware that there are rules to follow.

If you break these laws, you could get pulled over and even be charged or put in jail.

Even though you probably won’t go to jail for having your windows too darkly tinted, it’s still a good idea to find out what the rules are before you paint your windows black.

How do You Measure Window Tint?

To figure out how much window tint is allowed, there needs to be a way to measure how dark the windows are.

The amount of light that gets through a tinted window is measured by the visible light transmission (VLT) percentage.

The higher the number, the more light that can get through (e.g. 10 percent means only 10 percent of the light is getting through)

Using this standard measurement, law enforcement can use a special tool to figure out if your car’s windows are too dark or not.

There can be a 3 percent difference.

Window tint can only be a certain size, which is set by VLT, but you also have to think about how the tint will look when it is reflected.

The amount of light that a tint blocks is called its reflection.

The more light is reflected, the higher the percentage. Having tinting that reflects light can help a lot with cutting down on heat and glare.

According to Georgia law, a window tint can’t reflect more than 20 percent of light.

All vehicles in Georgia are subject to this limit.

Can You Get Pulled Over for Tint in Georgia?

With all of these rules, it’s natural to wonder: Can you get pulled over in Georgia for tint?

When the Georgia tint laws went into effect in 2005, you could be charged or given a fine if you broke them.

There is also the chance of going to jail for up to a year.

Even though these punishments seem harsh, keep in mind that they probably won’t be used, at least not to their full potential.

If you break tint laws for the first time, you will probably get a “fix-it” ticket and a fine of between $25 and $100.

If you get caught again after the first warning, you will probably have to pay a fine of $200 or more

How Much Tint is Too Much? 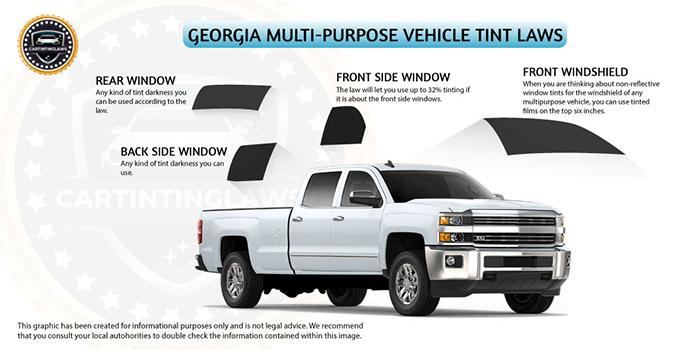 So, what is the most you can tint your windows?

Well, it depends on what kind of car it is. There are different standards for different types of vehicles.

There are also exceptions to the laws when it comes to health.

In Georgia, there are two types of vehicles: passenger vehicles and vehicles that can be used for more than one thing.

Passenger vehicles include sedans and other cars for families, while SUVs and vans are called “multi-purpose vehicles.”

All passenger vehicles have to have a VLT of at least 32%.

Both the side windows and the back windows can have a VLT of 32% or more.

But you can only tint the top 6″ of the windshield, and it can’t be reflective.

Multi-purpose vehicles can only have the top six inches of their windshields tinted, just like passenger cars.

It still needs to be non-reflective and have a VLT of at least 32%.

The front side windows must also have a VLT of 32% or more, but the back side windows and back windows don’t have to be a certain level of tint.

You can get an exception to the tint laws if you fill out the application, give a statement from a state-licensed optometrist or doctor, and pay the $10 application fee.

If your health problem can be fixed by wearing protective eyewear, you won’t be given an exception.

If your application is approved, you can tint your windows to a VLT of no less than 23 percent (with the allowed 3 percent variance).

When you tint your windows in Georgia, you also have to think about a couple of other laws.

First, you can have coloured window tint except for red and amber.

Second, there are no rules about how dark your side mirrors can be, so you can do whatever you want with them.

Legally, you don’t even need side view mirrors unless you can’t see out of your rearview mirror.

The state also requires manufacturers of tint to have certifications.

If you buy a tint that has been certified, it will be within the state’s legal limit.

When it’s all set up, there will also be a sticker on your windshield that says it’s a legal tint.

The sticker is required by state law.

To beat the heat and cut down on glare while driving, you must tint your windows.

Even a small tint can make a big difference, even if the rules about it seem too strict.

As long as your window tinting is at least 32 percent VLT and you follow the rules for your type of vehicle, you shouldn’t have any trouble with the law.

Just make sure that the people who tint your windows are state-certified and avoid tints that are red, amber, or too reflective.

Always remember that Georgia’s laws about window tinting are there to make driving safer for everyone.

What Causes Transmission Problems After Cv Joint Replacement
Car Hood Won't Close
What Happens If My Drive Shaft Breaks While Driving
Is It Illegal To Sleep In Your Car In Indiana ?